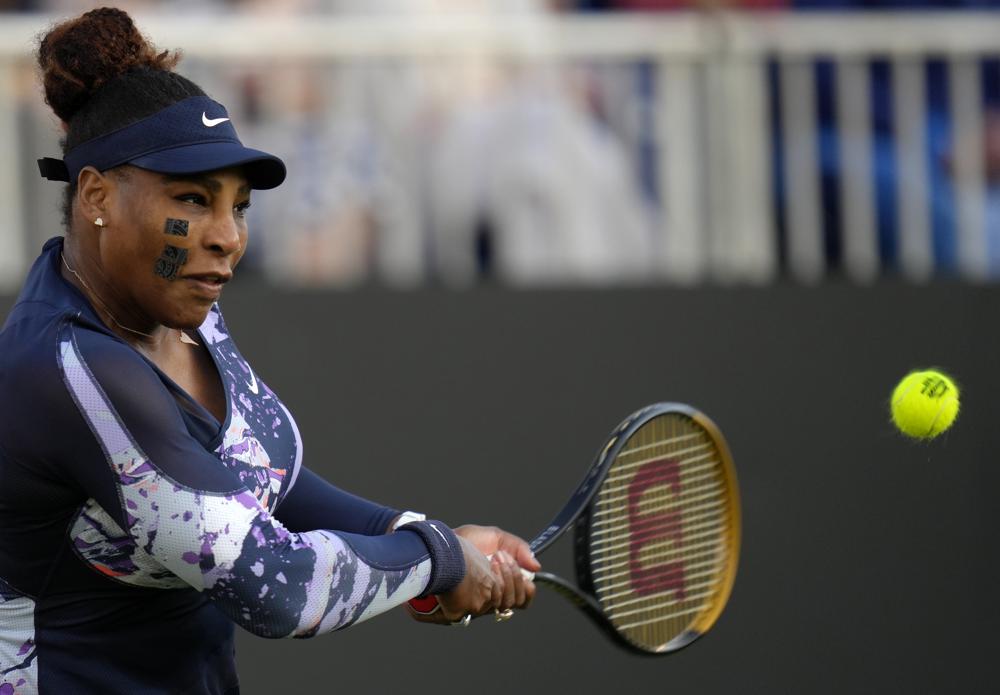 Serena Williams wins 1st match of comeback after year away

Serena Williams wins 1st match of comeback after year away

EASTBOURNE, England (AP) — As “What A Feeling” boomed around Devonshire Park, Serena Williams strode onto center court at Eastbourne to a standing ovation for her first competitive tennis match in nearly a year.

Around 90 minutes later, fans were on their feet again, celebrating a comeback win for the 23-time Grand Slam singles champion at the Wimbledon warmup event on England’s south coast.

Williams partnered Ons Jabeur to victory over Sara Sorribes Tormo and Marie Bouzkova in the first round of the women’s doubles on Tuesday. Williams and Jabeur recovered from losing the first set 6-2 to win the second 6-3 and then the match tiebreaker 13-11 on their third match point.

“I caught some fire behind me,” the 40-year-old Williams said. “I needed that. It was good.”

The win means Williams will have at least one more competitive match before playing singles at Wimbledon as a wild-card entry. Main-draw play at the All England Club starts Monday.

It was at the grass-court Slam where Williams was last seen in competitive action in 2021. She was playing in the first round when she lost her footing and her right leg buckled, leading to Williams retiring from the match.

With no competitive activity since then, she is ranked No. 1,204 in singles and wasn’t among the seeded players announced by Wimbledon on Tuesday. Few will want to face her when the draw is made Friday.

“I love tennis and I love playing otherwise I wouldn’t be here but I also love what I do off the court,” Williams said.

Williams — sporting three black patches on her right cheek — made a slow start to the match alongside Jabeur that marked her third appearance at Eastbourne, having previously played in the singles event in 1998 and 2011.

She served first — her opening serve was timed at 90 mph (145 kph) and earned the first point after Sorribes Tormo’s reply sailed long — and held to 30.

Williams struggled at times in the first set, and was exasperated after she was unable to get low enough to a shot by Sorribes Tormo. It took 25 minutes before Williams hit a winner as her smash flew into the North Stand, ensuring one spectator was able to leave with a souvenir.

Williams’ agility improved noticeably in the second set, though there were audible gasps from the crowd when she slipped rushing into the net.

She set up a set point with a backhand winner from the baseline and took the match to a tiebreaker with a 102 mph ace.

Williams showed desire to dive to her right to make a volley which could not be returned that set up one of the three match points. The win was clinched when Sorribes Tormo miscued a volley.

“It was so fun to play with Ons,” Williams said in an interview on the court. “It was great. We had a lot of fun and our opponents played amazing. We were happy to stay in there.”

There were wins in the second round for defending champion Jelena Ostapenko and Beatriz Haddad Maia, who has won back-to-back grass-court events in Nottingham and Birmingham over the last two weeks.