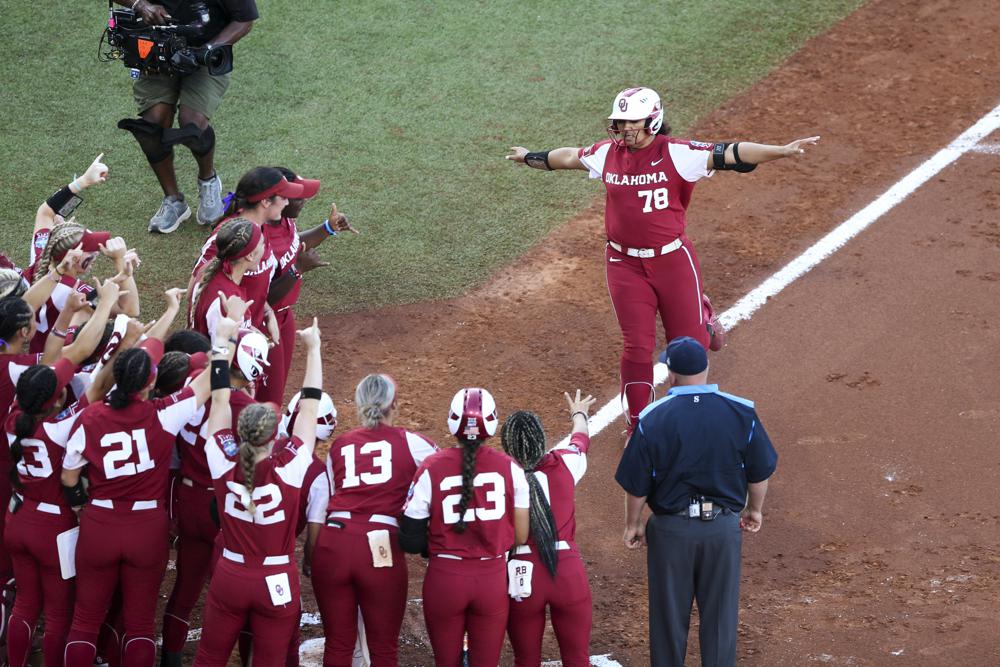 Each hit two home runs and top-seeded Oklahoma rolled past unseeded Texas 16-1 on Wednesday night in Game 1 of the best-of-three championship series.

“It was like an avalanche,” Texas coach Mike White said. “Once it starts going, it starts gathering steam, and it’s harder to get it to stop.”

A championship series-record crowd of 12,234 watched the show.

Alo set a single-game World Series mark with five runs and now has set the single-series record for runs scored with 11. She went 3-for-3 and increased her batting average to a nation-leading .527.

Alo and Jennings each have five home runs in the World Series, surpassing the single-series record of four set by several players, including Alo last year. Alo increased her career Division I homer record to 122, and Jennings drove in five runs to set a record for RBIs in a series with 14.

They had plenty of help — Oklahoma had 16 hits.

“They’re really frickin’ good,” Texas catcher Mary Iakopo said. “Hats off to their one through nine.”

Alo’s second homer was her 34th of the season, matching the Oklahoma school record she set last season. Oklahoma coach Patty Gasso said she now expects homers when Alo steps to the plate.

“It’s ridiculous that I’m thinking that way,” she said. “But I see her at practice every day. I see what she’s capable of. It’s just so tough to beat her. She’s so strong.”

The teams will meet again Thursday in Game 2, with Oklahoma in position to win its sixth national title. Texas (47-21-1) needs a win to stay alive. The Longhorns have won six elimination games since the start of the NCAA tournament.

“Just remember that the worst has already happened and play carefree, loose,” Iakopo said. “That’s all we can do.”

Oklahoma does not intend to play a third game.

“We’re prepared,” Alo said. “We’re going to have the momentum. It’s time to win another ballgame.”

Oklahoma escaped a bit of difficulty in the first and controlled the game from there. Hope Trautwein (22-1) gave up just two hits and a run in five innings, and Nicole May allowed just one hit in two shutout innings.

Alo cranked a no-doubt home run into the left field seats in Oklahoma’s half of the first, and Taylon Snow followed shortly afterward with a three-run blast — just her fourth home run of the season — to make it 5-1 heading into the second. Texas used three pitchers in the inning, and ace Hailey Dolcini (24-12) registered just two outs before getting pulled.

Fortunately for Texas, none of those runs will matter on Thursday.

“Nothing from today carries over,” Dolcini said. “So you learn from it and you try not to make the same mistakes again. Then we just come out and play loose. I think we lost a little bit of that today.”