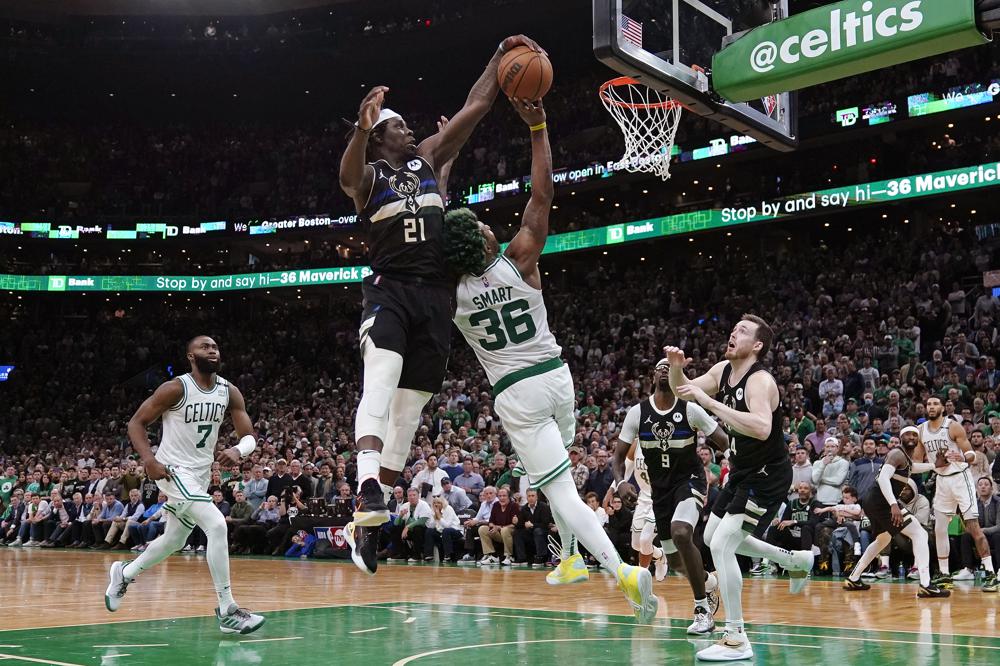 BOSTON (AP) — Giannis Antetokounmpo was having his best shooting night of the playoffs. Milwaukee dominated on the boards. And still the Bucks trailed Boston by 14 points in a game that could send the defending NBA champions to the brink of elimination.

The Bucks are in Milwaukee on Friday looking to get back to the Eastern Conference Finals. Tune in for Game 6 on WKTY. Pregame on 96.7 FM / 580 AM begins at 5 p.m.

That’s when Jrue Holiday showed the Defensive Player of the Year a thing or two about defense.

“Obviously, in Boston you’re down 14 in the fourth quarter, people would say everything’s against us. But we come together,” said Holiday, who also hit the tying 3-pointer with 43 seconds left. “We live and die like that.”

Antetokounmpo had 40 points and 11 rebounds, making 16 of 27 shots — including a long 3-pointer to make it 105-102 with 1:40 to play. Holiday finished with 24 points, eight rebounds and eight assists and Portis added 14 points and 15 rebounds. The Bucks can advance to the Eastern Conference finals with a victory in Game 6 at home Friday night.

Jayson Tatum scored 34 points and Jaylen Brown had 26 for the Celtics, who need a win in Milwaukee to force a decisive seventh game back in Boston on Sunday.

The Celtics led 93-79 early in the fourth before the Bucks closed the gap, tying it at 105 with 43 seconds to play on back-to-back 3-pointers from Antetokounmpo and Holiday. Tatum hit a pair of free throws to give Boston back the lead.

Antetokounmpo went to the the line with a chance to tie it and made the first, then Portis grabbed the rebound of the second and put it in off the backboard to give Milwaukee its first lead since early in the second quarter.

Smart drove to the basket but Holiday blocked him and came away with the ball, throwing it off the Celtics guard while falling out of bounds.

Youtube video thumbnail
Pat Connaughton made a pair of free throws with six seconds left, then Holiday stole the ball from Smart on his desperation dash for a potential game-tying 3-pointer. The Celtics committed eight of their 10 turnovers in the second half and gave up a 49-36 rebounding edge in all.

“If we box out we win that game,” Smart said. “They’re the defending champs. They made some championship plays. And now we’ve got to bounce back.”

“Growing up as a kid, I really wasn’t very skilled or really had one thing I really did well. I was always like a jack of all trades, did everything good but nothing great,” Portis said. “My mom always told me as a kid just to be a garbage man. Being a garbage man is if you want scoring opportunities and you’re not getting the ball passed to you, you go get the ball on the offensive glass. That’s one thing my mom always taught me. Shoutout to my mom on that.”

“Of course, we’re gonna be down. Guys are going to be (upset) about the outcome. We outplayed them for 3½ quarters,” Celtics coach Ime Udoka said. “We talked about showing our resolve, and we made it tougher on ourselves now. It’ll make it sweeter when we bounce back. But we gave up a golden opportunity tonight.”

The Celtics were without big man Robert Williams III for the second straight game — and the fourth time this postseason — because of left knee soreness. He had been listed as questionable before being ruled out pregame.

Milwaukee remained without Khris Middleton, who has done some on-court work as he attempts to come back from a sprained left knee. He has not played since April 20 in Game 2 of the first-round series against the Bulls.

“He’s done a little bit on the court and we’re feeling good about where he is and optimistic,” Bucks coach Mike Budenholzer said. “But it’s kind of the same update it’s been for the last handful of days”

Tacko Fall, the 7-foot-6 former Celtic, took in the game from the front row, under the basket. Massachusetts Gov. Charlie Baker and New England Patriots owner Robert Kraft were also at the game. … The Celtics only had two turnovers in the first half, to nine for the Bucks. … Celtics subs Daniel Theis and Derrick White made their first nine shots.

TOP PHOTO: Milwaukee Bucks guard Jrue Holiday (21) blocks a shot by Boston Celtics guard Marcus Smart (36) in the final seconds of play during the second half of Game 5 of an Eastern Conference semifinal in the NBA basketball playoffs, Wednesday, May 11, 2022, in Boston. The Bucks won 110-107. (AP Photo/Charles Krupa)