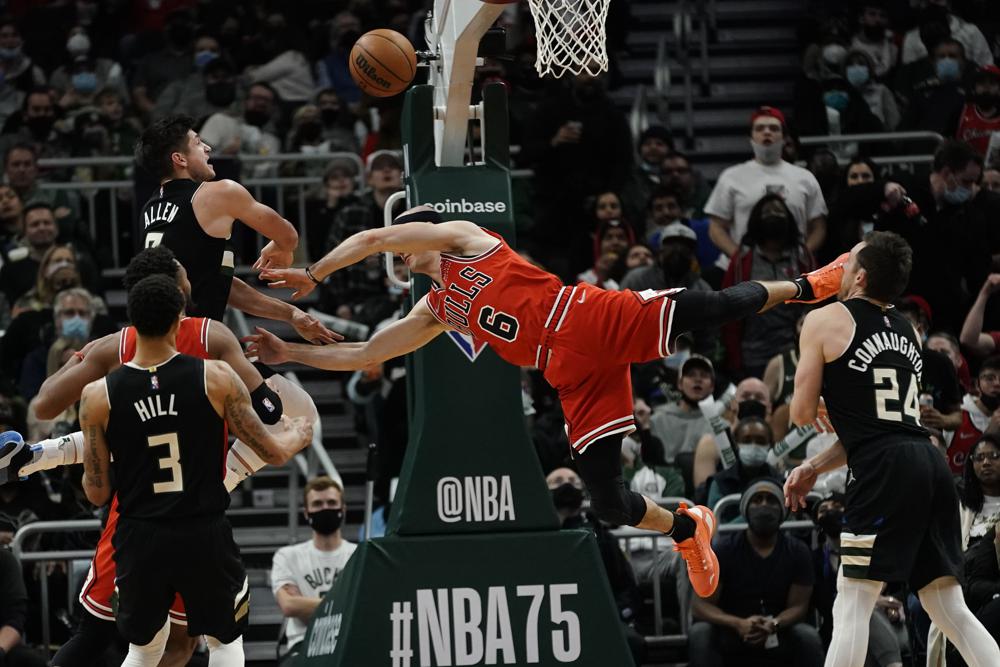 NEW YORK (AP) — Milwaukee Bucks guard Grayson Allen was suspended by the NBA for one game on Sunday for his hard foul on Alex Caruso that resulted in a broken right wrist for the Chicago Bulls guard.

Allen will serve his suspension Wednesday when the Bucks visit the Cleveland Cavaliers.

Caruso was driving to the basket Friday night when a hard foul by Allen caused him to land on his right side. Caruso lay on the floor for a few minutes, though he stayed in the game to attempt the free throws that resulted from Allen’s flagrant 2 foul.

The Bucks visit the Cleveland Cavaliers on Wednesday before hosting the New York Knicks on Friday.

“We disagree with the suspension,” the Bucks said in a statement. “We support Grayson and look forward to him rejoining our team for Friday’s game versus New York.”

The Bulls announced Caruso’s injury on Saturday. The team said he needs surgery and will be re-evaluated in six to eight weeks.

Bulls coach Billy Donovan said of the suspension that the NBA “has to evaluate those situations based on their criteria that they set up … maybe there are people who think, ‘You know what, he should be out as long as Alex is out.’ All of those things, they’re out of my control and they’re not my decisions.”

Donovan also said before Sunday’s game in Orlando that the best thing is to move on.

“I’m not going to sit up here and say what the league should or should not do or what’s sufficient,” he said.

Chicago is without guards Zach LaVine, Lonzo Ball and Javonte Green. Donovan said LaVine and Green worked out in Chicago on Sunday morning and are scheduled to join the team in Oklahoma City on Monday, when they could potentially play against the Thunder.

Caruso, who is in his first season with the Bulls, had averaged 8.4 points and career-best totals in rebounds (3.9), assists (3.9) and steals (1.9) in 28 games. He was playing in just his second game back after missing more than a month because of a foot injury and a stint in the NBA’s health and safety protocols.