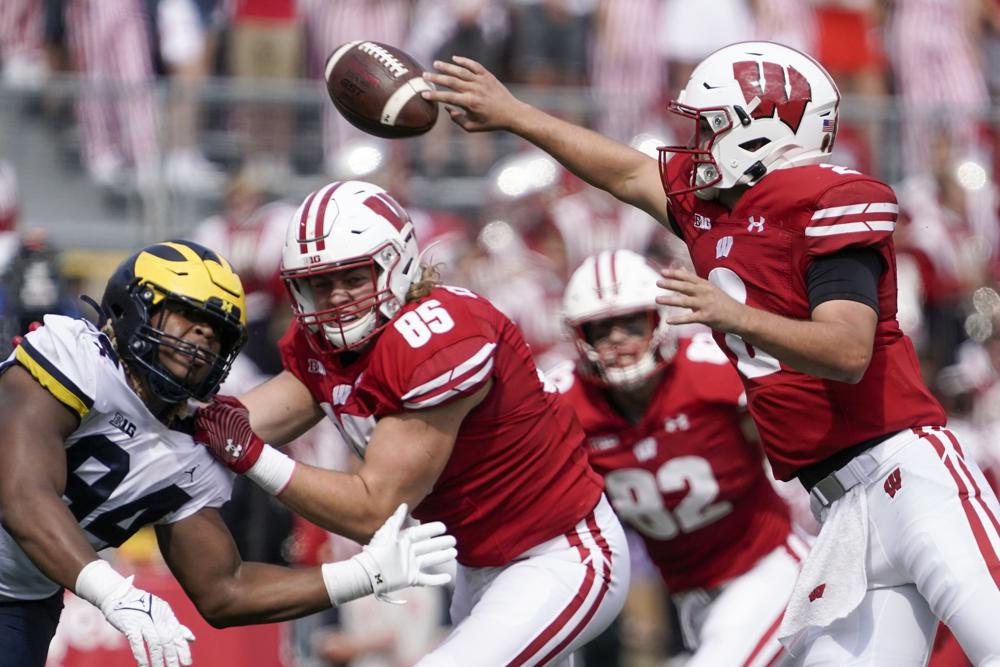 Struggling Wisconsin looks to bounce back against Illinois

Struggling Wisconsin looks to bounce back against Illinois

CHAMPAIGN, Ill. (AP) — Wisconsin will try to get back on track against Illinois on Saturday after suffering consecutive losses for just the fifth time in seven seasons under coach Paul Chryst.

Standing in the Badgers’ way is former coach Bret Bielema and an Illinois squad that has also stumbled this season.

Bielema, in his first year at Illinois (2-4, 1-2), understands the pressure and interest surrounding playing his old team. Chryst was an offensive coordinator on Bielema’s Wisconsin staffs from 2006-11.

Chryst said he sees some similarities between what Bielema is doing at Illinois and what he did during his tenure at Wisconsin.

“I think in knowing him and what he values in his team, you’re seeing that on film,” he said. “Obviously a lot of respect for him, and I think he’s put together a really good staff. You do see it.”

Wisconsin quarterback Graham Mertz and tight end Jake Ferguson are expected to play on Saturday. Both suffered chest injuries in the Michigan game and were initially listed as questionable for the Illinois game. Mertz and Ferguson connected on three of Mertz’ five touchdown passes in Wisconsin’s blowout of Illinois last season.

Illinois appears to be staying with Brandon Peters, despite some poor game decisions and accuracy problems. Backup Art Sitkowski is available should Peters falter.

ALL ABOUT THE DEFENSE

Wisconsin ranks third in the nation and leads the Big Ten in total defense, allowing just 249 yards per game. The Badgers also rank seventh in the country allowing just 4.3 yards per play.

“Statistics are great, they’re a great thing to reference, but the key ingredient is what worked Saturday (a 24-14 win over Charlotte),” Bielema said. “What we did on Saturday is what our offense is going to be greatly dedicated to this week.”

Illinois has held opponents to 20 points or fewer in three straight games for the first time since 2011, when it had a streak of four straight to start the season. The Illini have forced at least one turnover in each game and are averaging 2.5 sacks per game.

The Illini have given up 292.2 yards passing per game, which ranks 119th in FBS.

Illinois has been without two of its top defenders in linebacker Jake Hansen and cornerback Devon Witherspoon the past two games due to undisclosed injuries. Both are questionable for Saturday.

Brown rushed for 257 yards against Charlotte last week and tied his career high with two rushing touchdowns. His 257 yards were the fourth-most in a game in school history. McCray ran for a career-best 156 yards on 24 carries against Purdue on Sept. 25. The yardage was the most by a true freshman in college football in a road game this year.

Wisconsin has won 10 of its last 11 meetings with Illinois. Since 2003, the Badgers have left Memorial Stadium with a win in six of their last eight trips to Champaign.

TOP PHOTO: FILE – Wisconsin’s Chase Wolfflips the ball as he is hit during the second half of an NCAA college football game against Michigan Saturday, Oct. 2, 2021, in Madison, Wis. (AP Photo/Morry Gash)