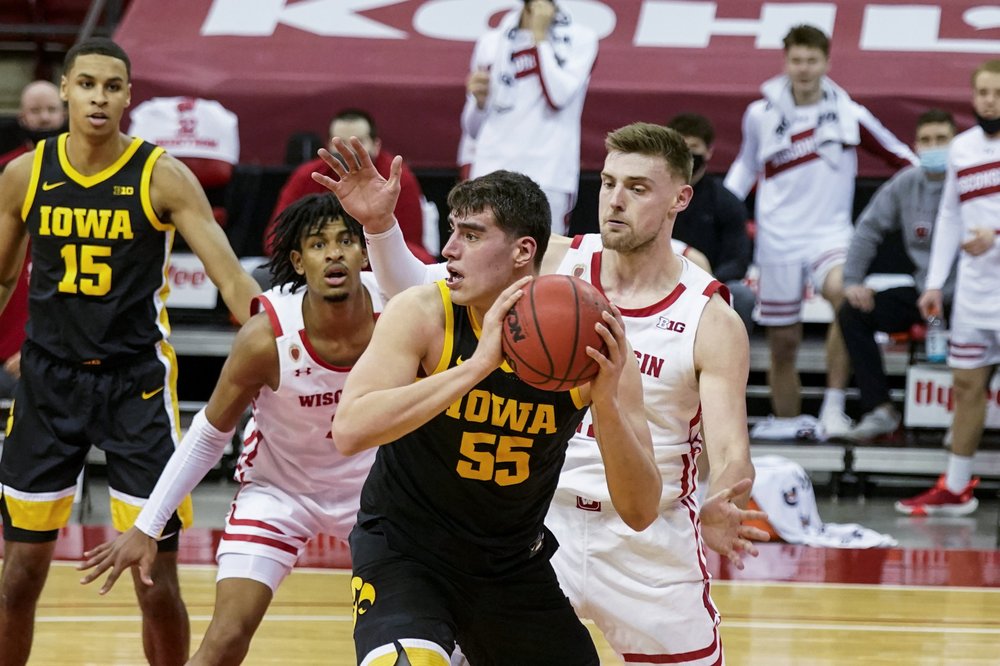 INDIANAPOLIS (AP) — Luka Garza knew what everyone expected before returning for a final run as Iowa’s unquestioned star.

Pressure? Garza felt it, all right, enough to know his mental health required the same attention as his game.

“I needed meditation to lean on, to be able to mainly just go out there and be myself and not worry about anything else,” Garza said.

That best explains why the 6-foot-11, 265-pound senior is The Associated Press men’s college basketball national player of the year after finishing second last season. He was the runaway choice for the award announced Thursday, receiving 50 of 63 votes from AP Top 25 voters.

Garza ranked second nationally by averaging 24.1 points with 8.7 rebounds. He improved shooting percentages across the board – including going from 36% on 3-pointers last year to 44% – and his assist-to-turnover ratio after working on passing ahead of double- and triple-teams he knew would come all season long.

Garza led the Hawkeyes to a No. 2 seed in the NCAA Tournament, then accounted for nearly half their points (36 of 80) in a second-round upset loss to Oregon. The native of Washington, D.C., finished as the career scoring leader (2,306) at Iowa, which will retire his No. 55 jersey.

“We may never see another one like him,” coach Fran McCaffery said.

Sure, he had the big numbers and helped the Hawkeyes spend nearly the entire season in the top 10 nationally. But Garza figures the daily ritual of resetting his mind while focusing on something as simple as his breathing led to all of that — particularly in a season altered by the COVID-19 pandemic.

“You had to be in your house quarantined, going to the gym, going home,” Garza said. “There’s no distraction. If you play a bad game, that’s all you’re thinking about. So you need to be in a healthy mental space or you would just let it eat at you – especially a person like me who thinks as much as I do.

“I needed it to be a daily thing because I faced this anxiety every single day. It definitely became something that helped me out a lot and contributed to my being able to be there and be in the moment every single game and every single day.”

Garza was second to Dayton’s Obi Toppin for last year’s award. It was during that season that he began gameday meditation at the suggestion of his father, a former player at Idaho.

As Frank Garza put it: “It’s worth taking the mind to the gym.”

“Every player deals with that performance anxiety and overthinking, so he was not immune to it,” the elder Garza said. “But what happened as the stakes got higher, and the performance requirement was higher, the pressure becomes at the same level. And if you’re not dealing with it, that will consume you. That will eat you alive.”

“I got to a point where I was waking up and I did a meditation every single day throughout the season because it was a daily thing that I was dealing with,” he said. “I’d turn on the TV and my name was being talked about. I needed to be able to just focus on what I wanted to accomplish as a team.”

Some of that bled into games, too, with Garza practicing breathing exercises before free throws or during timeouts.

He’s sticking with meditation, too, as he pursues an NBA career. He has all the proof he needs that it can work.

“There’s a lot of things in life that you want to happen or want to go better than they are and everything like that,” he said. “So it’s going to hit somebody at some point, and it’s just a very useful tool for really anybody.”