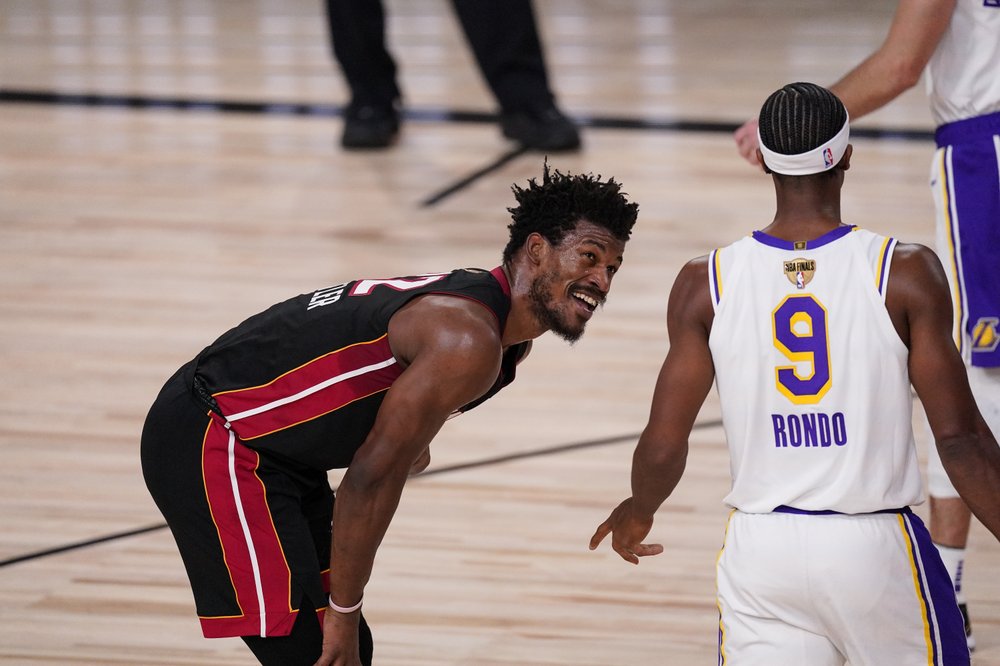 Butler loses last game in the bubble after memorable run

Butler loses last game in the bubble after memorable run

Jimmy Butler finally has to take his business elsewhere.

There will be no more coffee customers with the bubble closing down, though he kept it open far longer than expected with some of the most inspired NBA Finals play seen in years.

Butler carried the Miami Heat all the way to Game 6 against the favored Los Angeles Lakers but the weight of his efforts seemed to leave him with little energy Sunday. He struggled to initiate the offense, was caught flat-footed on defense and was helpless along with his teammates to stop a Los Angeles onslaught in the second quarter.

The Lakers capped off another championship with a 106-93 victory, a series that once seemed destined to be a sweep that Butler almost single-handedly extended two games longer than that.

He became the first player with multiple triple-doubles of 35 or more points in an NBA Finals, and through five games was averaging 29.0 points, 10.2 assists, 8.6 rebounds and and 2.60 steals — statistics no player ever finished with in a finals.

He wasn’t close to those numbers Sunday, finishing with 12 points on only 10 shots.

It was understandable after what Butler had to do just to get it this far.

There was a 40-point triple-double to win Game 3 with the Heat down 2-0, then 35 points, 12 rebounds, 11 assists, five steals and just 48 seconds of rest on Friday to help Miami put the Lakers’ celebration on hold in Game 5.

He leaned over a board in exhaustion late in that one, and fewer than 48 hours didn’t appear to be enough time to recover. Rajon Rondo blew by him a couple times on drives to the basket early Sunday and Butler’s bulldozing drives into the paint were lacking.

“I didn’t win so none of the stats matter,” Butler said. “We don’t play for stats here, we don’t for anything else except for the win. I didn’t (get) that, I didn’t do my job and I’ll be better.”

Still, everything he did on and off the court to get the fifth-seeded Heat from the middle of the pack to the top of the Eastern Conference is what will be remembered.

“He is a winner, he is a leader, he is a motivator, a mentor and just a supreme competitor,” Heat coach Erik Spoelstra said. “And when you get to this level I think so many people forget about that, the competition and what you can bring out of an entire franchise when you’re wired to that level of fierce competitiveness.”

Butler had to carry the load for the Heat much of the finals after Goran Dragic and Bam Adebayo were injured in Game 1. Adebayo missed the next two games and Dragic didn’t return until Game 6.

But Butler made no excuses, not only saying the Heat could win, but that they should win.

With all he overcame to get this far, no wonder he thought he could also overcome the top-seeded Lakers.

He didn’t arrive in the NBA like LeBron James or Anthony Davis, No. 1 picks who were expected to head straight to stardom. Instead, he played a year of junior college basketball before being the last pick of the first round in 2011 by Chicago after coming out of Marquette.

Butler went on to multiple All-Star selections and an Olympic gold medal, long ago proving himself as a player.

In Miami and especially in the bubble, Butler proved himself as a teammate and a leader.

That was in question in Minnesota, where he wanted out shortly after helping the Timberwolves end a 13-year playoff drought. The Wolves eventually dealt him to Philadelphia and Butler helped take the 76ers to a Game 7 in the second round last year, but they didn’t bring him back.

When looking at those teams now: Minnesota went back to its losing ways without Butler’s talent and tenacity, and the 76ers bowed weakly out of the bubble in a first-round sweep.

Those clubs might wish they didn’t let Butler go. The Heat won’t make the same mistake.

They have him under contract for three more seasons and both sides say it’s a perfect fit of player and organization, based on hard work, high effort and a passion for competition.

Butler’s coffee business provided a diversion during the three-month monotony of the bubble. He sold for $20 a cup to friends and foes, even trying to secure Lakers coach Frank Vogel as a customer earlier in the postseason.

“As much as the offer was appealing to me, he still was a potential enemy, so I didn’t want to go there,” Vogel said.

Denying Butler the salesman was easier for Vogel than clamping down on Butler the basketball player.

The Lakers eventually did, but Butler said he promised Spoelstra and team President Pat Riley he would win the Heat a title, so he’ll back.

“I didn’t do my job so moving forward I’ve got to hold up my end of the bargain,” Butler said.