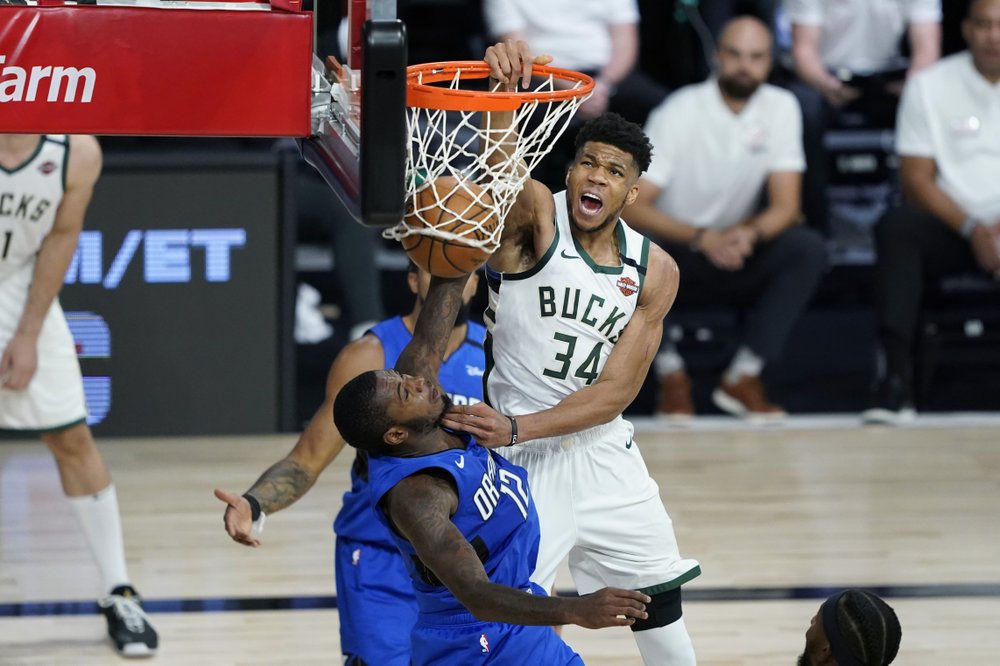 LAKE BUENA VISTA, Fla. (AP) — The Milwaukee Bucks still haven’t figured out how to slow down Nikola Vucevic. They did shut down his Orlando Magic teammates well enough to tie the Eastern Conference first-round series.

Giannis Antetokounmpo had 28 points and 20 rebounds and Milwaukee rode a fast start to beat the Magic 111-96 on Thursday night in Game 2. The victory came two days after the team that boasted the NBA’s best regular-season record opened the playoffs by losing 122-110 to Orlando.

“There’s an urgency,” Antetokounmpo said. “I’m not going to say there’s a fear factor — being down — but you know you have to be urgent.”

Milwaukee bounced back Thursday, building a 23-point lead in the first half, though Orlando got the margin down to nine in the fourth quarter. Orlando had no points in the paint for the entire first quarter and went nearly eight minutes without a basket during a first-half stretch.

Antetokounmpo said Bucks coach Mike Budenholzer set the tone for Thursday’s game with the message he delivered during a film session.

Brook Lopez scored 20 points and Pat Connaughton had 15 on 5-of-8 3-point shooting for Milwaukee. Eric Bledsoe had 13 points and Donte DiVincenzo added 11.

The Bucks withstood another huge effort from Vucevic, who followed up his 35-point effort in the opener by scoring 32 points. Nobody else on the Magic scored over 12 points.

“He’s a very, very good player,” Budenholzer said. “We have a ton of respect for him, but I think overall our defense was in a good place.”

That was particularly true in the first half.

After Vucevic made a jump shot to cut Milwaukee’s lead to four with 5:34 left in the first quarter, the Magic missed their next 13 field-goal attempts. Orlando wouldn’t make another basket and fell behind by 16 before Terrence Ross hit a jumper with 9:48 remaining until halftime.

But the Magic then missed their next six shots as the Bucks stretched their lead to 23.

“We’ve got to get the ball moving,” Magic coach Steve Clifford said. “We didn’t do that early. We did miss some shots. But definitely, their ball pressure — they were into us more, and it definitely impacted the way we played offense.”

Orlando made it somewhat interesting in the second half.

Vucevic scored 16 points in the third quarter alone to help the Magic cut the deficit to 12, though Milwaukee got the margin back up to 20 by the end of the period. Orlando continued to hang around and made it 101-92 on Markelle Fultz’s jumper with 3:56 left, but the Magic couldn’t get any closer.

Magic: Orlando again played without injured forward Aaron Gordon and guard Michael Carter-Williams. Gordon has a strained left hamstring, while Williams has a strained tendon in his left foot. “I think Aaron is closer than Mike,” Clifford said before the game. “He just doesn’t have the strength back in the leg, but actually watching him yesterday, they played some live two-on-two, and he’s moving a lot better than he was when they played on Monday. I think he’s closer, but it just depends on how things progress and how much stronger he feels by tomorrow.”

Bucks: Milwaukee needs more production from Khris Middleton. The All-Star forward scored just two points and shot 1 of 8. He has shot 5 of 20 from the floor so far in the series. Budenholzer and Antetokounmpo expressed confidence in Middleton after the game and noted that he contributed to the victory in other areas. “I’ve seen Khris come off a bad game and the next game score 30, 35, 40,” Antetokounmpo said. “I’ve seen that. Personally, I know he’s going to be ready for Game 3. He’s a big-time player.”

Orlando is trying to make sure history doesn’t repeat itself. The Magic won their playoff opener over Toronto last year before losing four straight to the eventual NBA champion Raptors.

On the other hand, Connaughton said the Bucks’ emphatic response to their Game 1 loss reminded him of their second-round series with Boston last year. The Bucks dropped the opening game of that series but rebounded to beat the Celtics four straight times.

“We respond to losses really well,” Connaughton said. “Obviously we’d prefer not to have them, but when they do happen we want to make sure we respond the following game and continue to respond game after game after game, but taking it one game at a time.”

Game 3 of the best-of-7 series is Saturday.