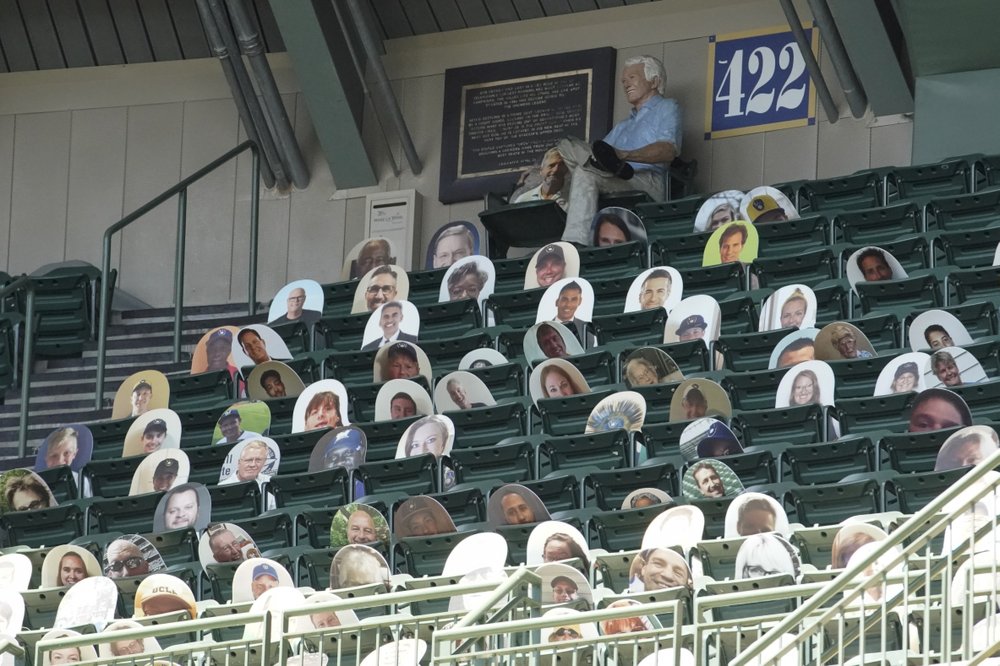 Gabby Adamo loved the Chicago White Sox so much it influenced how she dressed and even how she drank her favorite beverages.

Gabby Adamo rooted for the White Sox even during a three-year battle with leukemia. But she never got to attend one of their opening day games.

Eight months after she died at the age of 22, her parents are doing what they can to rectify that. With no spectators permitted at stadiums due to the coronavirus pandemic, the White Sox are among Major League Baseball teams giving fans the opportunity to fill some seats with their photographs on cutouts.

So when Chicago opens July 24 against the Minnesota Twins, a cutout featuring a smiling Gabby wearing a White Sox jersey and cap will be in the stands. “We’d always talked about going to opening day,” her father said. “She just always talked about the next time she’d go to a game.”

“The idea resonated with us,” said Rick Schlesinger, the Milwaukee Brewers’ president of business operations.

The Brewers sold out 500 cardboard cutouts in 90 minutes. They promptly put another 500 on sale. Now they’re also planning a “Pets in the Park” section for cutouts featuring photos of fans’ dogs or cats.

Cutouts at Miller Park will be placed in the back rows of the uppermost level behind home plate, where there is also a statue of Bob Uecker.

The opportunity enticed Will Piper, a fifth-grade teacher from Mequon, Wisconsin, who watched a 2018 NL Championship Series game from that section with his wife. He’s hoping to see himself on television.

“I’m planning on making it a game — who can find virtual ‘Pipes’ — and hopefully get some of my friends and their families to do so as well,” Piper said.

Other teams such as the San Francisco Giants want virtual fans closer to the action. The Giants will put up photos of fans alongside cutouts of Bay Area celebrities such as Tony Bennett and Joe Montana.

Some teams will raise money for charity in the process.

The Oakland Athletics offer a wide range of prices, but fans who pay $149 will have cutouts of their likenesses placed on the first-base side of RingCentral Coliseum and get an autographed photo from outfielder Stephen Piscotty. Proceeds benefit the Piscotty family foundation that’s seeking a cure for ALS, the disease that killed Piscotty’s mother.

If a foul ball happens to hit a cutout, the owner receives a baseball signed by Piscotty.

“I’ve already got a bunch of texts saying, ‘Ooh, I want one!’” said Piscotty, who indicated the promotion was his father’s idea. “Obviously, we’d love to sell that section out. That would be really cool.”

MLB parks generally won’t have as many cutouts in the stands as that German soccer club. How often the cutouts will appear depends on the team.

The Giants and New York Mets are offering cutouts to all their season-ticket holders for no extra charge and expect to use them at all home games. The Giants are also selling cutouts for $99 to fans without season tickets. The Dodgers are charging $149 to $299 depending on where the cutouts will be seated, with all money going to the Los Angeles Dodgers Foundation.

Rather than going with individual cutouts, the Twins are seeking submissions for a mosaic featuring photos of over 3,000 fans to go in the left-field stands at Target Field.

The White Sox are only planning to use their cutouts for the first home series, though they’re considering the promotion for other games as well. They sold out their allotment of 1,500 cutouts for that opening series, with the $49 sales benefiting White Sox Charities.

Michael and Megan Izzo of Oswego, Illinois, wanted to take their 2-year-old daughter, Aria, to her first White Sox game this year. When the pandemic spoiled that plan, the Izzos made sure to get their daughter’s face on a cutout that can eventually become a family keepsake.

They selected a picture with Aria holding a sign bearing this message: “Aria’s first Sox game, well, sort of.”