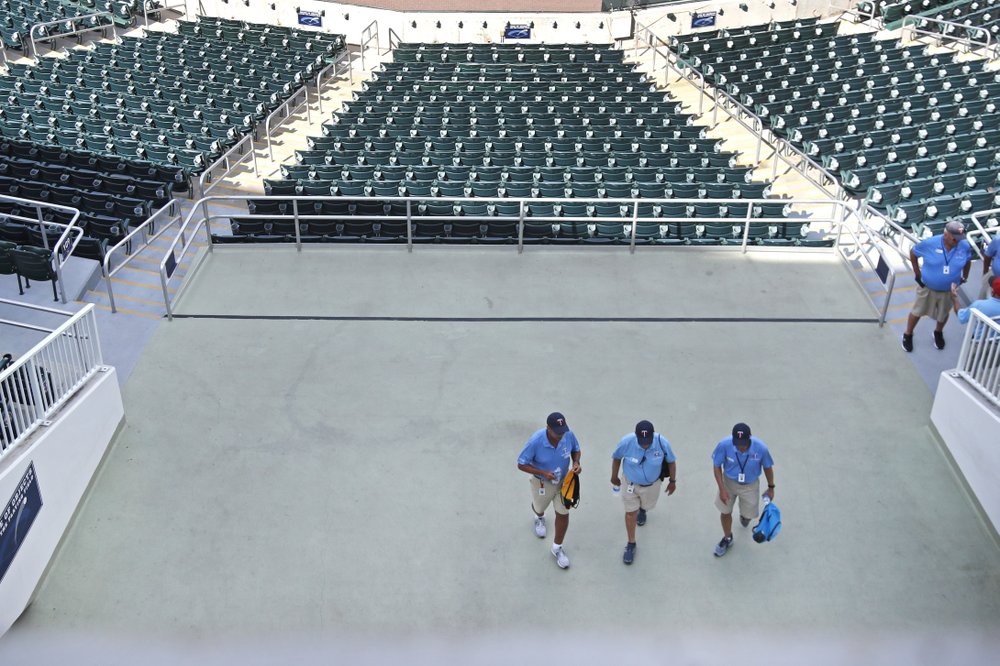 MIAMI (AP) — David Edelman can usually be found at a Denver Nuggets basketball game or a Colorado Rapids soccer game. As an usher, he interacts with fans in a role he calls a staple of his life.

But there are no Nuggets games for at least a month. No Rapids games, either. And Edelman has no idea what he’ll do now.

“This is what I do for a living,” Edelman said earlier this week, as the realization hit that sports were going on hiatus because of the coronavirus. “This is my income.”

Thousands of workers would have staffed the 450 NBA and NHL games that will not be played over the next month in response to the pandemic. And then there are the more than 300 spring training and regular-season baseball games, 130 NCAA Division I men’s and women’s tournament games, 50 or so Major League Soccer matches, all international golf and tennis tournaments, and who-knows-how-many high school, small college and other entertainment events canceled or postponed because of the global health crisis.

The total economic impact of the loss of sports and other events because of the pandemic — assuming only a month shutdown — is impossible to calculate but will reach the billions, easily.

Tickets aren’t being sold, so teams and leagues and organizing bodies lose money. Fans aren’t going to events that aren’t happening, so taxi drivers and ride-share operators have no one to ferry to and from those places. Hotel rooms will be empty. Beers and hot dogs aren’t being sold, so concessionaires and vendors lose money. Wait staff and bartenders aren’t getting tips. Without those tips, their babysitters aren’t getting paid.

“As players, we wanted to do something, along with our ownership and coaches, to help ease the pain during this time,” star guard Stephen Curry said.

Some teams and top players are trying to help. Dallas Mavericks owner Mark Cuban, within minutes of the NBA shutdown announcement, said he wanted to find a way to help workers who will lose money because games won’t be played. By Friday, he had his plan: “We will pay them as if the games happened,” he told The Associated Press in an email.

The Golden State Warriors’ ownership, players and coaches have pledged to donate $1 million to provide assistance to employees who work games at Chase Center.

Other teams, including the Cleveland Cavaliers, have made commitments to workers at not just NBA events but also the building’s minor-league hockey games. The Miami Heat, Toronto Raptors, Washington Wizards and Atlanta Hawks were among the earliest NBA franchises to reveal they’re working on how they’ll take care of arena staffs. So have the NHL’s Washington Capitals, among others, and the ownership group for Detroit’s Pistons, Red Wings and Tigers on Friday said they were setting up a $1 million fund “to cover one month’s wages for our part-time staff for games, concerts and events that they would have otherwise worked.”

“Our teams, our cities and the leagues in which we operate are a family, and we are committed to looking out for one another,” New Jersey Devils owner Josh Harris said.

Cavaliers star Kevin Love pledged $100,000 to help the workers in Cleveland address what he described as their “sudden life shift.” On Friday, reigning NBA MVP Giannis Antetokounmpo of the Milwaukee Bucks made a $100,000 pledge on behalf of his family — and the team said later Friday that fellow Bucks All-Star Khris Middleton also donated $100,000.

“It’s bigger than basketball! And during this tough time I want to help the people that make my life, my family’s lives and my teammates lives easier,” Antetokounmpo wrote on Twitter.

Zion Williamson of the New Orleans Pelicans said he would “cover the salaries” for workers at the team’s arena for the next 30 days. Blake Griffin of the Detroit Pistons pledged $100,000 for workers there, the San Jose Sharks said part-time arena workers would get paid for all games not played and Florida Panthers goalie Sergei Bobrovsky said he was giving $100,000 to workers in that club’s arena — a donation matched by his teammates and followed by another pledge from the team’s ownership group.

“This is a small way for me to express my support and appreciation for these wonderful people who have been so great to me and my teammates and hopefully we can all join together to relieve some of the stress and hardship caused by this national health crisis,” Williamson wrote on Instagram.

At Chicago Blackhawks hockey games alone, about 1,500 workers are in or outside the building on event nights: guest services, concessions, parking, security, box office and so on.

“The per game payroll is more than $250,000,” said Courtney Greve Hack, a spokeswoman for the United Center.

If that’s the NHL norm — no official numbers are available — then workers around the league would stand to lose more than $60 million if hockey does not return this season.

“I get it,” said Chris Lee, who owns a coffee and smoothies franchise in Arizona that draws 70% of its annual revenue sales at spring training and Arizona Coyotes hockey games. “But this is going to be really tough.”

Lee was packing up cups that won’t be used when baseball announced Thursday that spring training was ending about two weeks early. He and his staff — one full-timer, 14 part-time employees — aren’t sure what comes next.

The enormity of the number of people affected stacks up quickly.

The group that owns the Raptors and other pro sports clubs in Toronto, Maple Leaf Sports and Entertainment, says it’s trying to help 4,000 workers in that city. Extrapolate that across other Canadian and U.S. pro sports cities, and those teams could be looking at 100,000 workers feeling some sort of pinch — not counting the impact at college and other levels.

Some events won’t happen, and it is unclear if workers affected by those cancellations will get any help.

The NCAA men’s Division I tournament generates about $900 million annually through television and marketing rights alone. In Albany, New York, which was scheduled to host men’s tournament games for the first time in 17 years, organizers estimated the economic loss from the three-day event to be about $3 million.

Bars and restaurants bought tons of additional stock and perishables to prep for crowds that won’t arrive. It’ll probably take a few years before the NCAA can bring the tournament back to many of the cities slated to host games next week.

“It’s incredibly disheartening. There’s no question about that,” said Mark Bardack, president of public relations and management firm Ed Lewi and Associates, which had worked for more than a year on the planning of the tournament in Albany. “To have it all disappear, though obviously no one’s fault.”

Some arena workers, many not wanting to be identified because of workplace policies about speaking to reporters, said they are living paycheck-to-paycheck. They’re not alone, of course: A study last fall by the American Payroll Association said 74% of workers in the U.S. would “experience financial difficulty” if their usual payday was delayed by as little as one week.

“The more I sell, the more I make,” the 56-year-old said. “The less I sell, the less I make. It would hurt me, financially. I would have no income coming in. … I make pretty good money. But if there’s no fans, there’s no work.”

TOP PHOTO: Ushers leave empty Hammond Stadium, after a baseball game between the Minnesota Twins and the Baltimore Orioles was canceled, Thursday, March 12, 2020, in Fort Myers, Fla. Major League Baseball has suspended the rest of its spring training game schedule because if the coronavirus outbreak. MLB is also delaying the start of its regular season by at least two weeks. (AP Photo/Elise Amendola)

0
0   0
previous BREAKING: After state semifinals, WIAA cancels rest of boys and girls basketball seasons
next March Sadness: No brackets, no knowing what might’ve been
Related Posts