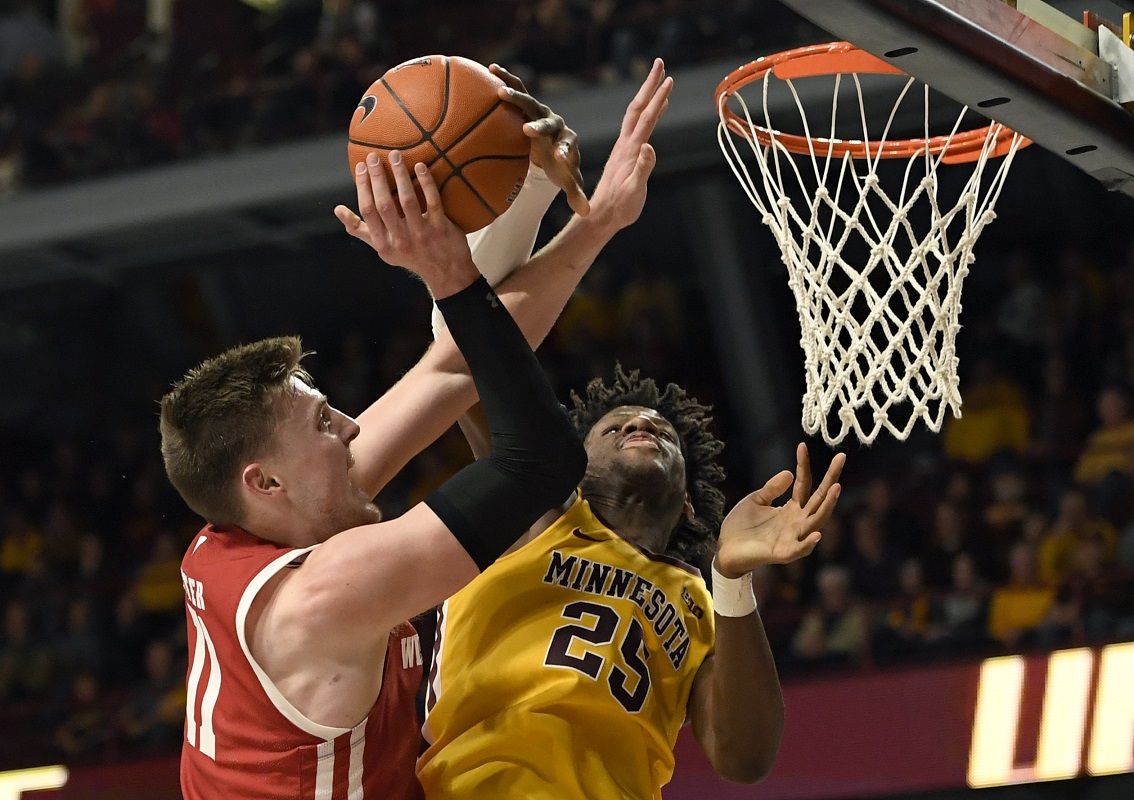 Daniel Oturu had 17 points and 14 rebounds, Marcus Carr scored 12 points, and Gabe Kalscheur added 11 points for the Gophers (12-10, 6-6 Big Ten), who led the entire game and posted their largest margin of victory over the Badgers in 26 years.

Nate Reuvers scored 14 points and Micah Potter had 11 points and 15 rebounds off the bench, but the Badgers (13-10, 6-6) had their worst shooting performance of the season at 28.4% — 19 for 67 — despite the return of guard Brad Davison from a one-game suspension.

The Gophers beat Wisconsin at home for the first time in six years. This was their biggest blowout of the Badgers since a 109-78 decision on Feb. 12, 1994, one of the games later vacated by the NCAA for the academic fraud scandal at Minnesota.

The Gophers cooled off a bit after halftime, but the Badgers went into an even bigger funk. Kalscheur and Oturu hit 3-pointers on Minnesota’s first two possessions of the second half, and Wisconsin never came closer than the original 13-point deficit while too often settling for long-range shots. Reuvers received a delay-of-game warning from the officials for punching the ball after picking up his third foul with 16:27 remaining as the deficit reached the 20-point mark.

The Gophers built a 45-32 advantage at the break, their highest halftime score in Big Ten play this season on the strength of a sharpshooting performance that has been missing for them this winter more often than not.

Willis, who missed the loss at Illinois last week with a shoulder injury, was the primary source of the spark with swishes on his first three 3-point attempts. The transfer from Vanderbilt, who had to sit out last season, had 13 points in the first half to already hit his scoring high in a Big Ten game.

Reuvers did his part with the ball, but most of his production had to come from the outside. Oturu, who was named this week as one of the 20 late-season finalists for the Wooden Award for the national player of the year, was not giving any ground in the lane.

Carr found Oturu for a lob, a layup and a foul on Reuvers with 2:12 left before the break for a 40-25 edge. Kalscheur, who was shooting just 21.6% from long range in conference play entering the game, made two 3-pointers in the final three minutes of the half to get the crowd going.

Davison, one of three Minnesota natives in the starting lineup along with Reuvers and Tyler Wahl, was already well-established as the primary taunting target of the student section for his scrappy style that has left more than one opponent accusing him of nefarious actions.

His suspension for flagrantly fouling Iowa’s Connor McCaffery on Jan. 27 while trying to move through a screen only added more fuel for Gophers fans. Booed each time he touched the ball, Davison was called for a blocking foul at the end of a Minnesota fast break that drew the most animated reaction from a delighted crowd. Davison went 0 for 3 from the floor and had four points.

Wisconsin: Coming off a signature win over Michigan State on Saturday that followed the suspension of Davison and the departure of second-leading scorer Kobe King from the program, the Badgers simply fell flat against their fiercest rival and seemed to lack energy from the start.

Minnesota: By going 9 for 22 from 3-point range, their best outside shooting performance in a Big Ten game this season, the Gophers finally opened up their offense and gave Oturu plenty of space to thrive. They had a 24-8 edge in points in the paint in the first half.

Wisconsin: Plays at home against Ohio State on Sunday. The Badgers beat the Buckeyes 61-57 on the road on Jan. 3.

Minnesota: Plays at No. 22 Penn State on Saturday, having won the first matchup with the Nittany Lions 75-69 at home on Jan. 15. This will be the only Saturday contest on the entire 20-game Big Ten schedule for the Gophers this season.

TOP PHOTO: Wisconsin’s Micah Potter (11) shoots against Minnesota’s Daniel Oturu (25) during the second half of an NCAA college basketball game Wednesday, Feb. 5, 2020, in Minneapolis. Oturu was called for a foul on the play. Minnesota won 70-52. (AP Photo/Hannah Foslien)

0
0   0
previous Buckeyes on top in Big Ten recruiting but Wisconsin, Iowa, Minnesota put together best classes in over a decade
next Badgers assistant resigns after racial epithet allegation
Related Posts