Home NEWS If Vikings are without Thielen, there’s precedent of success 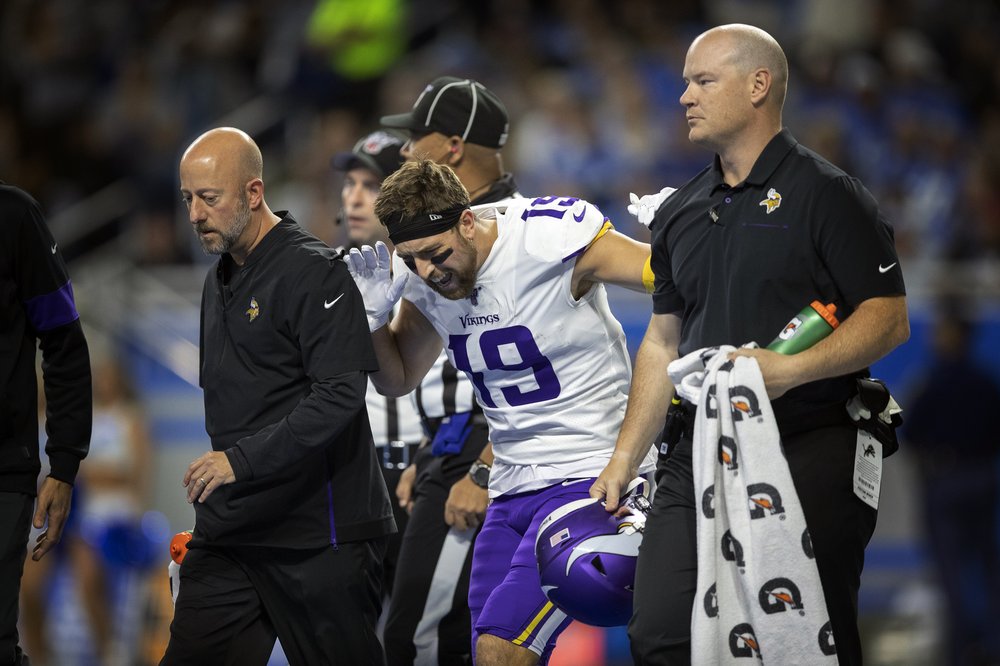 If Vikings are without Thielen, there’s precedent of success

If Vikings are without Thielen, there’s precedent of success

EAGAN, Minn. (AP) — When Adam Thielen left the previous game in Detroit because of a hamstring injury he suffered in the first quarter, the Minnesota Vikings didn’t miss a beat without their two-time Pro Bowl wide receiver.

The passing clinic that Kirk Cousins put on during the 42-30 victory over the Lions could prove to be good practice, because Thielen might not be ready to play on Thursday night when the Vikings host Washington.

Though he has never missed a game in his NFL career, participating in 90 consecutive contests including the playoffs, Thielen will get only three days for the muscle to heal in time. He was held out of practice on Tuesday afternoon.

“I don’t know what the percent chance is, but I feel great. Obviously it’s a short week,” Thielen said, later adding: “I’m just trusting this training staff. I have a lot of confidence in them. I’m doing everything I can, they’re doing everything they can, and I’m hopeful.”

With difficult road games against Kansas City and Dallas looming in November to start the second half of the schedule, giving Thielen a full two weeks to recover could yield a greater reward than from the risk, however small it might be, of putting him on the field against the Redskins. The way this balanced and diversified offense has been playing in October would figure to make that decision easier.

After Thielen was hurt on his touchdown reception, the Vikings crossed the goal line five times in their next seven possessions. One drive ended with a missed field goal after Stefon Diggs had an on-target throw slip through his hands in the end zone.

The play-action passes set up by running back Dalvin Cook’s continued gains in the ground game allowed Cousins to not only go deep to Diggs but find tight ends Kyle Rudolph and Irv Smith Jr. and fullback C.J. Ham underneath the secondary. Then there was the emergence of rookie Olabisi Johnson, the seventh-round draft pick out of Colorado State who has cemented his place as the third wide receiver.

Cousins has surged to the top of the league in passer rating (114.3) and yards per pass attempt (9.1) among quarterbacks with a qualifying amount of throws. There will be many more challenges ahead this season, but three weeks after a particularly rough game at Chicago raised questions about his ability to be more than the quarterback with a roughly .500 winning percentage he’s been for his eight-year career, Cousins has sure quieted the concerns with his most recent performances. He’s the first quarterback in NFL history to post at least 300 yards with a passer rating of 135 or higher in three consecutive games. The offense, at least for now, has established an identity that was lacking down the stretch last season and in that game against the Bears.

“It’s week to week, and you’ve got to go prove it,” Cousins said. “I don’t really feel safe on who we are or what we’re doing until the season is over. Then you look back and say, ‘What was the body of work?’”

Minnesota Vikings wide receiver Adam Thielen (19) reacts after putting weight on his right leg, as he walks off the field with a hamstring injury in the first quarter of an NFL football game against the Detroit Lions, Sunday, Oct. 20, 2019, in Detroit. (Jerry Holt/Star Tribune via AP)