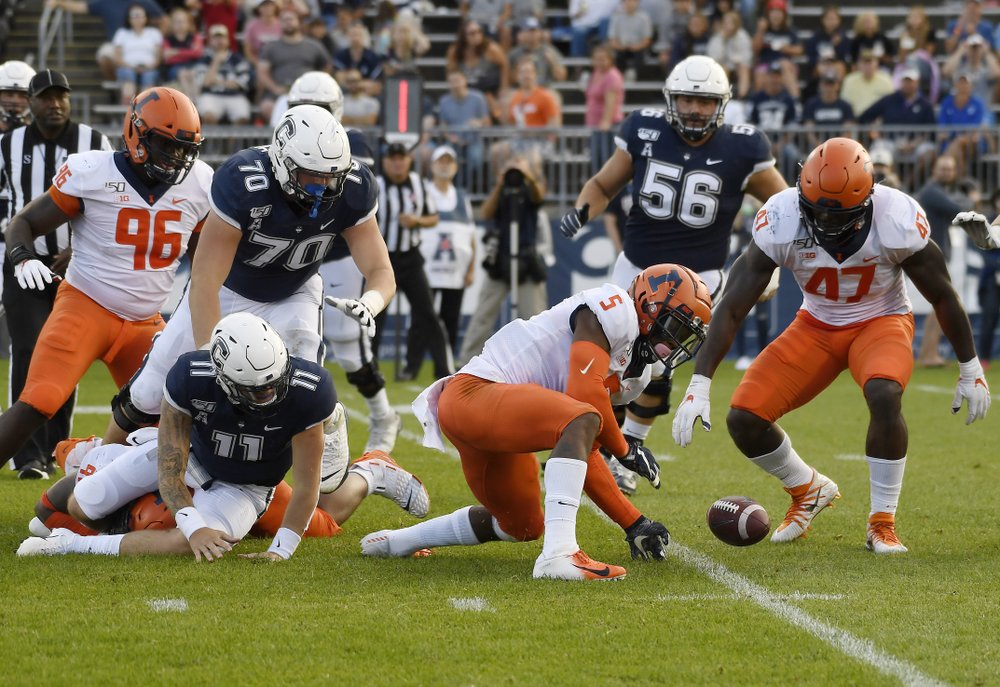 The pool of elite Big Ten defensive linemen looks to be getting deeper.

The play up front traditionally is strong across the conference, and a sampling of 2020 NFL mock drafts shows as many as four Big Ten defensive linemen listed as first-round picks.

Now comes Illinois defensive end Oluwole Betiku Jr., who has burst onto the scene the first two weeks of the season with a nation-leading five sacks and 6.5 tackles for loss. Betiku had been mostly dormant the last three years. He played limited snaps at Southern California in 2016 and ’17 and missed last season because of a hip injury.

Looking for a fresh start, he joined two of his USC teammates as graduate transfers at Illinois. He has two years of eligibility.

“He’s playing great football,” Illini coach Lovie Smith said. “That’s how he’s been since he’s gotten on campus. He’s a good rusher, he plays the run hard, he does everything well. So it’s not surprising.”

Smith added, “For him, this is a heck of a start, and he hadn’t played a lot of ball. It’s been a long time. So he can take another step. I really believe that.”

Betiku came to the United States from Nigeria at age 16 and didn’t start playing football until he was 17. He blossomed quickly. He was a five-star prospect and the nation’s No. 1-rated weakside defensive end by 247Sports when he was a senior at Junipero Serra High in Gardena, California.

As good as he was in high school, he ran into a logjam at USC and backed up future NFL players Porter Gustin in 2016 and Uchenna Nwosu in 2017.

“My first two years I could have played but I didn’t get any meaningful snaps,” he said. “It doesn’t mean much when you go in for one snap when they are taking a knee. I never got into a groove.”

Given the chance, Betiku said, he could have been doing then what he is doing now.

“If you talk to my (USC) teammates who I was with every day, they’ll tell you I practiced and was doing my thing,” he said. “What’s done in the dark is going to be shown in the light one day, and it’s just showing in the light.”

Betiku’s first two games at Illinois (2-0) were against Akron and UConn, so it remains to be seen if he can put up big numbers against tougher opponents in the Big Ten.

“The competition is between me and myself, not between me and Akron, me and UConn, me and Wisconsin, me and Iowa,” he said. “When I step on the field, I’m in competition with myself trying to win and prove to myself the kind of player I am. I don’t see the names or the colors. I try to play so I am the best me I can be for me and my family and my team.”

Young, a preseason Associated Press first-team All-American and a candidate to be the first player taken in the 2020 draft, has three sacks, a pass breakup and a blocked field goal in his first two games.

“I feel like I am unblockable,” Young told reporters this week. “I’m going to try to keep displaying that every week.”

Epenesa, also a preseason first-team All-American, had a sack and four quarterback hurries against Rutgers last week after being relatively quiet in the opener against Miami (Ohio).

Willekes, a preseason second-team All-American, is tied with Gross-Matos for third in the nation with 3.5 sacks. Willekes is tied for third in TFLs with 4.5.

Other defensive linemen to watch: Minnesota’s Carter Coughlin, limited because of injury the first two weeks, picked up a sack against Fresno State last week. Nebraska’s Khalil Davis played a strong game in a loss to Colorado and has eight tackles, three TFLs and a sack this season. Purdue freshman George Karlaftis has eight tackles, 1.5 TFLs and a pass breakup.

The Big Ten has had at least one defensive lineman drafted in the first round six years since 2010. Last year, the conference had two first-rounders — Ohio State’s Nick Bosa (No. 2 overall) and Michigan’s Rashan Gary (No. 12).