Home NEWS Another first for Clemson: No. 1 in AP preseason Top 25 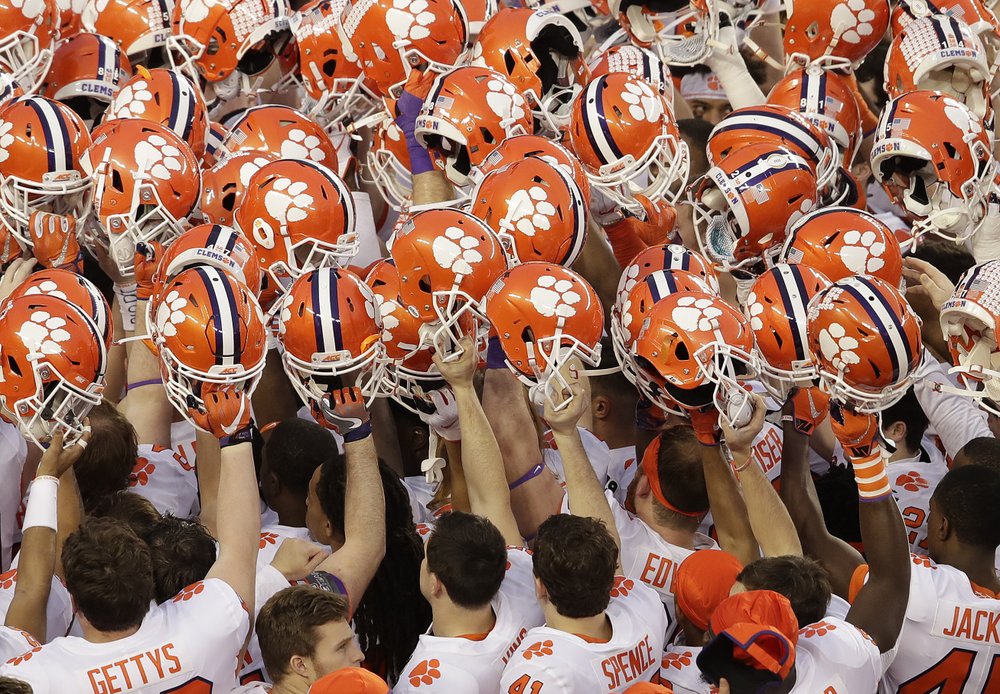 Another first for Clemson: No. 1 in AP preseason Top 25

Another first for Clemson: No. 1 in AP preseason Top 25

Cross off another milestone for Clemson, college football’s newest superpower.

For the first time, the defending national champion Tigers are No. 1 in The Associated Press preseason Top 25 presented by Regions Bank.

The Tigers won the program’s second national title in three seasons behind freshman quarterback Trevor Lawrence in January. Clemson now can claim equal standing with Alabama at the top of the sport.

The Crimson Tide, coming off a 44-16 loss to Clemson in the College Football Playoff championship, is No. 2. Clemson received 52 first-place votes and Alabama received the other 10 from the media. Clemson snaps a record-tying string of three straight years in which Alabama was preseason No. 1.

Georgia, Alabama’s Southeastern Conference rival, is No. 3, followed by No. 4 Oklahoma and No. 5 Ohio State. Wisconsin is ranked 19th. Here are the full rankings.

Clemson’s rise under coach Dabo Swinney has been uncommon in college football. The school won the national championship in 1981, but mostly it had resided on a tier well below the traditional national powers. Clemson football was usually good and sometimes excellent, but never this.

Last season’s championship made Clemson just the 12th school with at least three AP titles since the poll started in 1936.

The Tigers enter 2019 with a 15-game winning streak and eight straight double-digit victory seasons. Since 2015, when they lost the national championship game to Alabama, the Tigers are 55-4.

Nick Saban’s Alabama dynasty, with five national titles in a 10-year span, has finally met its match. The Tide is also 55-4 in the last four seasons.

Last year’s Clemson team was highlighted by a defensive line that had three starters selected in the first round of the NFL draft, and a fourth taken in round four.

The Tigers have some rebuilding to do on that side of the ball, but recent history suggests reinforcements are ready. This year Lawrence and the offense will be the headliner. The first freshman quarterback in more than three decades to lead a team to a national championship, Lawrence will be joined by star receivers Tee Higgins (12 touchdowns) and Justyn Ross (nine touchdowns) and game-breaking running back Travis Etienne (8.1 yards per carry).

Alabama returns quarterback Tua Tagovailoa, the Heisman Trophy runner-up, and an array of weapons, too. As a new season starts, college football fans best be prepared for Tide vs. Tigers V.

The Top 25 is sponsored by Regions Bank this season, the first time the poll has ever had a presenting sponsor.

Clemson is the 23rd team to be preseason No. 1 and the first first-timer since Georgia in 2008. The Tigers will try to become the 12th team to start No. 1 and finish No. 1 since the preseason poll started in 1950. The last to do it was Alabama in 2017. Only two teams have gone wire-to-wire as No. 1: Florida State in 1999 and Southern California in 2004. Alabama has now been No. 2 to start the season nine times, matching Oklahoma for the most in AP poll history. Just as many teams (11) have started No. 2 and won the title as No. 1.

— In 1975, Missouri faced Oklahoma, Alabama and Michigan and went 1-2, beating No. 2 Alabama to open the season.

— No. 14 Utah has been a regular in the rankings for most of the last five seasons, but the Utes have not been ranked in the preseason since 2011 when they started No. 19. That was the season after coach Kyle Whittingham’s team went unbeaten. In 2014, ’15, and ’16, the Utes finished the season ranked after starting unranked.

The first week of the season with a full schedule of games is lacking marquee matchups.