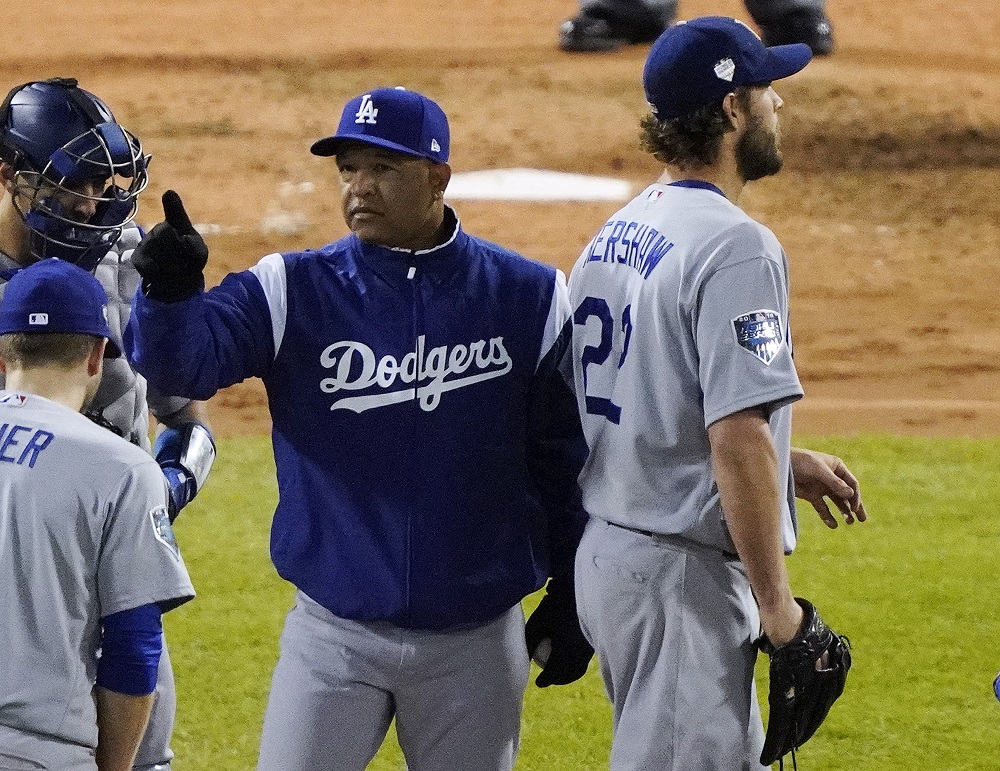 Sometimes, in the pressure cooker of a World Series, a manager gets distracted by all those indecipherable charts and the trove of analytics he has at his disposable.

Sometimes, he spends too much time flailing around in search of the perfect matchup instead of just watching what’s happening right before his eyes.

That’s what happened to Dave Roberts of the Los Angeles Dodgers.

In a classic case of over-managing, Roberts helped send his team to an 8-4 loss in Game 1 Tuesday night against the Boston Red Sox by making one move too many in the decisive seventh inning.

The Dodgers were trailing only 5-4, despite another postseason flop by Clayton Kershaw, when Andrew Benintendi led off with his fourth hit of the game — a bloop down the left-field line that somehow managed to elude Joc Pederson before hopping into the stands for a rather fluky ground-rule double.

Baez was left off the Dodgers’ postseason roster a year ago, when Los Angeles made it all the way to Game 7 of the World Series before losing to Houston, but he’s been a highly valued member of the relief corps in 2018. He worked 55 games during the regular season, going 4-3 with a 2.88 ERA. He worked a total of 6 2/3 scoreless innings during two playoff rounds, allowing just two hits while striking out 10.

Baez kept up his dominance against the Red Sox, striking out Mitch Moreland with three fastballs clocked at 96, 97 and 96 mph — the last one up in the eyes that Moreland flailed at helplessly. J.D. Martinez was wisely walked intentionally, setting up a double play, but Baez looked like he wouldn’t need any help from the defense as he kept unleashing a torrent of wicket fastballs.

Xander Bogaerts stared at one, missed another, fouled one off to merely delay the inevitable, then struck out swinging on yet another 96-mph fastball.

At that point, Roberts merely had to let Baez finish the job.

Instead, the Dodgers skipper popped out of the dugout again, signaling to the bullpen for left-hander Alex Wood. With left-handed hitter Rafael Devers coming up, Roberts let the matchup game get the best of him.

Boston manager Alex Cora countered with a move of his own, sending up well-traveled Eduardo Nunez as a pinch-hitter.

Roberts defended his hook of Baez.

“We talked about it with Petey throwing the ball well there,” the manager said. “But Devers is really good against the right-hander. With Nunez, I really liked Alex in that spot.”

Wood delivered an 83-mph breaking ball that Nunez took for a ball. Wood came back with roughly the same pitch, just a bit closer to the strike zone. Nunez was ready for it, launching a drive over the Green Monster for a three-run homer that essentially locked up the victory.

All Baez could do was watch from the dugout.

He should’ve still been on the mound.

Paul Newberry is a sports columnist for The Associated Press. Write to him at pnewberry@ap.org or at www.twitter.com/pnewberry1963