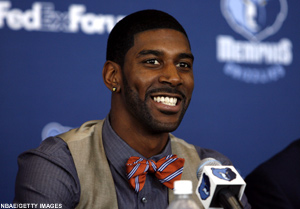 Before that, Mayo was inconsistent for the Memphis Grizzlies – shooting 40 percent from the field  and 36 percent from deep – but he was also young and inexperienced. He seemed to have found his game with the Mavs. Or he was playing for a contract. I’m leaning toward the “finding his game.”

Everyone was up in arms about the Bucks trade Tuesday. Perhaps this signing stops those qualms from those four fans.

I think the signing is great … except that we don’t know how much he’s signed for yet. And I agree with the trading of Reddick, too … the trade Tuesday, not the trade last season to get him.

The Bucks traded Reddick to the Clippers basically for two second-round draft picks.

It makes everyone cringe because it looks like Milwaukee gave up Reddick for virtually nothing.

Overlooking the horrible deal that brought Reddick to the team, this transaction actually wasn’t so bad.

Why? Because Reddick was an unrestricted free agent. He was leaving anyway. The Bucks did a sign-and-trade deal with the Clippers (the Suns were also involved).

So, instead of just waving goodbye to Reddick via free agency, the Bucks got something for him. It’s not great, but it’s better than nothing.

And, if you want to be a glass-half-full kind of person, the two second-round draft picks could be gold if the Bucks land the right player. Someone like Houston Rockets forward Chandler Parsons. The 24-year-old signed a $3.6 million, four-year contract in 2011.

Last year, his second season, he averaged 15.5 points, 5.3 rebounds and 3.5 assists. He makes less that a million a year. It’s almost unfair to have that production from a million dollars.

Then again, the Bucks traded a similar player to get Reddick in Tobias Harris.

For Milwaukee, the 20-year-old Harris averaged 4.9 points, 2 rebounds and barely a steal and block in 11.6 minutes per game – starting 14 of the 28 games played – in his sophomore season. I’m not sure how you start 14 games and still only average 11.6 minutes, but that’s the Bucks for you.

For Orlando, Harris, averaged 17.3 points, 8.5 rebounds, 1.4 blocks and .9 steals a game. Those are LeBron James’ numbers without the assists. I’m not kidding.

Harris, a first-round pick, is set to make $7.6 million over the next three seasons, which is basically nothing.

So, if the Bucks can draft someone who can contribute and they decide not to trade him away for a rental like Reddick, it could be the beginning of a rebuild, instead of this one-and-done in the playoffs.

Sports Illustrated did give the Bucks a D for the trade, but I’m not sure what else they could have gotten in return.

Perhaps the grade was based on the Bucks using Reddick sparingly off the bench, which didn’t make him happy. They should have done what I said, and brought in Ellis as the sixth man  to mop up against other team’s second units – and therefore letting him chuck with a bunch of rebounders around him, because he is going to chuck anyway … when Brandon Jennings wasn’t chucking.

Next up … restricted free agent Brandon Jennings, who the Bucks have already said they are matching any offer a team sends. Hopefully they’re kidding.