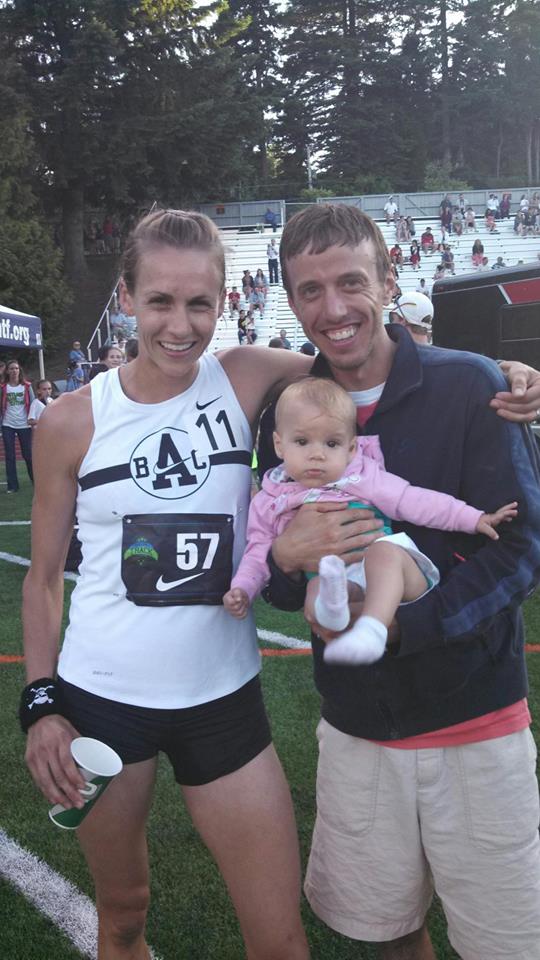 DES MOINES, Iowa – You may remember this name: Julia Rudd.

She was the 2004 Division III National Champion in the Steeplechase for UW-La Crosse. She’s an 11 time All-American and is the UW-L record holder in the 3,000- and 5,000-meter steeplechase races.

Oh, she was also a 2006 Woman of the Year candidate as a senior for the Eagles and was named to the all-time WIAC cross country team.

Well, she’s still running. She took part in the 3,000 steeple at the USA Track and Field National Championships on Thursday at Drake University and has qualified for finals. She will run the finals at 4:20 p.m. Saturday.

The USATF National Championships serve as the selection event for the coveted spots to represent Team USA at the IAAF World Championships August 10-18 in Moscow, Russia.

Rudd, now running as Julia Webb (pictured with husband Alan and daughter Joanie) since her marriage a few years ago, grabbed the final spot in Saturday’s finals, finishing in 10 minutes, 11.42 seconds in the second heat – which was the slow heat.

Qualifying for Team USA will be a challenge. The top eight runners finished under 10 minutes led by Nicole Bush’s 9:54.41. But Webb does have that in her. Her PR is 9:55.36. She’s realistic though.

When asked what she’d need to qualify for Team USA – as in officially – she replied in much more realistic terms: “Another body and genetics,” she said. “My goal is Top 8.”

We should also consider this: A year ago (and one day, to be exact), Webb was 30 pounds heavier.

No, she wasn’t pigging out before that and let herself go, but she did go through a miracle weight-loss program … called birth.

Running with a stroller is apparently a great training technique.