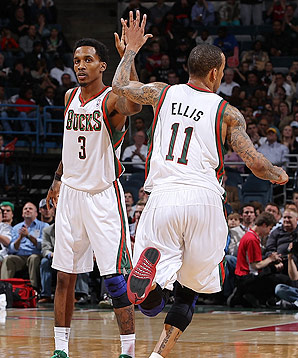 It appears to be a sad day in Milwaukee.

Appearances can be deceiving.

The sadness doesn’t come from Ellis opting out of his deal or declining the Milwaukee’s offer. That, actually, should cause Bucks fans to rejoice and riot in the streets like they just won something.

Two things show true of Milwaukee’s competence (actually, a lack thereof) from the dealings with Ellis.

First, his declining the offer makes Milwaukee look like an abysmal place to live while playing basketball.

If a player as selfish as Ellis will take less money from another team rather than stay in Milwaukee … yikes.

The 27-year-old Ellis should be lucky to get $12 million a year somewhere else, though, sadly, some team as apparently inept in all things basketball as the Bucks will pay him.

Second, whoever is running the Milwaukee Bucks has no clue.

There’s only one reason why someone who knows anything about basketball and salary caps would offer Ellis a three-year, $36-million offer.

And that’s if Ellis, his agent, and the Milwaukee front office went into a closed-door meeting and Ellis said, “I don’t want to resign with you guys, but if you shoot me a $12-million-a-year offer, I’ll decline it, and can head to other teams, demanding a similar figure. That would screw another team’s salary cap, and I’ll get paid.

“Not to mention I’m a horribly selfish, inefficient player that hasn’t really won anywhere. Just look at my old team, Golden State. They traded me for virtually nobody (a center named Andrew Bogut who missed 90 percent of the regular season, then came back to grab a few rebounds and shoot three times a game) and went from not making the playoffs five years in a row with Ellis to nearly making the Western Conference Finals – giving what looks like the NBA champion San Antonio Spurs a harder time than the Miami Heat along the way.”

OK, Ellis would probably only say part of that statement in that meeting. The rest would be him being horribly truthful.

In his sophomore season in the NBA, a 42-40 Ellis-led Golden State team went to the Western Conference semifinals and Ellis was the most improved player in the league.

The Warriors didn’t make the playoffs again and went a combined 198-250 with him on the team over the next five seasons, before he was traded to Milwaukee on March 13, 2012.

What’s scarier than him getting a three-year, $36-million offer from Milwaukee is what that means for 23-year-old “point” guard Brandon Jennings.

He’s probably ordering canvas bags with the dollar sign printed on them or building a money bin similar to Uncle Scrooge’s (DuckTales people), because he’s about to get paid and that’s not good if it’s Milwaukee paying him.

Whatever Ellis is in terms of a basketball player, Jennings is worse … or better, depending on whether you’re a glass half full or empty type.

In other words, Jennings isn’t a leader, isn’t a game-changer. He isn’t a franchise player, isn’t going to carry a team and can’t be paid like it.

Nobody else gets involved – not even Ellis – and the game of basketball takes a large step back.

The worst-case scenario for Milwaukee is someone offers him max money and the Bucks match the offer.

The best-case scenario for Milwaukee is a sign and trade for Jennings. Even if that’s simply for a second-round pick.

It sticks someone else with a dribble-first, shoot-next guard for way too much money, while the Bucks can FINALLY bottom out and get into the draft lottery.

Yes, that’s the best case scenario for the Bucks: Losing badly multiple seasons in a row and stockpiling draft picks. Or landing LeBron James. But I’m trying to be realistic.

Milwaukee has been fairly capable in the draft of late – brilliant, in fact – despite being one and done in the playoffs two of the last four years and not qualifying for the draft lottery. They just need to keep those players (e.g. Tobias Harris).

0
0   0
previous Westby title did in by one mistake
next Miami to cover Green ... now
Related Posts