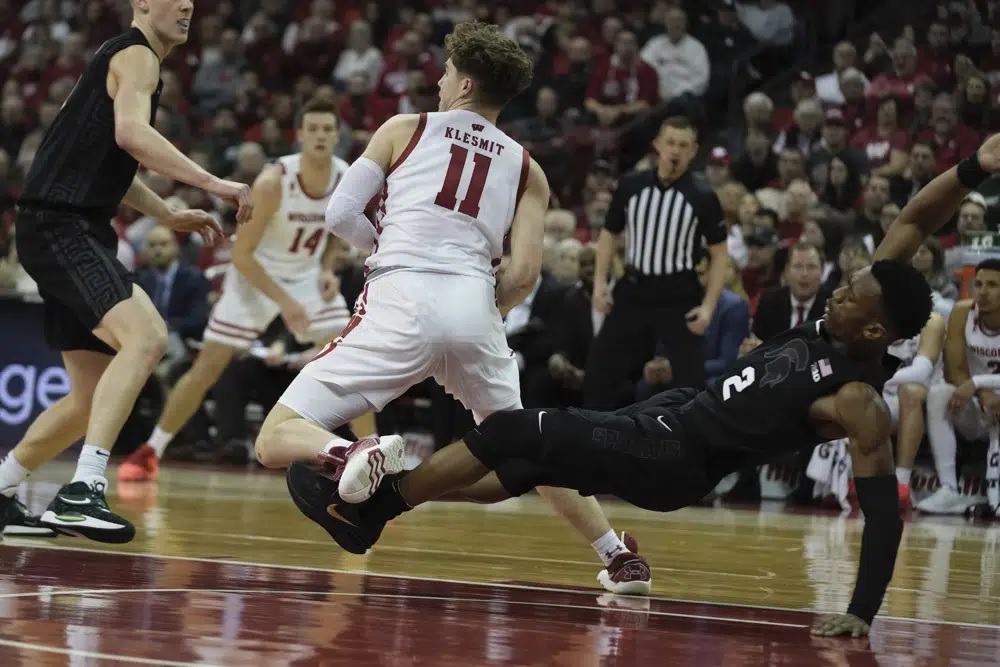 La Crosse’s Davis scoreless in 22 minutes, as No. 18 Badgers lose to Michigan State

La Crosse’s Davis scoreless in 22 minutes, as No. 18 Badgers lose to Michigan State

La Crosse native Jordan Davis was scoreless Tuesday for the 18th-ranked University of Wisconsin men’s basketball team, which lost 69-65 to Michigan State at the Kohl Center.

Davis, who has started every game this season, played 22 minutes and was 0-for-2 from the field. The 6-foot-4 guard had three rebounds and a steal.

It’s the second game this season Davis has gone scoreless. He also didn’t score in Wisconsin’s 69-68 overtime loss to No. 3 Kansas, when he played 18 minutes and went 0-for-5.

The decisive play for Wisconsin came right after Michigan State took the lead. Chuck Hepburn dribbled down and heaved a 3-pointer that just grazed the rim.

The Badgers were, again, playing without leading scorer Tyler Wahl, who sat out Saturday’s loss to Illinois, as well. UW coach Greg Gard had no update on when Wahl might return.

Neither team led by more than six points.

Steven Crowl had 19 points, Hepburn added 14 and Connor Essegian scored 13 for Wisconsin, which is 18-6 over the last two seasons in games decided by five points or less.

Michigan State: The Spartans had been winning games with defense., with opponents shooting just 36.4% overall and 23.4% from 3-point range during their last six victories. But they won this one with great shots and offensive execution down the stretch.

Wisconsin: The Badgers proved they could compete with quality teams even without Wahl, who also missed the Badgers’ 79-69 loss at Illinois on Saturday. But a 33-18 rebounding deficit was too much to overcome.

Michigan State center Mady Sissoko went to the locker room late in the first half after taking a hit to the face. He received five stitches above his right eye before returning to play the second half. He ended up with six points and 11 rebounds.

Michigan State should enter the AP Top 25 if it wins Friday. Wisconsin probably needs to win Saturday to stay in the poll.

Michigan State: At Illinois on Friday.

Wisconsin: At Indiana on Saturday.

TOP PHOTO: Wisconsin’s Max Klesmit is called for a charge on Michigan State’s Tyson Walker during the second half of an NCAA college basketball game Tuesday, Jan. 10, 2023, in Madison, Wis. (AP Photo/Morry Gash)