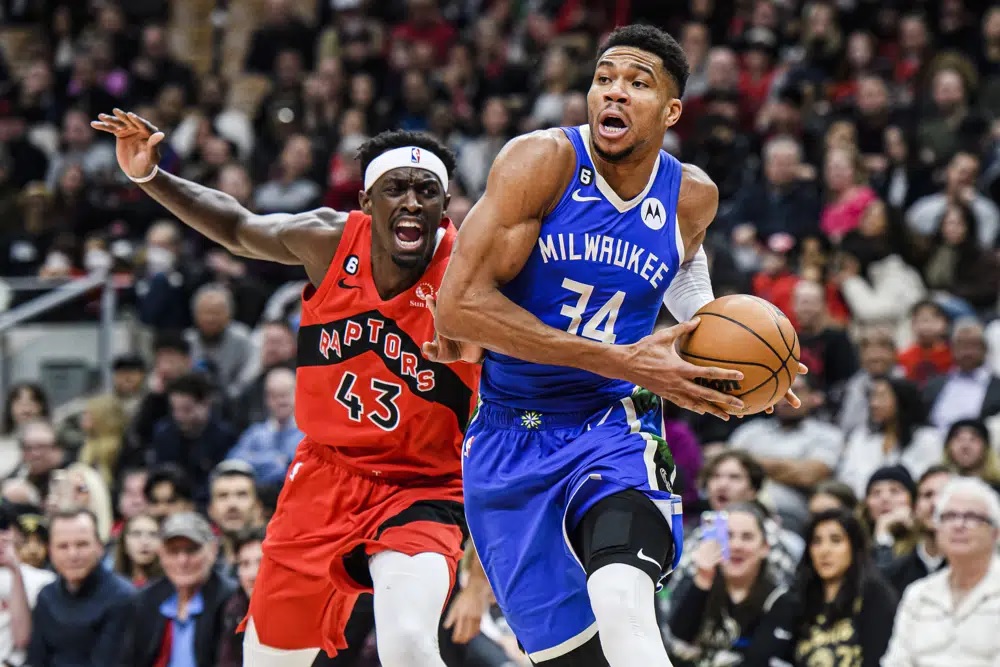 Bucks blow 21-point lead in final 3:50, need Antetokounmpo to save them in OT

Bucks blow 21-point lead in final 3:50, need Antetokounmpo to save them in OT

TORONTO (AP) — Giannis Antetokounmpo had 30 points, 10 assists and a season-high 21 rebounds for his second triple-double of the season, Grayson Allen hit a tiebreaking 3-pointer with 11.6 seconds to go in overtime and the Milwaukee Bucks beat the Toronto Raptors 104-101 on Wednesday night.

Antetokounmpo, who scored a career-high 55 points Tuesday night against Washington, came in having posted at least 40 points, 10 rebounds and five assists in each of his past three games. The two-time MVP shot 7 for 18 against Toronto, making 1 of 3 from 3-point range and 15 of 21 at the free throw line.

“On a back-to-back, he used a lot of energy both last night and tonight,” Bucks coach Mike Budenholzer said. “They (Toronto) are very physical. For him to find a way to get us over the top was huge.”

“Obviously your body is tired,” Antetokounmpo said. “It’s more mental than physical, just being about to go out there and get the job done on a back-to-back always feels good.”

The Bucks led 90-69 with 3:50 left in the fourth quarter, but Toronto cut it to 97-94 with 25 seconds to go before Milwaukee’s 26th turnover gave the Raptors the ball back, allowing Gary Trent Jr. to hit a tying 3 with 0.8 seconds left. Antetokounmpo couldn’t convert an alley-oop at the buzzer.

Milwaukee improved to 4-0 in second games of a back-to-backs.

“That was an experience, but a loss is a loss,” Toronto’s Fred VanVleet said of the back-and-forth game.

Antetokounmpo, falling out of bounds after driving down the middle of the lane, somehow found Allen in the corner for the clinching 3-pointer late in OT.

“It felt like it was a dart to Grayson,” Budenholzer said. “It hit him right in the shooting pocket. Big-time play, big-time pass.”

“He was driving and falling down with three people on him,” Allen said. “It was a pretty amazing pass to make that accurately. It made it an easy shot for me.”

VanVleet missed a 3 at the other end and Antetokounmpo grabbed his 21st rebound.

Allen scored 16 points, Bobby Portis Jr. had 14 points and 12 rebounds and Pat Connaughton scored 15 points for the Bucks. Milwaukee won for the third time in four games since losing a season-high four straight.

VanVleet had 28 points and 12 assists, Trent scored 22 points and Scottie Barnes had 17 but the struggling Raptors lost for the sixth time in seven home games. Toronto has lost 10 of 13 overall.

Toronto missed its first 15 shots before VanVleet made a driving layup with 4:36 left in the first quarter. Earlier, a few fans booed after VanVleet missed a 3, Toronto’s 13th consecutive miss to open the game.

The Raptors shot 2 for 23 in the first and Milwaukee went 5 for 24 as the teams combined for more turnovers (10) than made baskets. The Bucks led 13-12 after one. According to ESPN, it was the lowest-scoring quarter in the NBA this season.

Bucks: Antetokounmpo had 18 rebounds in a Dec. 11 loss at Houston. … Brook Lopez had 19 rebounds. … G Jrue Holiday (non-COVID illness) and F Joe Ingles (left knee) were out after playing Tuesday at Washington. G George Hill (non-COVID illness) sat for the fourth straight game. … F Khris Middleton (right knee) missed his 10th straight game. … Antetokounmpo had five turnovers in the first half. He finished with 12 of Milwaukee’s 28.

Raptors: All of Barnes’ points came in the fourth quarter and overtime. … Took a season-high 116 field goal attempts. … Scored seven bench points for the second consecutive game, both losses.

The Raptors began the game with 13 missed 3-pointers before VanVleet connected in the second quarter. Toronto finished 9 for 46 from distance, its worst shooting percentage from 3-point range this season