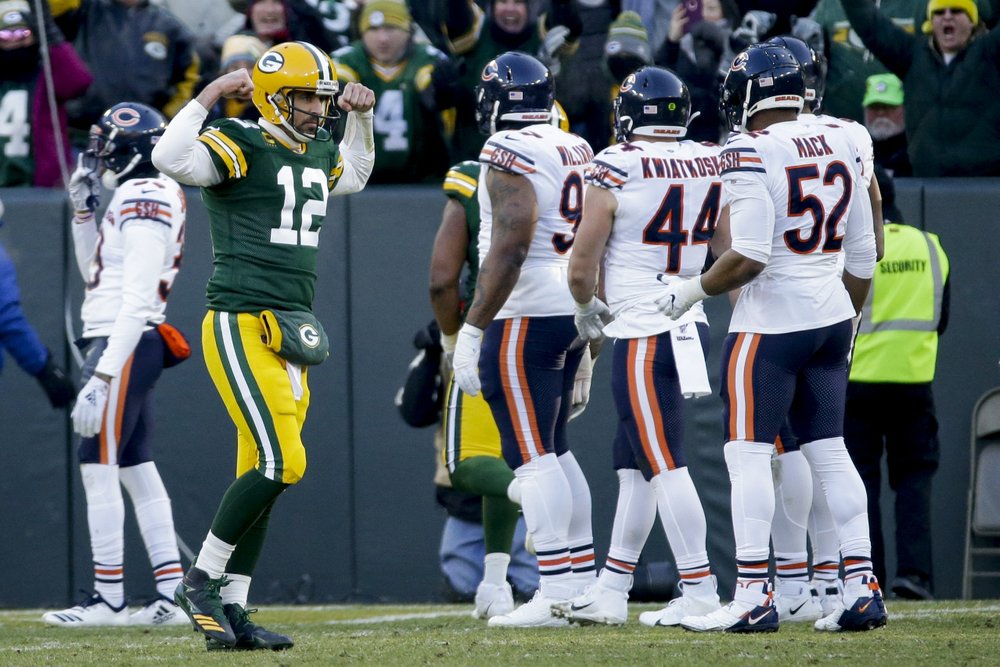 GREEN BAY, Wis. (AP) — Green Bay Packers quarterback Aaron Rodgers says he expects to play Sunday at Chicago after a rib injury knocked him out of a 40-33 loss at Philadelphia.

“I got good news with the scans yesterday, so I plan on playing this week,” Rodgers said Tuesday on “The Pat McAfee Show” on YouTube and SiriusXM.

Rodgers left in the second half against the Eagles because of the rib injury. He already has been playing with a broken right thumb, an injury he sustained on the final play of a 27-22 loss to the New York Giants on Oct. 9.

“There was an earlier shot in the game that kind of rattled the ribcage,” Rodgers said. “I was trying to stretch some things out at halftime a little bit and realized it probably wasn’t some sort of muscle injury. And I just got hit again in the third quarter and was just having a hard time breathing.”

Packers coach Matt LaFleur had said Monday that Rodgers was feeling better, but added the team would know more about the four-time MVP’s status in the next couple of days.

Rodgers said he wouldn’t be surprised if the injury limited his practice time.

“I might miss practice Wednesday and not be a full contributor, but that’s kind of been standard for the last, I don’t know, six or seven weeks,” Rodgers said. “(We’ll) go to one of my favorite places to play down in Chicago and hopefully get a big win, get into the bye week, get healthy and see where we can get to.”

The Packers (4-8) still have a slim chance of reaching the playoffs heading into their game with the Bears (3-9). Rodgers said after the Eagles game that he wanted to keep playing through these injuries as long as the Packers still have a chance of making the postseason.

Rodgers also offered praise Tuesday for Jordan Love, the 2020 first-round pick who took over for him in the Eagles game and went 6 of 9 for 113 yards with a touchdown.

“It was really nice to watch,” Rodgers said. “I feel like an older brother watching him do well. I care about the kid a lot.”

NOTES: The Packers signed safety Innis Gaines to the active roster from the practice squad, released safety Johnathan Abram and signed tight end Nick Guggemos to the practice squad. The Packers had added Abram earlier this month when they claimed him off waivers from the Las Vegas Raiders, who had taken him with the 27th overall pick in the 2019 draft.