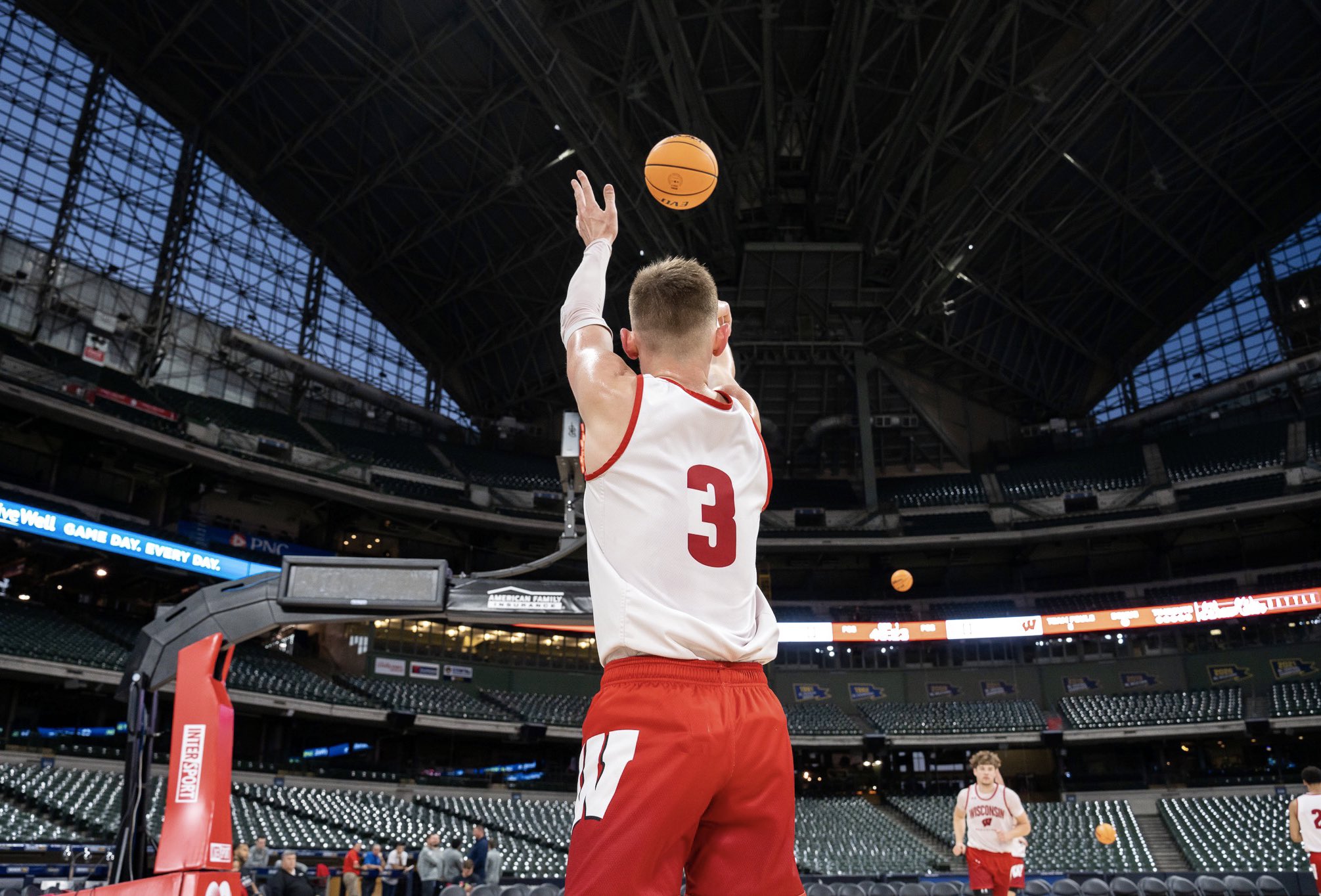 MILWAUKEE (AP) — Two of the more notable games on Friday’s college basketball schedule are taking place on an aircraft carrier and in a baseball stadium.

At 6:30 p.m. Friday, the University of Wisconsin men’s basketball team is playing Stanford at American Family Field, the retractable-roof park that is home to the Milwaukee Brewers.

No. 2 Gonzaga will face Michigan State on the flight deck of the USS Abraham Lincoln in the San Diego harbor to celebrate Veterans Day.

“We’ve been ‘Outside the Box U’ for 20 years and other people are catching up,” Izzo said. “That’s good, and that’s why I didn’t want to pass up this game.”

Izzo’s penchant for this began in 2003, when Michigan State lost to Kentucky in front of 78,129 fans at Ford Field, the home of the NFL’s Detroit Lions. Soon enough, plenty of late-round NCAA Tournament games started taking place in football stadiums.

This won’t be the first time Izzo has coached a game on an aircraft carrier.

Michigan State lost to top-ranked North Carolina in November 2011 on the flight deck of the USS Carl Vinson as President Barack Obama and first lady Michelle Obama watched from courtside.

Stanford coach Jerod Haase was a North Carolina assistant coach for that 2011 game. Now, he’s preparing his team to play the first basketball game at a baseball-only stadium since San Diego faced San Diego State in 2015 at Petco Park, home of the Padres.

“It’s an experience for our guys to talk about when they’re old like me, about how they played in a baseball stadium,” Haase said.

The offbeat settings come with potential obstacles, particularly when they’re outdoors. The roof will be closed for the American Family Field doubleheader that includes a women’s game between Wisconsin and Kansas State.

The 2011 North Carolina-Michigan State game on a carrier finished less than an hour before rain fell.

A year later, condensation on the respective courts wiped out an Ohio State-Marquette game aboard the decommissioned USS Yorktown in Charleston, South Carolina, and a Georgetown-Florida game aboard the USS Bataan in Gainesville, Florida. Florida and Georgetown did play the first half before the game was scrapped.

During that 2012-13 season, a Syracuse-San Diego State game aboard the flight deck of the USS Midway Museum was delayed two days due to rain. And, windy conditions affected 3-point shooting when it was played.

The teams involved believe the opportunity is worth the potential drawbacks.

Gonzaga coach Mark Few jumped at the chance when the idea of playing on a carrier was proposed.

Wisconsin coach Greg Gard says his hopes of having the Badgers play a game at American Family Field started about 15 years ago, when he was an assistant coach and the stadium was known as Miller Park.

Various plans were discussed over the years.

“We were going to do a doubleheader basketball-hockey and set up ice in the outfield,” Gard said. “Everything was on the table at one point in time.”

Gard is about to realize that dream — minus an ice rink.

Wisconsin and Stanford practiced Thursday on a court that encompasses much of the ballpark’s infield, with baskets in the vicinity of first base and third base.

The pitcher’s mound was removed, and fans will sit in temporary stands courtside, as well as in some of the stadium’s permanent seats.

“Listening to our players as we walked up out of the dugout, what their reactions were, I think it turned out really, really good,” Gard said.

Wisconsin forward Tyler Wahl, who has attended just one Brewers home game, tried to envision just what to expect on Friday.

“I’m excited to see what it looks like with basketball, bringing a whole different crew of fans,” Wahl said. “Hopefully it will be cool.”

Brewers president of business operations Rick Schlesinger said he was hopeful that the contest was the first of many chances to host hoop games at the ballpark.

Gard says he’d love to see an NCAA regional at American Family Field, though it could be tough to host that kind of event in late March while still having the ballpark’s grass surface ready in time for baseball season.

For now, Wisconsin and Stanford are looking forward to a unique experience in an atypical early-season game. Michigan State and Gonzaga feel the same.

“I’m a little bit old school and I believe the college education is much more than just what you learn on the classroom and the games themselves,” Haase said. “It’s all the experiences around them. I think this provides that.”

0
0   0
previous No. 3-ranked Aquinas a win away from defending state championship
next West Salem blows out Onalaska, headed to state championship for 1st time since 2007; Aquinas set for title rematch
Related Posts