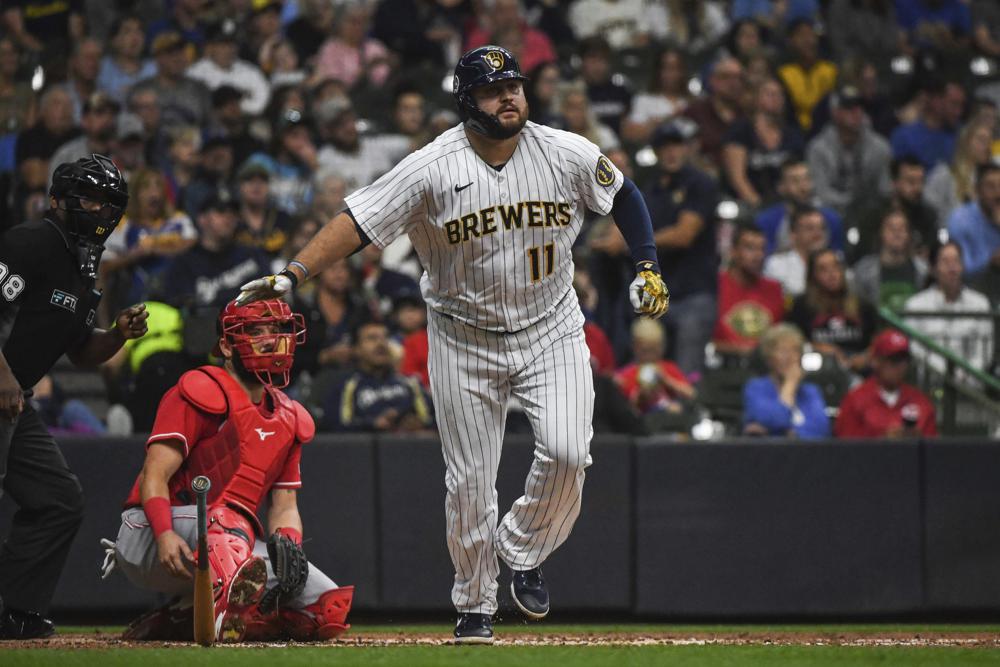 Willy Adames and Tellez hit back-to-back homers off Reds starter Justin Dunn (1-3) in the Brewers’ four-run second inning. Tellez added a solo shot off Luke Farrell in the fourth inning for his 30th homer of the season.

Brewers center fielder Garrett Mitchell made a diving catch of a TJ Friedl fly ball in the ninth inning that prevented the Reds from potentially tying the game.

Cincinnati’s Alejo López went 3 for 3 with his first career homer and a double.

The Reds trailed 7-2 through six innings but nearly came all the way back.

Cincinnati was behind 7-4 when Spencer Steer doubled and López hit an infield single to start the ninth. The Reds brought the tying run to second with nobody out after Matt Reynolds hit a grounder to the left side and reached second on third baseman Jace Peterson’s errant throw.

“I kind of just let instincts take over in that situation,” Mitchell said. “Just made a read on the ball, and once I felt like I got to a point where I was close, I called for it and then just went for it.”

Williams then struck out Jonathan India for his 12th save in 13 opportunities. India struck out on each of his five plate appearances.

“To get within one run, especially with how the game started out, we can carry that into tomorrow,” Reds manager David Bell said. “We came up short. That’s the bottom line. But we still gave everything we had to try to come back and win it.”

This marked Tellez’s fifth multi-homer game of the season. His huge performance delighted the 42,482 spectators who gave Milwaukee its third sellout of the season, capitalizing on a promotional giveaway of bobbleheads featuring Milwaukee Bucks superstar and Brewers minority owner Giannis Antetokounmpo.

Tellez and Adames have been dueling for the team lead in homers.

Adames’ two-run shot to center was his 28th of the season, briefly tying Tellez for the team lead. Tellez followed by delivering No. 29, a liner just inside the right-field foul pole.

“It’s always fun to have kind of that back-and-forth,” Tellez said. “He’s having a great year, too. I wouldn’t be where I am if he wasn’t hitting in front of me the majority of the year, getting on base and getting me pitches to handle.”

Tellez also had a two-run double in the first inning.

Adames needs just one more homer to match the single-season record for a Brewers shortstop. Hall of Famer Robin Yount hit 29 homers in 1982 while earning MVP honors and leading the Brewers to their lone World Series appearance.

Brewers starter Brandon Woodruff (10-4) struck out 11, walked one and gave up five hits and two runs in six innings.

Dunn struck out one but yielded six runs, six hits and three walks in three innings.

“He was pretty sick at the end,” Bell said. “He was trying to pitch through it today. I don’t think he realized how sick he was until the very end.”

When Farrell relieved Dunn in the fourth inning, he became the 63rd player to appear in a game for the Reds. That’s the highest total of any major league team and the most the Reds ever have used in a season. The previous Reds record was 57 players in 2003.

Farrell is the Reds’ 36th pitcher of the season, also a team record. The Reds used 35 pitches last year.

Brewers RHP Trevor Gott’s scheduled rehabilitation appearance with the Brewers’ Single-A affiliate in Appleton, Wisconsin, got rained out Sunday. Gott hasn’t pitched for the Brewers since Aug. 10 due to a forearm injury.

Reds: Return home for a four-game series with the Pittsburgh Pirates. Scheduled starters for Monday’s opener are LHP Mike Minor(4-10, 5.70 ERA) for the Reds and RHP Bryse Wilson (2-8, 6.11) for the Pirates.

Brewers: Have Monday off before starting a two-game series at St. Louis on Tuesday. Brewers manger Craig Counsell hasn’t named a starting pitcher for Tuesday but said it would be a bullpen game. The Cardinals will start LHP Jordan Montgomery (8-3, 3.08).