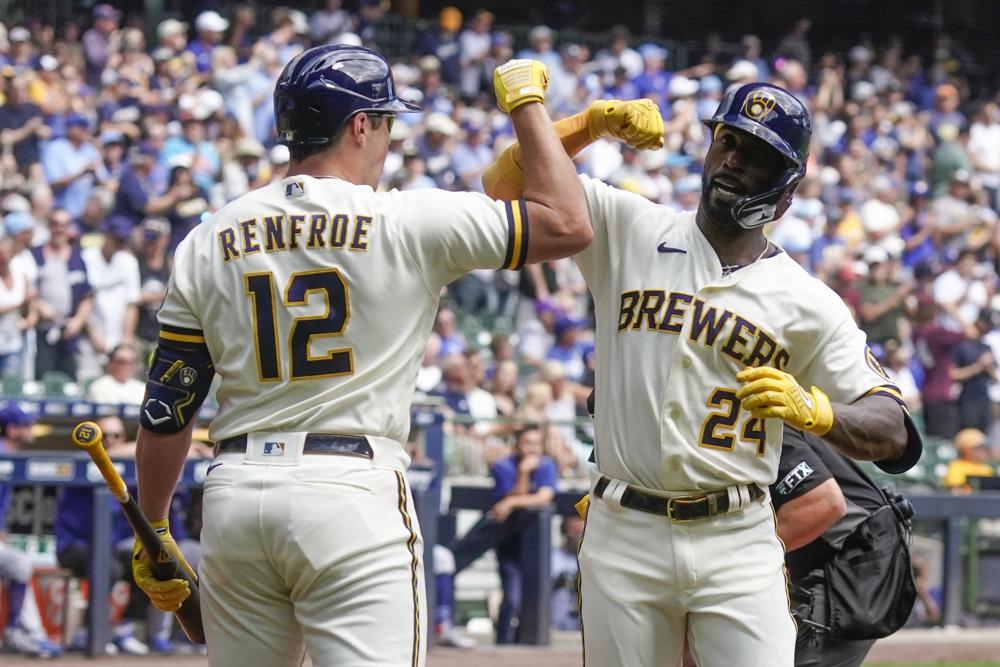 MILWAUKEE (AP) — If Andrew McCutchen gets back to hitting left-handers as effectively as he has for much of his career, it could go a long way toward helping the Milwaukee Brewers to a fifth straight playoff berth.

“We got a really good day from our guys that have hit left-handed pitching really well, and that’s Hunter and Cutch,” Brewers manager Craig Counsell said. “Big hits from them with men on base. Cutch had a huge day, a really impactful day.”

It isn’t just McCutchen, the Brewers altogether are struggling against lefties. The team entered Thursday ranked 25th out of 30 major-league teams in OPS against left-handers, and their .218 batting average against lefties ranked second-to-last ahead of only Miami.

“It was just good to have a couple of good at-bats,” McCutchen said. “It doesn’t matter if it’s right or left. We’re going to face both of them.”

McCutchen had three RBIs for his 19th career multi-homer game and first since June 1, 2021, when he also hit a pair for the Philadelphia Phillies in a 17-3 blowout of the Cincinnati Reds. His homers on Thursday were a solo shot in the first inning and a two-run blast in the third.

Renfroe, who went 3 for 3, added a two-run homer in the fifth to help the Brewers build a 5-0 lead.

“Stuff happens and you’ve just got to make pitches,” Heaney said. “Just like with anything, it doesn’t really change with how I approach anything. I just need to lock in and need to make a little bit better pitch there.”

Milwaukee’s Corbin Burnes (9-5) held the Dodgers scoreless for five innings before running into trouble in the sixth. The reigning NL Cy Young Award winner ended up striking out six and allowing three runs, six hits and two walks in 5 2/3 innings.

Devin Williams struck out the side in the ninth for his eighth save in as many opportunities.

The Dodgers got back in the game by scoring three runs in the sixth inning.

Brewers center fielder Tyrone Taylor, who reached over the fence to catch a drive from Tampa Bay’s David Peralta on Aug. 9, nearly robbed an opposing player again on a two-out shot from Gavin Lux. The ball was initially in Taylor’s glove but fell out and bounced back into play after he reached his arm over the center-field wall.

“I thought it was a heck of an effort,” Dodgers manager Dave Roberts said. “It’s probably one of the better non-catches you’ll ever see.”

Lux’s two-run triple cut Milwaukee’s lead to 5-3 and took Burnes out of the game. Brad Boxberger replaced Burnes and walked Joey Gallo to put runners on the corners before striking out Chris Taylor to end the threat.

Roberts is hopeful that RHP Brusdar Graterol will be available for this weekend’s series with the Miami Marlins. Graterol hasn’t pitched since July 10 due to a shoulder injury but has been on a rehabilitation assignment with Triple-A Oklahoma City.

The Brewers reinstated RHP J.C. Mejía and optioned him to Triple-A Nashville. Mejía has served his 80-game suspension after testing positive for the performance-enhancing substance Stanozolol.

Brewers: Head to Chicago to begin a three-game series with the Cubs. Scheduled starters Friday are LHP Aaron Ashby (2-10, 4.24) for the Brewers and RHP Keegan Thompson (9-5, 3.67) for the Cubs.

TOP PHOTO: Milwaukee Brewers’ Andrew McCutchen is congratulated by Hunter Renfroe after hitting a home run during the first inning of a baseball game against the Los Angeles Dodgers Thursday, Aug. 18, 2022, in Milwaukee. (AP Photo/Morry Gash)