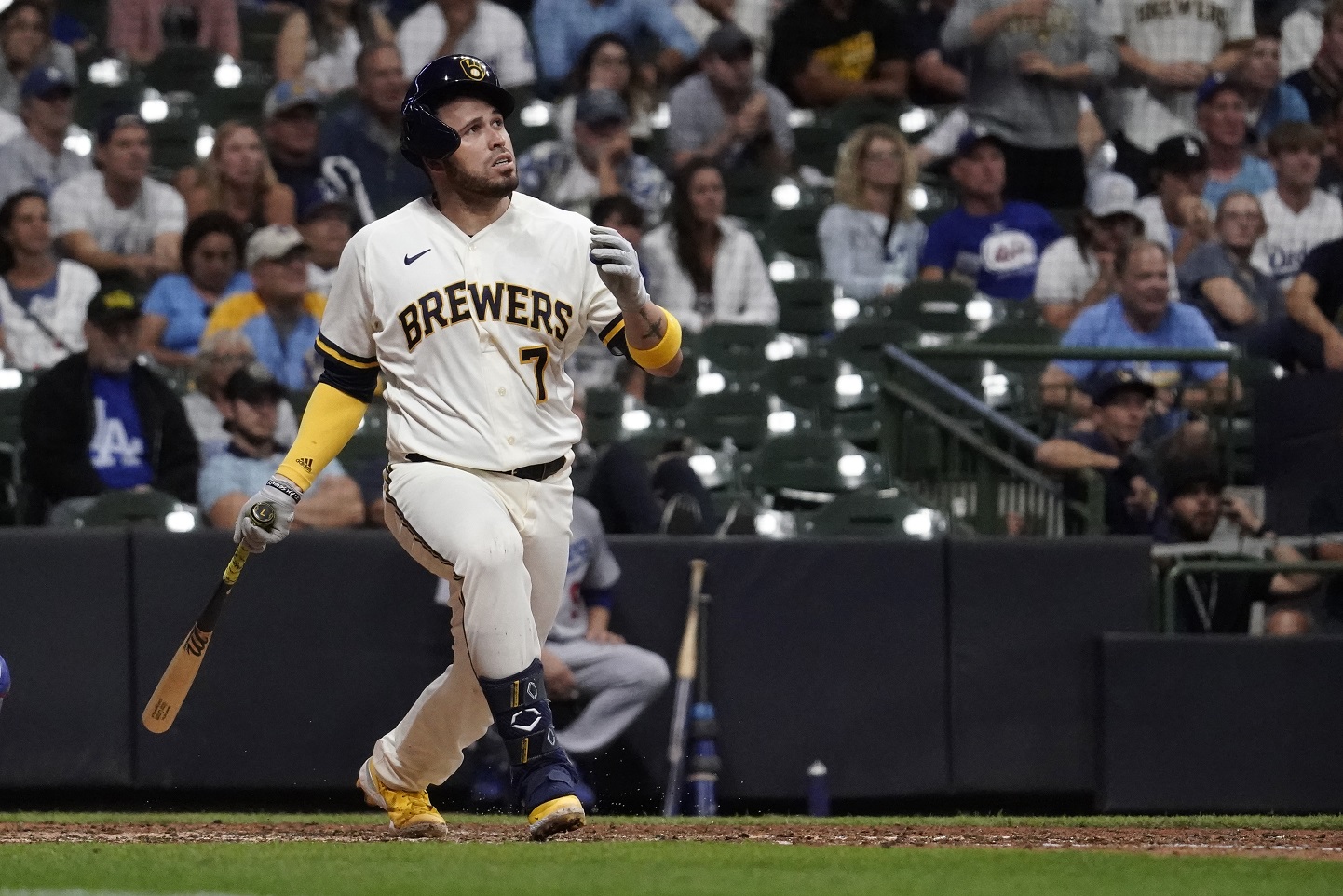 “I just tried to make contact,” said Caratini, who was mobbed by his teammates after the hit. “Whether it’s a flyball or putting the ball in play, try to get at least one run in and thankfully it worked.”

A sensational catch by Dodgers center fielder Chris Taylor in the 10th kept the game tied. Taylor homered in the seventh to make it 3-all.

Batting with the bases loaded and one out against Kimbrel (3-5), Caratini blooped a hit to right field that scored automatic runner Andrew McCutchen and Hunter Renfroe, who had reached on a bunt single.

Renfroe crossed the plate just a few steps behind McCutchen, who had held up to see if the ball would be caught by right fielder Mookie Betts.

“Probably gambling a little bit,” Renfroe said. “I got a good read on it. I knew he wasn’t playing back so he wasn’t going to catch it.”

The Brewers won despite getting just five hits off seven pitchers. The teams have split the first two games of a four-game set.

The Dodgers have lost two of three since a 12-game winning streak.

“When I go out there on the mound, I feel like I’m going to my job every time,” said Kimbrel, who blew his fourth save. “I have the confidence. I’m throwing my pitches but it’s just not working out. It’s going to change. It has to.”

Justin Turner’s run-scoring single off Milwaukee reliever Brent Suter (4-4) gave the Dodgers a 4-3 lead in the top of the 11th.

In a back-and-forth matchup, the Brewers nearly won in the 10th. With two outs and two on, McCutchen hit a liner deep into the left-center field gap that Taylor caught with a flying, backhanded grab. Reliever Alex Vesia stood behind the mound and yelled.

“It’s just one of those situations where you know that if you don’t catch it the game’s over,” Taylor said. “I barely caught it. I didn’t even know I caught it until I looked in my glove.”

The Brewers jumped on Dodgers rookie starter Ryan Pepiot in the first. Christian Yelich drew a leadoff walk and Willy Adames followed with his 23rd homer.

Milwaukee starter Brandon Woodruff pitched four shutout innings before Joey Gallo tagged him for a leadoff homer in the fifth. It was the third homer for Gallo, who was inserted in the lineup in place of struggling Cody Bellinger, since coming to the Dodgers earlier this month in a trade deadline deal with the New York Yankees.

Betts followed two batters later with another solo homer to make it 2-all.

Yelich hit a solo homer in the fifth, ending his 0-for-26 slump. It was his first home run since July 2 at Pittsburgh and first at home since May 5.

“It felt good to have something positive for once,” Yelich said. “It’s been awhile since I’ve done that.”

Taylor’s solo home run in the seventh off Matt Bush pulled the Dodgers even again.

Woodruff gave up five hits and two runs in five innings. He walked two and struck out eight.

“They’re a really, really good baseball team,” Woodruff said. “That was a heck of a win. We needed that. Hopefully we can carry that momentum into tomorrow and the rest of this series.”

Pepiot, making his sixth start of the season, surrendered three hits and three runs in 4 2/3 innings. He walked five and had six strikeouts.

Dodgers: LHP Clayton Kershaw didn’t make the trip to Milwaukee but has been throwing at his home in Texas, manager Dave Roberts said. Kershaw has been out since earlier this month with back soreness. … LHP Andrew Heaney, who sustained a left arm contusion after being struck by a comebacker that forced him to leave his last start in Kansas City on Saturday, threw a bullpen session on Tuesday and will make his next scheduled start on Thursday in the series finale, Roberts said.

Brewers: RHP Adrian Houser (right elbow) gave up five hits and three earned runs in a 28-pitch rehab outing with Triple-A Nashville on Tuesday. … C Omar Narváez (left quadriceps), who began a rehab assignment with Nashville, went 2-for-4 as the DH. He is expected to be behind the plate for Nashville on Wednesday.

The Brewers recorded their seventh walk-off victory of the season and improved to 7-5 in extra innings. Milwaukee moved to 23-15 in one-run games.

Despite the loss, the Dodgers have been dominant against the NL Central, going 7-0 vs. Chicago, 7-0 vs. Cincinnati, 2-1 vs. St. Louis, 1-1 against Milwaukee and 1-5 vs. last-place Pittsburgh.

Dodgers: Tony Gonsolin (14-1, 2.24 ERA) is tied for second in the major leagues in wins. He’ll be making his first start vs. the Brewers.