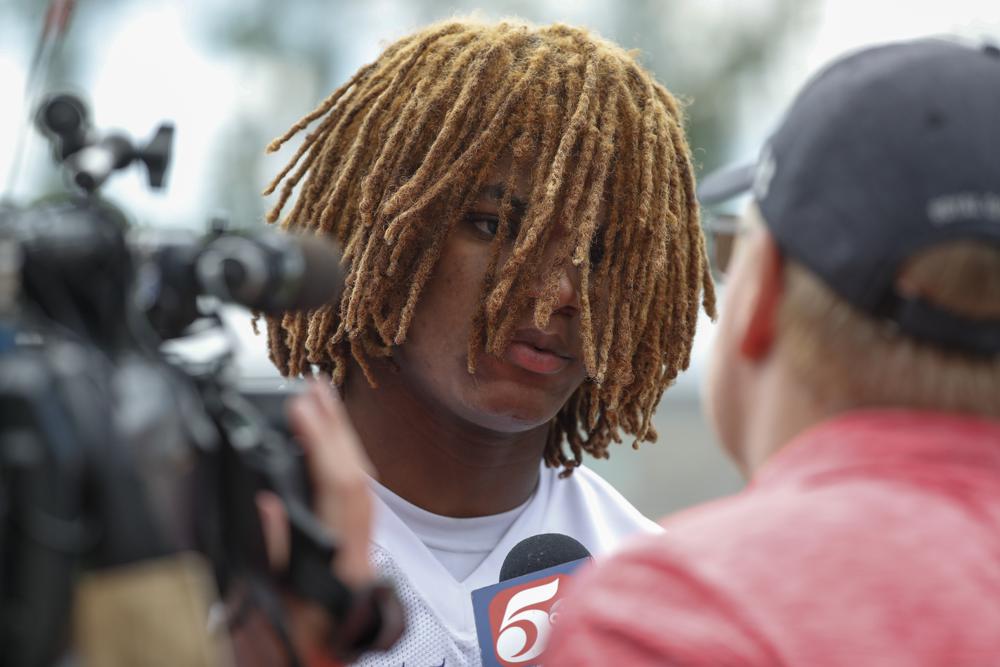 EAGAN, Minn. (AP) — The path that led Lewis Cine to pro football has taken plenty of turns, with more life experiences packed into 22 years than the typical NFL rookie.

If he doesn’t crack the starting lineup in time for Minnesota’s season opener, well, that’ll hardly be worth sweating — even for a first-round draft pick.

“Nothing is going to be handed to me. I’m going to have to work, and I definitely understand that, but I know there’s a place for me on the defense,” said Cine, who has spent the majority of training camp on the second team behind Harrison Smith and Camryn Bynum. “I know I’m going to contribute somewhere, defense and special teams, so take my spot and take my assignment and do the best way I can.”

The Vikings held Smith out of the first exhibition game at Las Vegas last week for injury precaution, a veteran privilege of sorts for a six-time Pro Bowl pick entering his 11th year in the league. Cine started that game next to Bynum, who was a bright spot as a rookie backup and spot starter last season when Xavier Woods played next to Smith in the back end.

Woods was not re-signed and Cine, the hard-hitting former Georgia star fresh off the national championship team, landed in Minnesota with the 32nd overall selection.

The education process began for Cine — pronounced “seen” — much earlier than most of his peers. Born in Haiti when his mother was 16, Cine moved to Florida with extended family at age 4. He hopped to Massachusetts next, then Texas, living with different relatives along the way as he began to build the profile of a top prep football prospect. He wound up at Georgia and played on one of the most dominant defenses in the recent history of the sport.

Cine also has a 5-year-old daughter, Bella, whose presence prompted him to skip most of the usual college fun being had by teammates and classmates.

“The game of football can end in an instant, so I’m enjoying the journey, making relationships, basically enjoying the company of the guys that I’m doing this with,” Cine said.

He’s planning on the company of family in Minnesota with him this fall, too. His mother has been preparing to leave Chile, where she has been living. His daughter will start kindergarten. In the meantime, he’s been checking out the ample lakes in the area and taken up fishing in classic fashion for a Minnesotan.

“I’m having a great time, being around the water,” Cine said. “It’s a place to unwind and kind of take you away from the football world. Football can take a mental toll.”

His face often covered partially by his dyed dreadlocks, Cine carries himself with a palpable level of maturity and expresses himself in terms revealing a depth of human understanding developed along his winding road to the NFL.

One surprise so far?

So regardless of whether it’s Bynum or Cine on the field for the first snap on Sept. 11 when the Vikings host rival Green Bay, Cine will continue to play an increasingly important part of this revamped defense under Donatell.

TOP PHOTO: FILE – Minnesota Vikings safety Lewis Cine speaks with the media after taking part in drills at the NFL football team’s practice facility in Eagan, Minn., Wednesday, June 8, 2022. First-round draft pick Lewis Cine is expected to anchor Minnesota’s secondary for many years to come, but rookies have to earn their way into the lineup. (AP Photo/Bruce Kluckhohn, File)

0
0   0
previous 49ers-Vikings practice: Cousins is back; Lance is back home
next Gonsolin gets 15th win, as Brewers fall 2-1 to best team in Majors
Related Posts