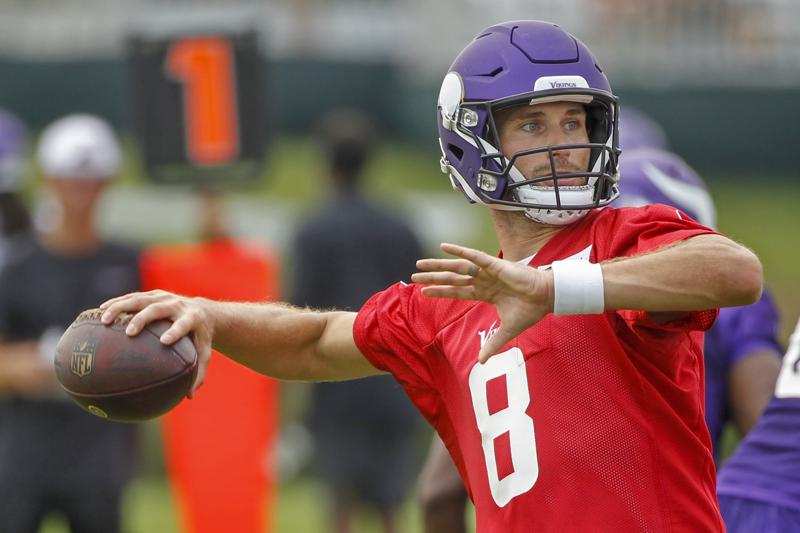 49ers-Vikings practice: Cousins is back; Lance is back home

49ers-Vikings practice: Cousins is back; Lance is back home

EAGAN, Minn. (AP) — This absence for Kirk Cousins was far more convenient for him and the Minnesota Vikings.

After catching COVID-19 and staying home for five days in line with the current guidelines, Cousins returned to practice Wednesday with the Vikings for their first of two joint sessions with the visiting San Francisco 49ers.

Though Cousins has said throughout the offseason that he can’t afford to miss any on-field repetitions as he continues to soak up new head coach Kevin O’Connell’s offense, the timing of his latest quarantine was such that he only missed one full-speed practice last Thursday.

The Vikings had a light workout Friday, traveled Saturday and played Sunday at Las Vegas, where Cousins was already unlikely to play more than a series or two if at all. Players were off Monday.

“I was commenting to my wife that if I was to miss five days and you had to pick which five, strategically we probably picked a good five,” Cousins said.

Last season, when the NFL had strict COVID-19 protocols in place, particularly for unvaccinated players, Cousins was sidelined for five days early in training camp after being deemed a close contact because backup Kellen Mond tested positive. Three of the four quarterbacks on the roster at the time had to sit out.

Then Cousins himself contracted the virus two days before the Jan. 2 game at Green Bay and had to stay home while the Vikings lost with Sean Mannion at quarterback and were eliminated from contention for the playoffs.

With Cousins watching from home, Mannion and Mond split the snaps almost evenly in the preseason opener against the Raiders. Mond has taken steps this summer toward becoming the second-stringer, after he was firmly entrenched as the No. 3 option as a rookie. Mond went 9 for 14 for 119 yards and two touchdowns without a sack or a turnover, for whatever those statistics can mean in a meaningless game.

“There was some resiliency there,” offensive coordinator Wes Phillips said. “There were a couple plays he’d probably like to have back or maybe would’ve liked to have let go and throw into a window, and you know what? He just kept playing. There was no flinch.”

Cousins played crisply during the full-team drills against San Francisco’s defense, even uncharacteristically punctuating his catch phrase — “You like that?” — with an expletive after a completion to Adam Thielen.

“I love it when any of my teammates get fired up,” said rookie Ed Ingram, who has moved into the starting right guard spot.

The 49ers had defensive lineman Arik Armstead (knee) and cornerback Emmanuel Moseley (hamstring) back on the field for individual drills, though safety Jimmie Ward is missing with a hamstring injury that will keep him out for awhile.

The 49ers and Vikings had their share of predictable jawing after certain plays here and there. Unlike the fight that broke out Wednesday between the Carolina Panthers and New England Patriots in their joint practice, there were no visible problems.

“That’s a pretty big emphasis. We have a deal with Kevin. Anyone throws a punch, we’re going to kick them out of practice,” 49ers coach Kyle Shanahan said. “We know how important it is to get this practice work in right now.”

Particularly with a young, new starting quarterback in Trey Lance.

Just like in the preseason game Friday against Green Bay, Lance hit rookie Danny Gray on a deep ball for a long touchdown. The connection Wednesday came in a 7-on-7 drill against veteran cornerback Patrick Peterson.

“Some ups and downs,” said Lance, a native of Minnesota who was the third overall pick in the 2021 draft out of North Dakota State. “I’m excited to watch it, for sure. It’s just good to go against another defense — 1-on-1s, 7-on-7, red zone, everything against another team.”

The 49ers were enjoying their extended road trip, having arrived Tuesday in advance of the game Saturday. Some of them spent time at the Mall of America the night before, and Minnesota’s 4-year-old gleaming suburban complex turned plenty of heads from the visitors.

0
0   0
previous WATCH: Down 4-3 in bottom of 11th, Brewers Caratini the hero in win over MLB-best Dodgers
next Cine it all: Vikings safety keeping perspective in 1st camp
Related Posts