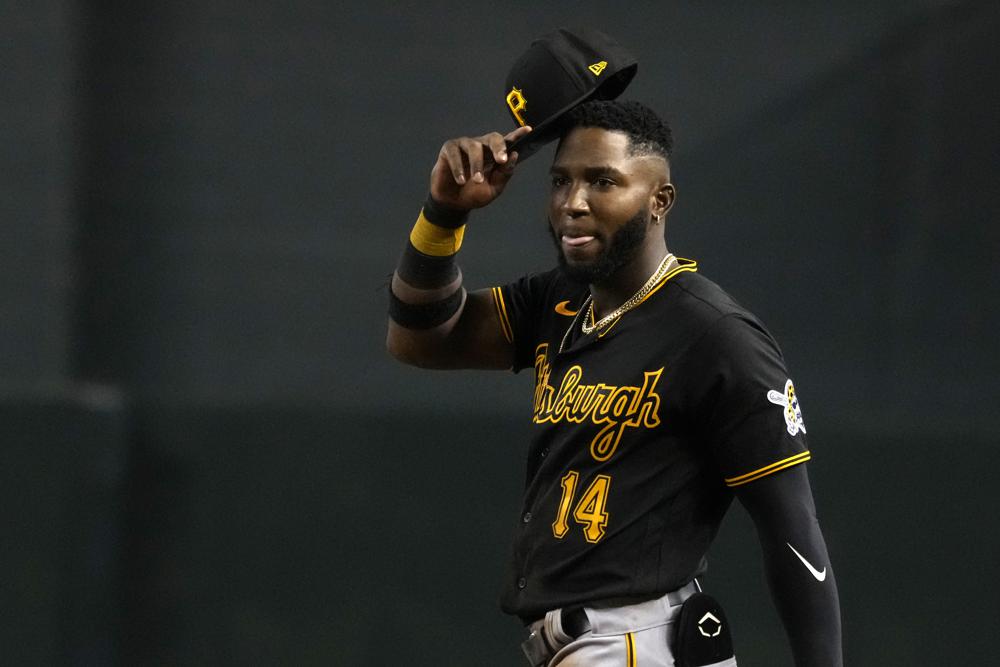 PHOENIX (AP) — The moment was hilarious because it was so relatable.

Pittsburgh Pirates infielder Rodolfo Castro and third base coach Mike Rabelo stood and stared, mortified, at a smartphone that had mistakenly made its way onto a Major League Baseball field on Tuesday night.

Even third base umpire Adam Hamari had the perfect reaction, pointing at the phone that came flying out of Castro’s back pocket during a head-first slide, trying not to giggle at the absurdity of the situation.

Those around the sport cringed along with them.

“That’s obviously not something that should happen,” Yankees manager Aaron Boone said.

Yet it did. Just like it does to pretty much all of us. Who hasn’t had their ringer go off at a wedding, a funeral, school or church? Or been at the apex of a cannonball into the pool, only to realize their phone was still in their back pocket?

This faux pas just happened to be at a televised big league game, creating a video clip seen by millions.

“I just remember getting dressed, putting my pants on, getting something to eat, using the restroom,” the 23-year-old Castro said through a translator Tuesday night after the Pirates lost 6-4 to Arizona. “Never did it ever cross my mind that I still had my cellphone on me.”

Some in baseball said that was no excuse. Mets right-hander Taijuan Walker said it’s “not a good look at all.”

“That’ll never happen here,” the pitcher added. “And if it did, we’d have some veterans step up.”

Others were more forgiving. D-backs first baseman Christian Walker said the last thing he does before heading out to the field for the game is call his wife. He’s never taken his phone to the field, but admits it’s almost happened.

“I’ve gotten down the stairs before and been like ‘Oh, my phone’s still in my pocket!’” Walker said. “Just not even thinking about it. Then you run up and drop it off.”

“One hundred percent could see it happening at the beginning of a game,” Dickerson said. “Guys are pregame, dressed in their uniform, listening to music, obviously Bluetooth through your phone, walking around getting ready. You take your earphones out and your mind is on getting stretched and being on time … I definitely could see it.”

Walker said the strangest thing about the incident was it didn’t happen until the fourth inning: “Wouldn’t you sit on it between innings on the bench?”

Castro said he put his oven mitt-like sliding glove in his pocket and forgot about the phone, which now had some cushion. Regardless of how it happened, plenty around baseball got a few laughs at the infielder’s expense.

“I think it’s hilarious,” Rockies closer Daniel Bard said. “I have no clue what he would be doing with that. And how you forget that. You can feel it in your pocket. I don’t really know what to think of it. It’s kind of funny.”

It’s far from the first time a phone has made a cameo on a pro sports field. One of the most famous examples came nearly 20 years ago when New Orleans Saints receiver Joe Horn pulled out a flip phone — remember those? — that he had hidden in the padding around the goalpost and then acted like he was taking a call after scoring a touchdown.

Of course, there are legitimate reasons MLB doesn’t want phones on the field.

MLB has cracked down on technology use by players since the Houston Astros used live TV feeds to steal opposing teams’ signs during their run to the 2017 World Series championship and part of the subsequent season.

Astros general manager Jeff Luhnow and then-manager A.J. Hinch were suspended for the 2020 season. The Astros also were fined $5 million and forfeited their first- and second-round picks in 2020 and 2021.

That kind of discipline obviously isn’t warranted in this situation, but phones on the field are still a no-no. MLB hadn’t announced any sort of punishment for Castro as of Wednesday afternoon.

“I’m sure we’ll hear from the league, but I feel like everybody, including the umpires — which, again, they handled it great — it was a young kid who made a mistake and put his phone in his pocket,” Pirates manager Derek Shelton said. “There was no intent to use it or do anything with it.”

TOP PHOTO: Pittsburgh Pirates’ Rodolfo Castro reacts after making the last out against the Arizona Diamondbacks in the eighth inning of a baseball game, Tuesday, Aug. 9, 2022, in Phoenix. Called up from Triple-A Indianapolis before the game, Castro slid headfirst into third in the fourth inning against the Diamondbacks and had his phone fly out of his back pocket. (AP Photo/Rick Scuteri)