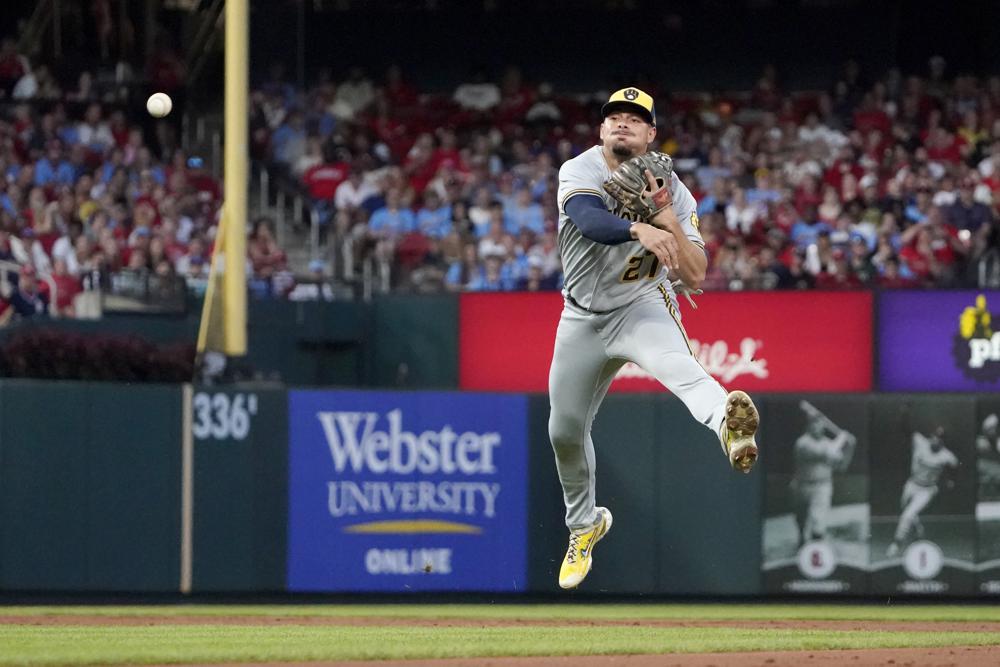 Montgomery (5-3), acquired from the New York Yankees in a trade for outfielder Harrison Bader on Aug. 2, allowed four hits, struck out eight and walked two. The left-hander pitched five scoreless innings in a 1-0 win over the Yankees in his Cardinals debut last Saturday.

“This clubhouse is great,” Montgomery said. “They’ve made it easy for me to fit in. They’ve gone out of their way to help me feel welcome.”

Victor Caratini had three hits and an RBI for Milwaukee, which had a two-game winning streak snapped.

Montgomery has given up six hits in 11 innings for St. Louis with nine strikeouts and three walks.

“It’s hard enough getting traded, probably a little bit out of the blue for him,” Goldschmidt said. “He’s proven he was ready. Hopefully, he can keep it going and we can play well behind him.”

Ryan Helsley picked up his 12th save in 15 opportunities with two scoreless innings of relief.

Montgomery struck out Christian Yelich and Willy Adames with runners on first and third to end a threat in the fifth.

“It’s a guy you can tell has been there before on the big stage,” St. Louis manager Oliver Marmol said. “That’s a perfect example of just keeping your composure, knowing that if you execute, you’ll be fine.”

Goldschmidt hit a two-run homer in the first off Eric Lauer (8-4). It was Goldschmidt’s team-leading 28th of the season and his NL-leading eighth since the All-Star break. An MVP candidate, Goldschmidt leads the majors with 28 multi-RBI games.

Arenado pushed the lead to 3-0 with his 25th homer of the season in the sixth.

Caratini’s RBI single in the seventh got the Brewers on the scoreboard. Luis Urias had opened the inning with a triple and Caratini followed with his hit.

“I think the one to (Arenado) might have been the worst pitch I’ve thrown in my life,” Lauer said. “It was a changeup middle and good hitters aren’t going to miss that.”

The Brewers have lost nine of their last 11 games against NL Central opponents.

The Cardinals lead the series over their NL Central rivals 7-6. The teams will play six more times. The winner of the regular-season series will get the nod as the division winner in a case of a tie, adding more importance to the next six games.

Brewers: RHP Adrian Houser tossed three innings without allowing an earned run in a rehab start on Thursday at Triple-A Memphis. He has been out since July 1 with a right flexor issue.

Cardinals: RHP Jack Flaherty threw 35 pitches in a rehab start at Triple-A Memphis on Thursday. He gave up four hits and three earned runs over one inning. Flaherty is likely to start again next week. He has been slowed by a right shoulder strain and was placed on the 60-day Injured List on June 27.

RHP Adam Wainwright (8-8, 3.42) will face Milwaukee RHP Corbin Burnes (8-5, 2.45) in the second game of a three-game series on Saturday. Wainwright is coming off a four-inning, 110-pitch effort in a 12-9 win over the Yankees on Sunday. He gave up eight hits and six earned runs in that contest and received a no-decision. Wainwright is 20-14 with a 2.81 ERA in 52 lifetime appearances against Milwaukee. Burnes, the reigning NL Cy Young Award winner, has thrown seven scoreless innings in both starts against St. Louis this season. He has 16 quality starts in 22 games.