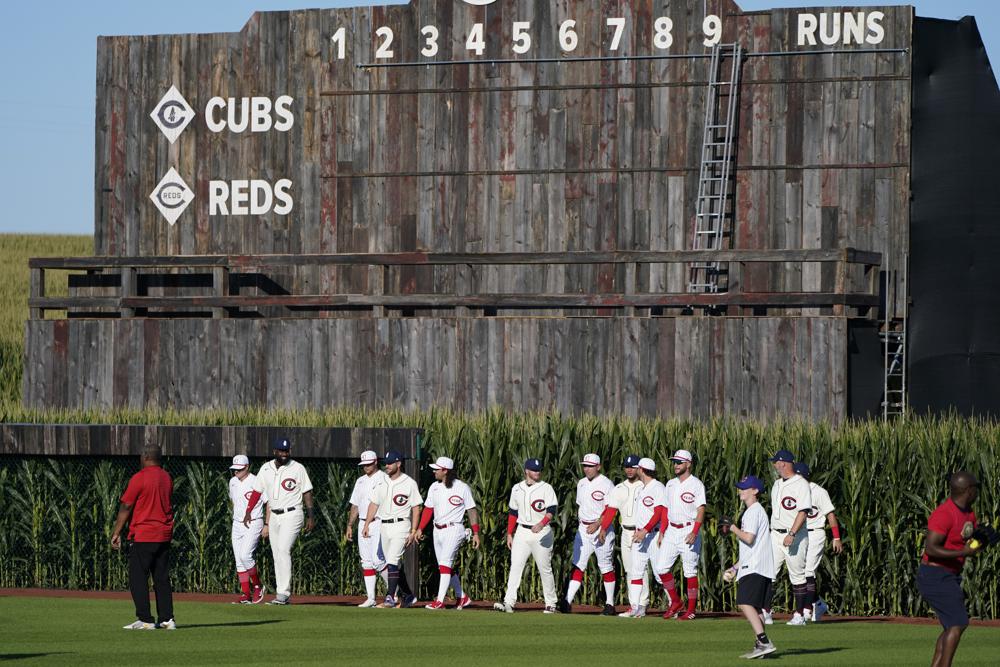 DYERSVILLE, Iowa (AP) — Standing among rows of Iowa cornstalks, Nico Hoerner had Johnny Bench on his left and Billy Williams right next to him.

For sure. Even for a “Field of Dreams.”

Nick Madrigal had three hits for Chicago in a throwback ballpark a short walk away from the main field for the 1989 movie. Smyly (5-6) pitched five scoreless innings and Ian Happ had two hits, including an RBI double that drove in Hoerner during a fast start for the Cubs.

The night began with Hall of Famer Ken Griffey Jr. and his father emerging from the iconic outfield cornstalks for their own version of a memorable scene from the film, delighting the sellout crowd of 7,823.

“Hey dad, do you wanna have a catch,” Junior said.

The Griffeys then played catch as more parents and children joined them on the field with their own balls and gloves, followed by the Cubs and Reds, dressed in special uniforms inspired by how the franchises looked in the early 20th century.

Williams and Bench were among a group of Hall of Famers from each franchise that also joined the festivities. Bench stood behind the plate for a ceremonial first pitch from Fergie Jenkins.

“What they’ve done here is incredible. … I think every baseball player should experience this,” Reds third baseman Kyle Farmer said.

Backed by Chicago’s three-run first, Smyly improved to 3-1 with a 2.49 ERA in his last four starts. The left-hander allowed four hits and walked two while celebrating the fifth birthday for his daughter, Parker.

Rowan Wick worked the ninth for his seventh save.

“A game like this … you just feel like a kid again,” Smyly said. “You’re just out there playing baseball in the middle of Iowa.”

Cincinnati dropped its fourth straight game. Matt Reynolds hit a two-run double in the seventh, but the last-place Reds went down in order in the final two innings.

Major League Baseball returned to Dyersville — population of about 4,400 — after its first “Field of Dreams” game was a smashing success. The Chicago White Sox topped the New York Yankees 9-8 on Tim Anderson’s electric homer last year in the first MLB game in Iowa.

But the sequel lacked the drama of the original version. Chicago and Cincinnati dropped out of contention a long time ago, and the Cubs grabbed control right at the start against Nick Lodolo (3-4).

Seiya Suzuki and Happ each hit an RBI double in the first, and Hoerner had a run-scoring single. The rally started after Lodolo retired the first two batters.

“I didn’t make pitches when I needed to when I was ahead in the count,” Lodolo said.

Madrigal tacked on an RBI single for a 4-0 lead in the fourth.

Costner narrated a tribute video for Liotta that was aired in the first.

Hall of Fame right-hander John Smoltz was on the broadcast for FOX Sports after his father, John Adam Smoltz, died earlier Thursday.

“He lived by his faith, he loved family and he would be so mad if I didn’t do this game,” the 55-year-old Smoltz said during the broadcast.

Cubs: Willson Contreras appeared to roll his left ankle when he tried to scurry back to second after rounding the bag on Patrick Wisdom’s single in the third. He was tagged out, but he was back behind the plate for the bottom half of the inning.

Reds: 2B Jonathan India (leg contusion) was replaced by Reynolds before the start of the fourth. India was hit on his lower left leg by a pitch in the first. Manager David Bell said India is day to day.

Following an off day, the three-game series resumes on Saturday in Cincinnati. Graham Ashcraft (5-2, 3.94 ERA) pitches for the Reds, and fellow right-hander Adrian Sampson (0-3, 3.83 ERA) starts for the Cubs.