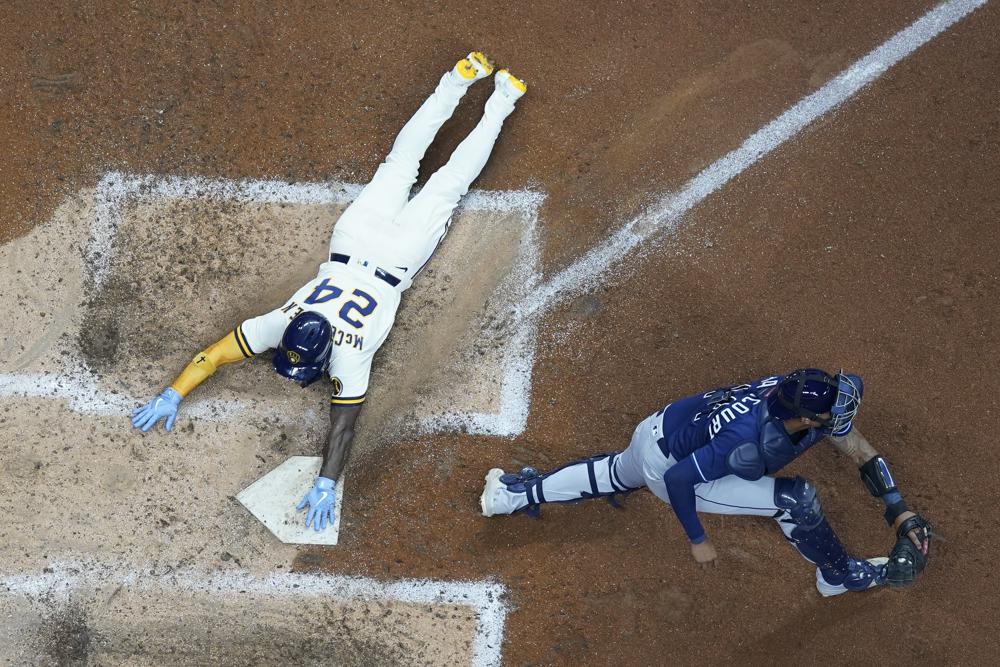 MILWAUKEE (AP) — Andrew McCutchen and Kolten Wong each drove in two runs and the Milwaukee Brewers broke out of their slump to beat the Tampa Bay Rays 5-3 on Tuesday night.

The Brewers won for just the second time in eight games. They’re 2-5 and have fallen out of first place in the NL Central since trading four-time All-Star closer Josh Hader to the San Diego Padres last week.

Yandy Díaz hit a two-run homer for the Rays. Brewers center fielder Tyrone Taylor made a leaping catch to rob Tampa Bay’s David Peralta of a homer in the second inning.

Milwaukee’s Freddy Peralta (4-2) struck out four while allowing two runs, two hits and no walks over five innings in his second start since coming off the injured list. Peralta, who threw 65 pitches Tuesday, had missed nearly 2½ months with a shoulder injury.

Matt Bush struck out two and retired the side in order in the ninth to earn his second save of the season. His other save came on April 23, when he was still with the Texas Rangers, who traded him to the Brewers last week.

McCutchen hit an RBI ground-rule double in the first inning and put the Brewers ahead for good with a run-scoring single in the fifth. His double hit the warning track and bounced over the center-field wall to bring home Christian Yelich, who had drawn a leadoff walk.

The run was unearned because Yelich had advanced to second on pitcher Jimmy Yacabonis’ errant pickoff throw.

Yacabonis was filling the role of an opener and worked only the first inning before giving way to Ryan Yarbrough.

Peralta led off the top of the second with a drive to right center, but Taylor timed his jump correctly and reached his glove over the wall to make the catch and prevent a game-tying homer. Taylor added a two-out RBI single in the bottom of the second to extend Milwaukee’s lead to 2-0.

Díaz tied it in the third when he broke out of an 0-for-21 slump with a homer to right center.

The Brewers regained the lead in the fifth. After Willy Adames singled and Rowdy Tellez walked against Yarbrough (0-7), McCutchen greeted Ryan Thompson with a single to center that brought home Adames.

Wong followed with a two-run double into the left-field corner to make it 5-2.

Tampa Bay’s Jose Siri hit a one-out RBI double to right in the seventh, but got thrown out attempting to stretch it to a triple. Adames took the throw from right fielder Hunter Renfroe and fired to third in time to retire Siri.

Brewers: Manager Craig Counsell said C Omar Narváez will probably remain on the injured list beyond the minimum of 10 days. Narváez went on the injured list Thursday with a strained left quadriceps. … P Adrian Houser (right elbow) will make his next rehabilitation appearance for Triple-A Nashville on Thursday.

LHP Jeffrey Springs (4-3, 2.50 ERA) starts for the Rays and RHP Brandon Woodruff (9-3, 3.49) pitches for the Brewers as this two-game series concludes Wednesday afternoon.