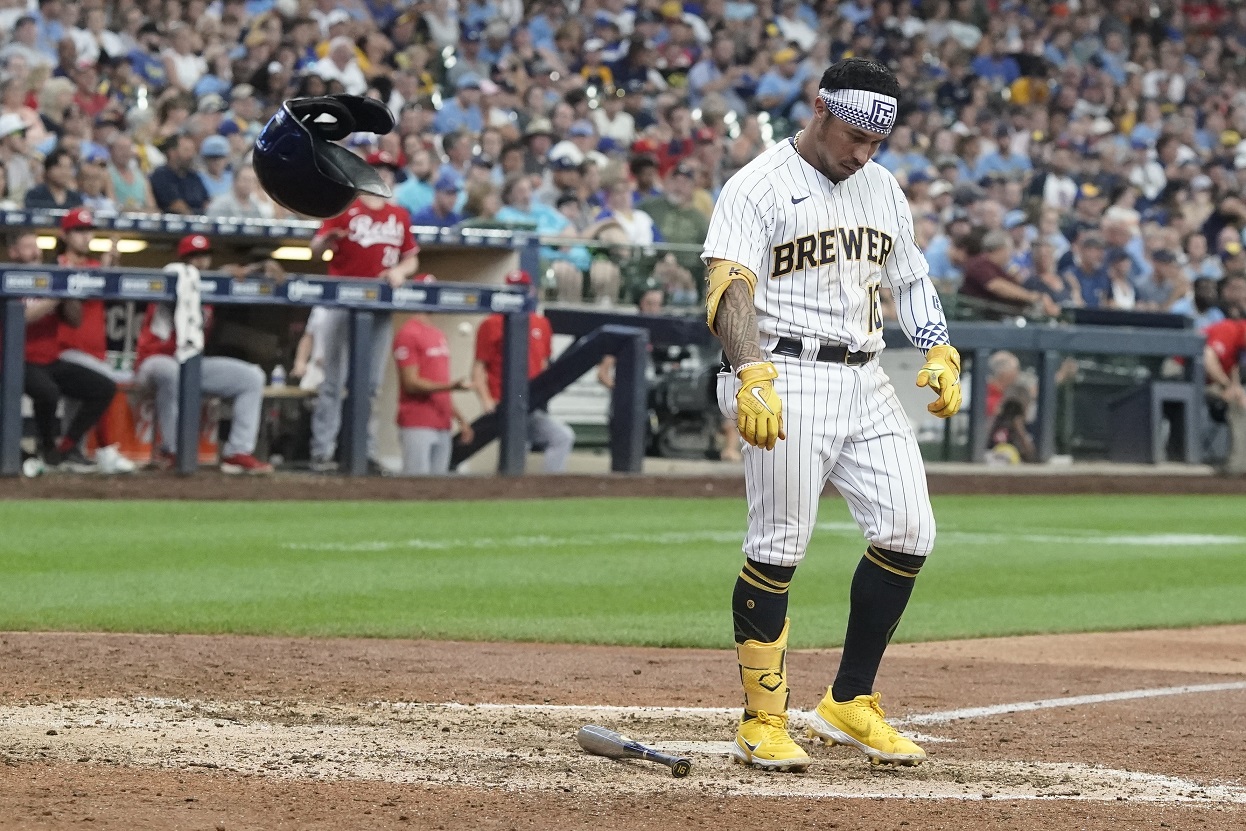 MILWAUKEE (AP) — Donovan Solano had a sacrifice fly in the 10th inning and the Cincinnati Reds beat the Milwaukee Brewers 4-2 on Sunday.

Solano, who also had an RBI double in the eight, had an RBI flyball in the 10th off Devin Williams (2-2) as the Reds won for the eighth time in 10 games.

“That’s what we’re here for … to win games,” Reds manager David Bell said. “The guys in the clubhouse, no matter what, they go out and do everything in their power to find ways to win games. … It’s really nice to have some success and see our team enjoy what’s happening. It’s good motivation to keep it going and finish out strong.”

Willy Adames and Keston Hiura homered for the Brewers. Hiura’s solo shot in the ninth tied the game.

Mike Brousseau made an error in the 10th that allowed the go-ahead run score for the Reds.

Brewers starter Corbin Burnes went six innings and allowed just a run on two hits and a pair of walks while striking out nine. He didn’t allow a hit until Nick Senzel doubled with two outs in the fourth and his only run came an inning later on a two-out, solo home run by Reds catcher Michael Papierski.

Adames’ team-leading 22nd home run of the year accounted for the only run allowed by Reds starter Graham Ashcraft. The right-hander, filling a spot opened when Hunter Greene landed on the IL ahead of the series opener, scattered four hits and two walks while striking out three over 5 2/3 innings.

“It was a grind today, that was for sure but was a great team win,” Ashcraft said. “We ended up doing what we needed to do, locking in and shutting the door.”

The two home runs were all either team had been able to muster heading into the eighth when Jonathan India reached on a pinch-hit single and scored on Solano’s hit.

Hiura, who homered Saturday night in his first start since returning from Triple-A Nashville led off the ninth with his 10th off the season off Hunter Strickland (3-3).

“He’s had a good couple of days,” Counsell said.

Milwaukee designated left-handed reliever Jake McGee for assignment Sunday, one day after allowing three hits for a second consecutive outing. McGee signed with the Brewers on July 23, after he was released by the Giants and posted a 6.35 ERA in six appearances.

Right-hander Jason Alexander was recalled from Triple-A Nashville to fill McGee’s spot on the active roster.

Reds: RHP Jeff Hoffman (right forearm tightness) won’t be activated from the IL Monday as expected after suffering a setback during a bullpen session Saturday in Milwaukee.

Reds: RHP Justin Dunn is set to make his Reds debut and will face his former team when Cincinnati opens a three-game series against the Mets at Citi Field.

Brewers: After getting Monday off, Milwaukee returns to action Tuesday to open a two-game interleague set against the Rays behind RHP Brandon Woodruff (3-2, 4.46) who is 4-0 with a 2.17 ERA in seven starts since coming off the IL in June.

TOP PHOTO: Milwaukee Brewers’ Kolten Wong throws his helmet after striking out to end the eighth inning of a baseball game against the Cincinnati Reds Sunday, Aug. 7, 2022, in Milwaukee. (AP Photo/Morry Gash)