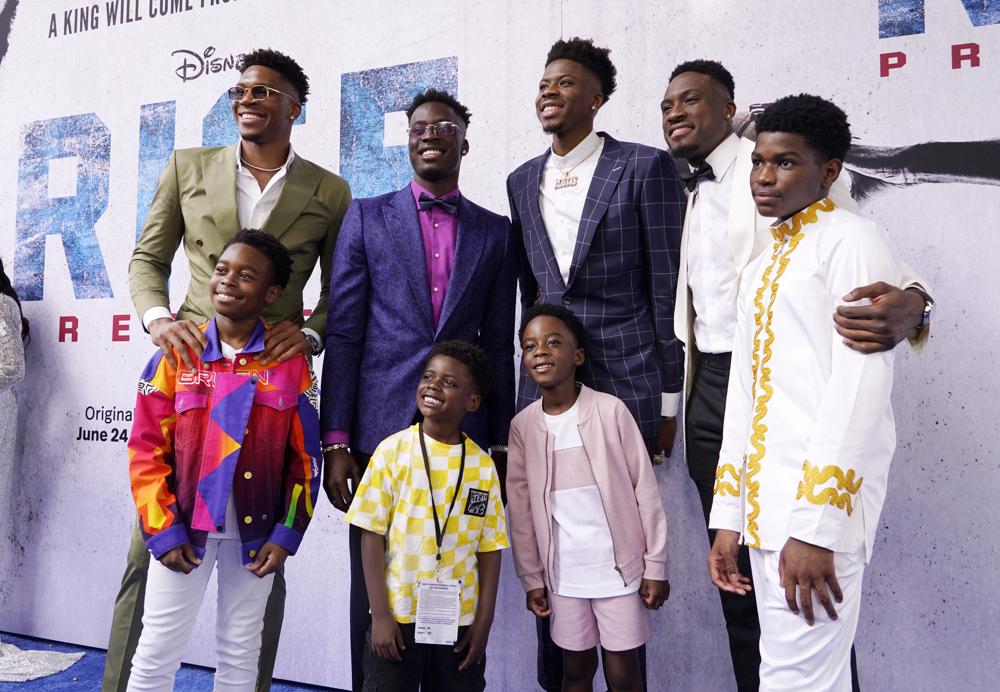 Giannis Antetokounmpo didn’t watch this year’s NBA Finals. The series he dominated last year like few players have was too stressful to view as a fan.

“Like, I get too tensed up, because I just start sweating on the couch,” Antetokounmpo said.

He prefers being on the court, especially because his brother plays with him.

Antetokounmpo took up basketball in Greece with his brother Thanasis and they are still together now on the Milwaukee Bucks – who have a few players who know what it’s like to have siblings in the NBA.

“Me and Thanasis were playing on the same team for more than 10 years. So, it’s almost like two co-workers going to work every day,” Antetokounmpo said in an interview with The Associated Press. “I don’t see him as my brother when I’m at work. He does his job, I do my job, but obviously when the game is over, when the practice is over, we spend time together, as much as we can.

“He makes my life way easier.”

Their other three brothers are elsewhere in the world. But the difficulties their family faced while living in Athens has kept them close, a story that’s told in “Rise,” which debuts Friday on Disney+.

The movie includes some highlights from the 2021 NBA Finals, when Antetokounmpo averaged 35.2 points, 13.2 rebounds and 5.0 assists in leading the Bucks to their first championship in 50 years. But he said the film, for which he served as an executive producer, isn’t really about basketball.

“No, this is a movie about my dad and my mom,” Antetokounmpo said, “the sacrifices they made, how dedicated they were to providing for us, the difficulties that they faced every single day in their lives and the fear they had when they were walking the streets of Athens.

Charles and Vera Antetokounmpo moved from Nigeria to Athens, leaving their oldest son with family, but were never able to obtain Greek citizenship, which continued to provide disappointment and danger, even though the other four sons were born in the country. Basketball eventually provided the security they could never get when Giannis entered the 2013 NBA draft and was selected by the Bucks with the No. 15 pick.

One of the worst teams in the NBA when he arrived, the Bucks have become one of the best behind Antetokounmpo, a two-time NBA MVP. Teammate Jrue Holiday has two brothers playing in the league and center Brook Lopez’s twin Robin even spent a season with the Bucks.

“But it’s crazy, I don’t know if there’s ever been brothers that played on the same team or played against one another ever in the NBA as much as the Milwaukee Bucks.”

Another brother, Kostas Antetokounmpo, won a title with the Lakers in 2020 before playing professionally in France, while Alex plays for the Toronto Raptors’ NBA G League affiliate. That makes it hard for siblings who once slept in the same bed to be together often, though the four brothers did join their mother at the premiere this week.

“A lot of people ask me, ‘Hey, would you change your childhood, would you like to have a different life than the life you had and the upbringing you had?’” Antetokounmpo said. “Like, no way, no way, because that’s what makes us who we are today.”

TOP PHOTO: Top row, from left, brothers Giannis, Alex, Kostas and Thasis Antetokounmpo pose alongside the actors who portray them, bottom row from left, McColm Celphas Jr., Jahleel Kamara, Aaron Kingsley Adetola and Chinua Baraka Payne at the premiere of the Disney+ film “Rise,” Wednesday, June 22, 2022, at Walt Disney Studios in Burbank, Calif. The film is based on the story of the Antetokounmpo family, who emigrated from Nigeria to Greece before Giannis, Thanasis and Kostas found success in the National Basketball Association. (AP Photo/Chris Pizzello)