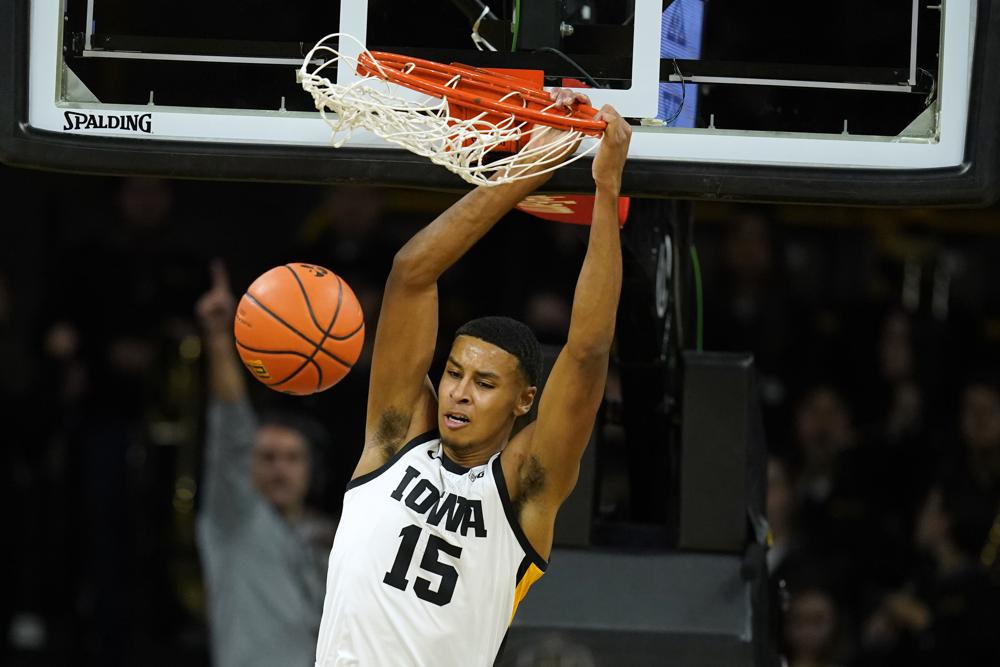 Forwards are expected to dominate Thursday’s NBA draft, starting with the trio of Gonzaga’s Chet Holmgren, Auburn’s Jabari Smith and Duke’s Paolo Banchero. They are the headliners at the position and have been widely ranked as the top prospects overall with their size and open-floor potential.

Here’s a look at the draft’s top forwards:

The nation’s No. 1 recruit lived up to expectations for the Zags as a second-team Associated Press All-American.

STRENGTHS: The 7-foot, 195-pound Holmgren has an unusual mix of fluid perimeter skills with a roughly 7-5 wingspan. He averaged 14.1 points, 9.9 rebounds and 1.9 assists while shooting 60.7% alongside a returning AP All-American in Drew Timme.

He made 39% of his 3-point tries and had 14 games with at least two made 3s, showing the kind of consistency sure to pull less-mobile bigs from the basket. And he has the ball-handling skills to take advantage — just look at his length-of-court, behind-the-back drive for a dunk against UCLA for proof — for unique shot-creating potential in such a long frame.

“I definitely see a lot of things in the NBA style of game that I feel like I can thrive in,” Holmgren said Monday, “with the spacing, with the speed … you’re getting up and down for 48 minutes. So I definitely think I have a lot of tools that are suited for that.”

At the other end, Holmgren proved an elite rim protector, ranking fourth in Division I with 3.7 blocks per game.

CONCERNS: He needs to get stronger. He struggled at times with physical play and could use the added bulk for finishing through contact, too.

The 6-10, 220-pound freshman was a second-team AP All-American who helped the Tigers claim their first-ever No. 1 ranking.

STRENGTHS: The 19-year-old Smith is a rangy forward with potential to impact both ends of the floor. He averaged 16.9 points, 7.4 rebounds and 2.0 assists with ability to play in the post or step outside, where he shot 42% from 3-point range with a quality jumper. He also made 79.9% of his free throws to convert when drawing fouls. He also averaged 1.0 blocks and 1.1 steals with the versatility to chase multiple positions, making him ESPN’s No. 2 overall prospect.

“I just see myself defending, affecting winning and just doing whatever a team needs me to do,” Smith said. “Spacing the floor, knocking down shots, running the floor, and just showing all assets to my game.”

CONCERNS: Smith shot just 42% overall with heavy reliance on his jump shot, so he could use a bit more development with creating off the drive and improving his ball handling (1.9 turnovers per game) for easier looks.

The 6-10, 250-pound freshman was the Blue Devils’ focal point in a Final Four run under now-retired Hall of Fame coach Mike Krzyzewski.

STRENGTHS: The 19-year-old Banchero averaged 17.2 points and 7.8 rebounds with the strength to tussle inside and mobility to roam the perimeter. Ranked as ESPN’s No. 3 draft prospect, the AP third-team All-American was comfortable snatching down a rebound and leading the break. And his skillset proved particularly effective in being able to overpower smaller defenders, move around less-mobile bigs and score in the midrange with polish.

Banchero said Friday he feels he is “the best player in the draft, I feel like I showed that throughout the year.” Duke associate head coach Chris Carrawell said he thinks Banchero should be go No. 1 overall, too.

“For a non-guard at his size, he can create shots from the inside and out,” Carrawell said. “That’s rare.”

CONCERNS: Banchero shot just 33.8% on 3-pointers, though he was better in the NCAA Tournament. He also had stretches when he could assert himself and impose his will even more, including going the final 7 1/2 minutes of the Final Four loss to rival North Carolina with no baskets and only two shot attempts. Banchero also needs to improve defensive consistency.

— KEEGAN MURRAY: While the Holmgren-Smith-Banchero trio could go 1-2-3, the Iowa forward and first-team AP All-American won’t be far behind. The 6-8, 225-pound Murray, who turns 22 in August, made a rapid rise from averaging 7.2 points as a freshman to 23.5 points and 8.7 rebounds while shooting 55.4% overall and 39.8% on 3-pointers. That all-around development has made him ESPN’s No. 5 overall prospect at a loaded position.

— JEREMY SOCHAN: The 6-9, 230-pound freshman offers defensive versatility and toughness in a developing game. ESPN’s No. 15 draft prospect averaged 9.2 points and 6.4 rebounds for Baylor, and turned 19 only last month.

— E.J. LIDDELL: The Ohio State junior has a strong frame (6-7, 243 pounds) ready to handle physical play. The AP third-team All-American averaged 19.4 points and 7.9 rebounds while shooting 49% from the field and 37% from 3-point range. Liddell is ESPN’s No. 20 draft prospect.

— JAKE LARAVIA: The 6-8, 227-pound junior made a quick impact at Wake Forest after transferring in following two years at Indiana State. He showed versatility while averaging 14.6 points and 6.6 rebounds and shooting 38% from behind the arc as a potential first-round prospect.