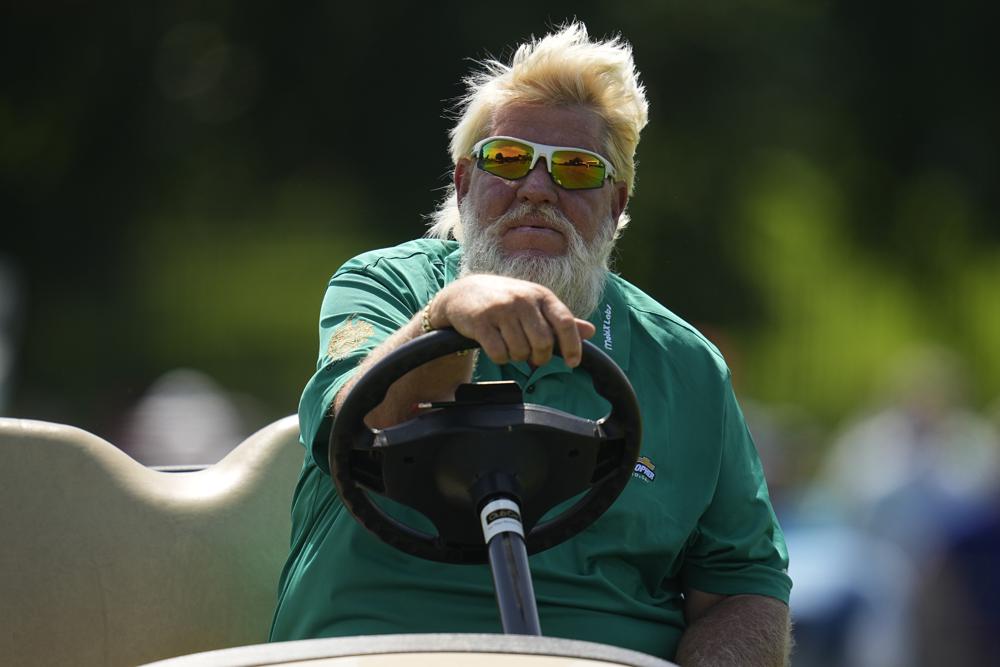 John Daly delivers another ride in PGA’s 1st round

John Daly delivers another ride in PGA’s 1st round

Shaggy John Daly produced yet another wild ride around a PGA Championship.

The 56-year-old two-time major champion, whose booming drives propelled him to win the PGA in 1991, drove the slopes and swales of Southern Hills in a golf cart the PGA allows him to use because of osteoarthritis in his right knee.

And first off the tee in the cool of morning, he quickly birdied the first hole. The came another on No. 5.

Nostalgia was in the air. Daly was on the leaderboard much of the round as he was greeted with cheers of “Go Big John” from a fan gallery that still loves his eccentric style, shock of thick white hair, bushy beard and a belly that hides his belt buckle.

Then came the late-round meltdown in the rising heat: four bogeys in the final five holes, including three in a row on Nos. 16-18. By the end, Daly’s 2-over 72 left him in no mood to talk and he skipped post-round interviews.

At least his cart didn’t cause him any problems. At the 2021 PGA Championship on Kiawah Island, Daly needed fans to help him get out of some sand when he got stuck. His biggest obstacles in Tulsa were a couple of water hazards he could drive around by going under the ropes and briefly into the gallery.

And he signed his scorecard. Daly was disqualified from the PGA Tour Champions Regions Tradition last week after failing to do that after the second round.

Arizona club pro Jesse Mueller started his first PGA championship with a jolt: an eagle on his first hole.

The general manager of the course at Grand Canyon University, where he is also a volunteer assistant coach, played his way into the tournament by winning the Walter Hagen Cup in April in Austin. The top 20 finishers at the club pro event qualified for Southern Hills

If there were any nerves Thursday, he didn’t show it.

With his wife and caddie Jessie watching, Mueller strode to the tee at No. 10 wearing a “GCU” shirt and coolly hit driver 327 yards to the landing area in front of a creek. Then he dunked the ball straight into the cup from 102 yards out.

The 39-year-old Mueller spent eight years trying to scratch out a career in pro golf before diverting to teaching and club work. He took five days off of work to come to Tulsa.

The PGA championship is his fifth career tour event and second major. He qualified for the 2012 U.S. Open and finished tied for 51st. His previous earnings total $39,940.

Eventually his round faded with three straight bogeys that left him 2-over for the day.

But Thursday’s opening eagle on a round that was two shots better than Tiger Woods? That’s a memory for a lifetime.

If someone is heading to the 18th in need of a birdie in the final round on Sunday — well, good luck.

The 490-yard par-4 finishing hole at Southern Hills, playing uphill and often into the wind, proved to be overwhelmingly the most difficult hole on the course through Thursday’s first round. There were just three birdies from the first 108 players through the meatgrinder, while 48 had made bogey, three made double and one fared even worse than that.

Will Zalatoris was among those who made bogey, one of just two during his sterling round of 4-under 66.

“On top of that, it’s the toughest green on the golf course,” he said of the 18th. “You want to be able to go into that hole on Sunday — whoever is going to win this tournament — you want to have a cushion. That hole is just a beating no matter what.”

TOP PHOTO: John Daly drives on the 16th hole during the first round of the PGA Championship golf tournament, Thursday, May 19, 2022, in Tulsa, Okla. (AP Photo/Sue Ogrocki)