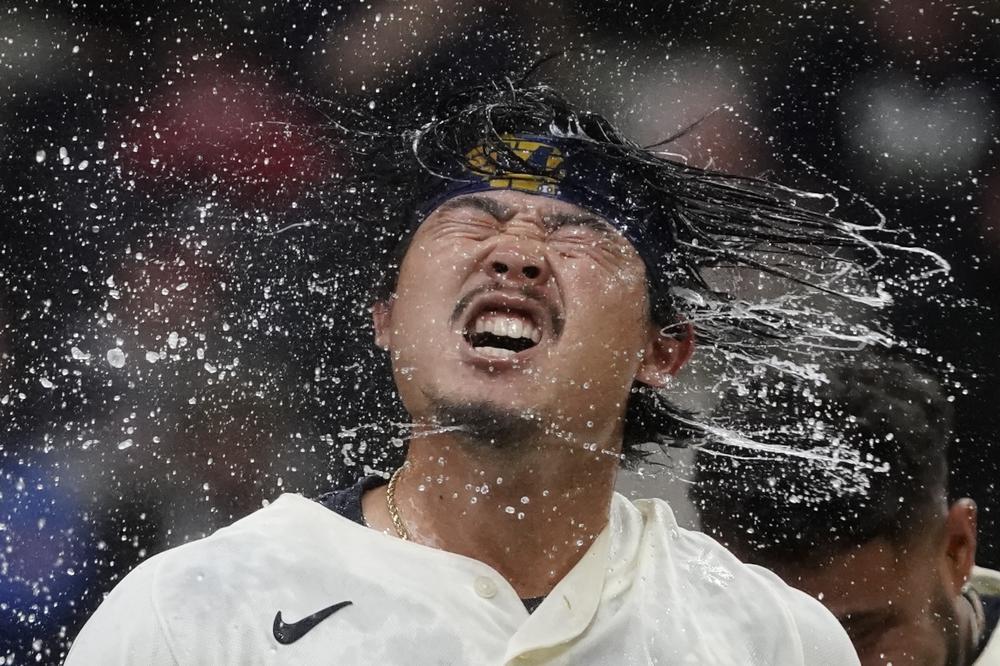 MILWAUKEE (AP) — Keston Hiura returned to the majors and hit a two-run, winning homer off Jesse Chavez in the 11th inning as the Milwaukee Brewers rallied from a four-run deficit to beat the Atlanta Braves 7-6 on Wednesday.

Bob Uecker on the call Friday on WKTY, as the Washington Nationals come to Milwaukee. Pregame for Brewers-Nationals begins at 6:35 p.m. Tune in on 96.7 FM / 580 AM

The Brewers had tied it with two outs in the ninth on an RBI triple from Kolten Wong.

Hiura, called up from Triple-A Nashville earlier in the day, l ed off the bottom of the 11th by sending a 1-2 sinker from Chavez (0-1) over the center-field wall. The drive scored automatic runner Jace Peterson.

Hiura was batting .216 with two homers when he was sent to the minors earlier this month.

Both teams scored in the 10th, and the Braves took a 6-5 lead when Travis d’Arnaud led off the top of the 11th with a single down the right-field line off Trevor Kelley (1—0) that brought home automatic runner Ozzie Albies from second.

Milwaukee made it 4-all in the ninth when Braves closer Kenley Jansen blew a save for the first time in 10 opportunities.

After falling behind 0-2, Wong worked the count full and then sent a liner into the right-field corner to bring home Peterson with the tying run. Peterson had drawn a leadoff walk and stole second with one out.

The Braves took a 5-4 lead in the 10th when automatic runner Ronald Acuña Jr. hustled home from second on a botched double-play attempt for an unearned run. Milwaukee tied it on Hunter Renfroe’s sacrifice fly.

Atlanta had grabbed a 4-0 lead when Austin Riley and Marcell Ozuna hit back-to-back homers off Corbin Burnes with two outs in the third.

The burst started when a pitch from Burnes glanced off Acuña’s arm and Matt Olson singled.

Riley then hit a slow roller that headed halfway up the third-base line before finally going foul, preventing an infield hit that would have scored Acuña.

What seemed like good fortune for the Brewers ended up being a tough break. On the next pitch, Riley sent a cutter from Burnes over the center-field wall for a 429-foot, three-run shot. Ozuna followed with a 409-foot drive to left for his second homer in as many days.

Riley has eight homers and Ozuna seven this season.

The Brewers cut the lead to 4-2 in the fourth as Tyrone Taylor and Rowdy Tellez produced RBI singles. Mike Brosseau’s two-out RBI double in the sixth made it 4-3.

The Brewers actually hit Fried harder than they usually do. Fried has allowed four earned runs in his last 31 innings against the Brewers, including six shutout innings in Game 2 of last year’s National League Division Series.

Burnes struck out seven and yielded four runs and seven hits in his six-inning stint.

Braves: Acuña was in the lineup for a second straight day and started at right field after filling a designated hitter role Tuesday. Acuña had missed five games with a sore groin.

Brewers: SS Willy Adames went on the injured list, retroactive to Monday, with a high left ankle sprain. … OF Andrew McCutchen remained out of the lineup. McCutchen rejoined the team Tuesday after dealing with COVID-19.

Braves: Off Thursday before starting a three-game series at Miami on Friday. RHP Charlie Morton (2-3, 4.93) will start for the Braves on Friday, while LHP Trevor Rogers (2-4, 4.45) pitches for the Marlins.

Brewers: Off Thursday before beginning a three-game home series with the Washington Nationals on Friday. Scheduled starters are RHP Erick Fedde (2-2, 4.24) for the Nationals and LHP Eric Lauer (3-1, 2.60) for the Brewers.

TOP PHOTO: Milwaukee Brewers’ Keston Hiura celebrates after hitting a walkoff two-run home run during the 11th inning of a baseball game against the Atlanta Braves Wednesday, May 18, 2022, in Milwaukee. The Brewers won 7-6. (AP Photo/Morry Gash)