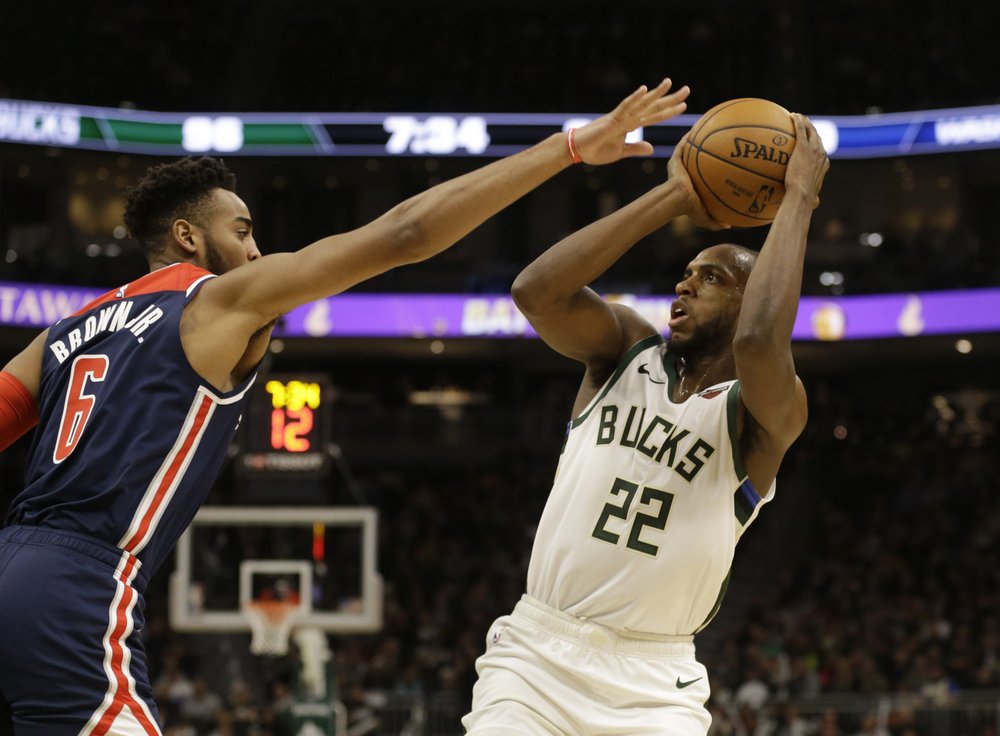 MILWAUKEE (AP) — Khris Middleton might not have been available for the Eastern Conference finals even if the Milwaukee Bucks had made it that far.

The three-time All-Star missed the Bucks’ last 10 games after spraining the medial collateral ligament in his left knee in Game 2 of a first-round series with the Chicago Bulls. Middleton sat out Milwaukee’s entire second-round series with the Boston Celtics, who beat the Bucks in seven games and open the conference finals Tuesday in Miami.

Middleton’s absence was an unfortunate turn of events for the Bucks, who benefited from injuries to other teams during their title run last season. The Bucks won a seven-game East semifinal with the Brooklyn Nets after injuries knocked out James Harden for most of the first four games and Kyrie Irving for the last three games.

The Bucks did lose Giannis Antetokounmpo to a knee injury for two games in the East finals, but he returned to become MVP of the NBA Finals.

“It just wasn’t our time,” forward Bobby Portis said. “All teams that go through a playoff stretch have luck along the way. We had our luck last year in some series that we went through with teams that went through some injuries.”

Boston was missing forward/center Robert Williams the last four games due to a bone bruise in his right knee, but that only underscored the Celtics’ superior depth.

Williams was replaced in the starting lineup by Grant Williams, who scored a career-high 27 points and tied a Game 7 record Sunday by sinking seven 3-pointers in the Celtics’ series-clinching 109-81 victory. None of the Bucks’ role players stepped up in a similar manner.

That forced the Bucks to depend even more on Antetokounmpo and Jrue Holiday.

Antetokounmpo was the first player to have 200 points, 100 rebounds and 50 assists in a playoff series. Holiday, who attempted more than 21 shots in a game just twice during the regular season, averaged 22 shots per game in the Celtics series.

They also must improve their playoff 3-point shooting.

Milwaukee ranked fourth in the league in 3-pointers per game (14.1) and fifth in 3-point percentage (36.6%) during the regular season. The Bucks made 38% of their 3-point attempts in their first-round series.

The Bucks’ challenge is finding the right guys to complement the trio of Antetokounmpo, Middleton and Holiday.

Milwaukee’s depth took a hit with the offseason departure of P.J. Tucker, now with Miami. The Bucks’ top offseason addition was Grayson Allen, who played well in the regular season and in a first-round playoff series against Chicago. But after going 3 of 6 on 3-point attempts against Boston in Game 1, Allen went 2 of 18 the next six games.

“In Game 1, I got three good open ones and knocked them down,” Allen said. “It felt like (Games) 2-7, the easy catch-and-shoot, spot-ups were very few and very hard to come by.”

At the trade deadline, the Bucks sent Donte DiVincenzo to Sacramento as part of a four-team deal that brought them Serge Ibaka, who fell out of the rotation by April. Portis and Pat Connaughton have player options for next season and could opt for free agency.

The Bucks still should continue competing for titles as long as their top three guys remain healthy, though age offers cause for concern.

The 27-year-old Antetokounmpo was one of the younger players in the Bucks’ rotation this season. Holiday turns 32 next month and Middleton turns 31 this summer. Brook Lopez is 34, Wesley Matthews 35 and George Hill 36.

This playoff exit should add motivation.

“Hopefully, this moment, instead of thinking that we lost something, we can gain and learn in order for us to put ourselves in position to win another championship,” Antetokounmpo said.