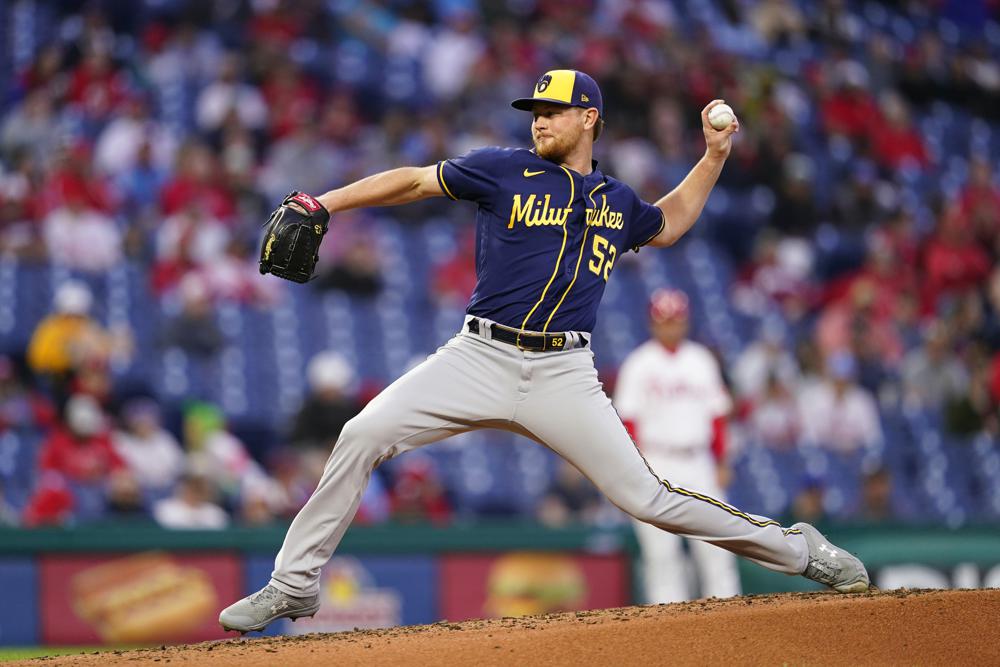 PHILADELPHIA (AP) — Eric Lauer held the lineup card autographed by his Milwaukee teammates, a worthy keepsake from the game of his career. He caught the Phillies flailing and frozen and — by the end — slugger Kyle Schwarber was fuming over a wide strike zone he blamed for a whiff-heavy game.

Lauer struck out a career-high 13 over six innings, Christian Yelich hit a sacrifice fly in the ninth and the Brewers beat Philadelphia 1-0 on Sunday night.

“I think it was as good as stuff has ever been working for me,” Lauer said.

Lauer and Aaron Nola took no-decisions in a pitchers’ duel that saw the starters combine for 22 strikeouts. Nola allowed one hit and struck out nine in seven shutout innings.

The Brewers finally broke through in the ninth against Corey Knebel (0-1). Jace Peterson singled leading off and moved to third on Andrew McCutchen’s one-out single. Knebel, who saved 57 games in five seasons with the Brewers, then gave up Yelich’s sac fly to left field that scored Peterson.

Devin Williams (1-0) worked the eighth and Josh Hader finished for his eighth save.

Schwarber erupted in disgust about a called third strike against Hader and was ejected in the ninth by plate umpire Angel Hernandez. Schwarber slammed his bat, slammed his helmet and wildly gestured at Hernandez in a highlight-worthy meltdown before he was cheered off the field. Both teams had issues with Hernandez all game.

“I’m not going to say he was good, because he wasn’t,” Milwaukee catcher Omar Narvaez said. “At least he was consistent for both teams. Sometimes you’ve got to adjust and don’t leave the decision to the umpire.”

Lauer gave up five hits, walked one and threw 66 of 98 pitches for strikes but could not get his second win. He joined Teddy Higuera as the only left-handers in Brewers history to strike out 13 batters in a game.

Lauer, who had 10 strikeouts over his first two starts, brought his best stuff against the Phillies. He struck out eight through four innings — including Bryce Harper twice.

Schwarber led off the fifth with a headfirst slide into second for a double and Alec Bohm walked. Lauer then matched his previous career high for Ks when he got Johan Camargo. He gave up a single and a foul pop out that left the bases loaded for Rhys Hoskins.

Lauer hit a career-best 10 strikeouts when he got Hoskins swinging on a 95 mph four-seam fastball to end the rally.

The Phillies were booed off the field.

Lauer struck out Harper for a third time leading off the sixth. Nick Castellanos whiffed on three pitches. J.T. Realmuto doubled, but Lauer escaped the inning by — yup — catching Schwarber on a called strike three.

“I loved going out there and being able to punch (out) guys,” Lauer said. “I usually don’t do that. It’s a very good feeling knowing that maybe things are starting to come along.”

Lauer has a 22-24 career record but has seemingly turned his game around since the middle of last season. He went 4-1 after August last year to help the Brewers reach the playoffs.

“This is the show that he can put on,” Counsell said. “Against a good-hitting team, I think he showed everybody how’s he been pitching, really, the last four months of baseball.”

Nola took advantage of the generous strike zone and was just as sharp. He easily had his best start of the season — he allowed four runs in six innings on opening day — and needs more outings like Sunday to help put the Phillies in the postseason for the first time since 2011. Nola made his 115th start since 2018, the most of any pitcher during that span.

Jay Wright, who retired Wednesday as Villanova’s basketball coach, threw a ceremonial first pitch, along with successor Kyle Neptune. Wright won two national championships and went to four Final Fours with the Wildcats, including this year.

The Brewers head home for one game Monday against San Francisco. LHP Sam Long (0-0, 0.00 ERA) will start for San Francisco, and the Brewers send Cy Young Award winner Corbin Burnes (1-0, 2.37) to the mound. The teams will play the other two games of the originally scheduled series in a Sept. 8 doubleheader.

The Phillies open a four-game series at home against Colorado. They send RHP Kyle Gibson (1-1, 3.57 ERA) to the mound against LHP Kyle Freeland (0-2, 7.71). Harper will likely stay at designated hitter as he plays with a mild strain in his right elbow.