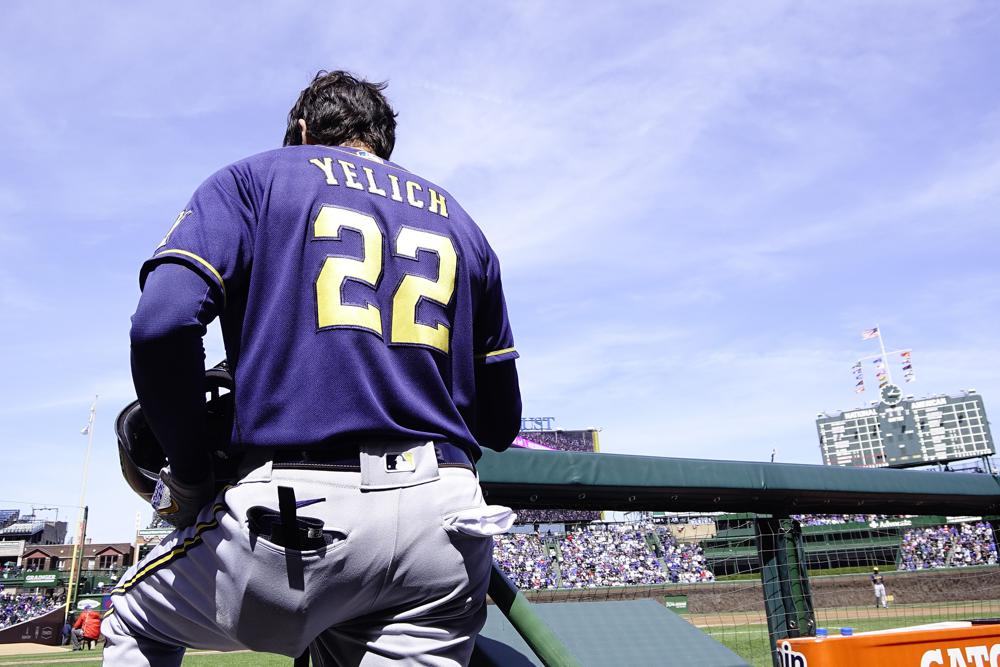 CHICAGO (AP) — Mike Brosseau cheered for the Chicago Cubs as a kid growing up in Northwest Indiana. He estimated that he went to about 50 games at Wrigley Field as a fan.

So yeah, Sunday was a super fun day.

Brosseau’s first career pinch-hit homer snapped a tie in the seventh inning, and the Milwaukee Brewers beat the Cubs 5-4 for their first victory of the season.

Brosseau was acquired by Milwaukee in a November trade with Tampa Bay. He had never played at Wrigley as a major leaguer before appearing in the Brewers’ first two games.

With his parents and some high school buddies in the stands for the series finale, the 28-year-old infielder put Milwaukee in front with a drive to center against Daniel Norris (0-1) for his first hit with his new team.

“Really cool. Yeah, definitely,” Brosseau said. “Kind of looking back on it now after it set a little bit, you can kind of see how cool of a story (it is).”

Brad Boxberger (1-0) worked the seventh, stranding a runner on third when Jonathan Villar was retired on a close call at first base that was upheld by a replay review. Devin Williams then got three outs before Josh Hader pitched a 1-2-3 ninth for his first save.

“It’s one of our strengths, to try to shorten games and have those guys be really solid at the end of games,” manager Craig Counsell said.

Seiya Suzuki hit his first major league homer for Chicago, and Marcus Stroman pitched five effective innings in his Cubs debut. The Cubs were trying to go 3-0 for the first time since 2016.

With two outs and runners on first and second in the first, Suzuki drove a 3-1 pitch from Peralta deep to center field. Suzuki, who signed an $85 million, five-year contract with the Cubs last month, also had three RBIs during Saturday’s 9-0 win.

“I feel like I’m still trying to find the perfect balance in my at-bats and trying out different things every day,” he said through a translator. “I feel like I’m quite not there yet in terms of my adjustments.”

Stroman, who finalized a $71 million, three-year contract with Chicago on Dec. 1, allowed one run and two hits, delighting the crowd of 32,858 on a sunny afternoon.

“The energy from the second I stepped out there on the field was amazing,” he said. “To see everyone come out and get there early is the energy I look to pitch off all year.”

The right-hander exited with a 3-1 lead, but the Brewers jumped all over Jesse Chavez in the sixth. Yelich doubled home Adames, and Tellez hit a one-out drive to right-center for his first homer of the season.

The Cubs tied it at 4 on two wild pitches by Jake Cousins with two outs in the bottom half, but the Brewers went ahead to stay on Brosseau’s 17th career homer.

Peralta, who went 10-5 with a 2.81 ERA for Milwaukee last year, allowed three hits, struck out six and walked four in four innings.

It was a tough opening series for the Brewers’ front three starters of Corbin Burnes, Brandon Woodruff and Peralta. They yielded 13 earned runs and 10 walks in 12 2/3 innings.

Cubs: OF Ian Happ rested after he exited Saturday’s victory when he was hit on the left knee by a pitch in the seventh inning. “He’s doing all right,” manager David Ross said. With the off day on Monday, Ross said it just made sense to give Happ another day. … LHP Wade Miley (elbow inflammation) felt good after playing catch Saturday, according to Ross. He was slated to play catch again before taking Monday off. … RHP Alec Mills (low back strain) was scheduled to throw a simulated game in Arizona on Sunday.

Cubs: Following an off day, LHP Drew Smyly starts Tuesday at Pittsburgh. The 32-year-old Smyly went 11-4 with a 4.48 ERA in 29 games, 23 starts, for Atlanta last year. Former Cubs LHP José Quintana pitches for the Pirates in their home opener.