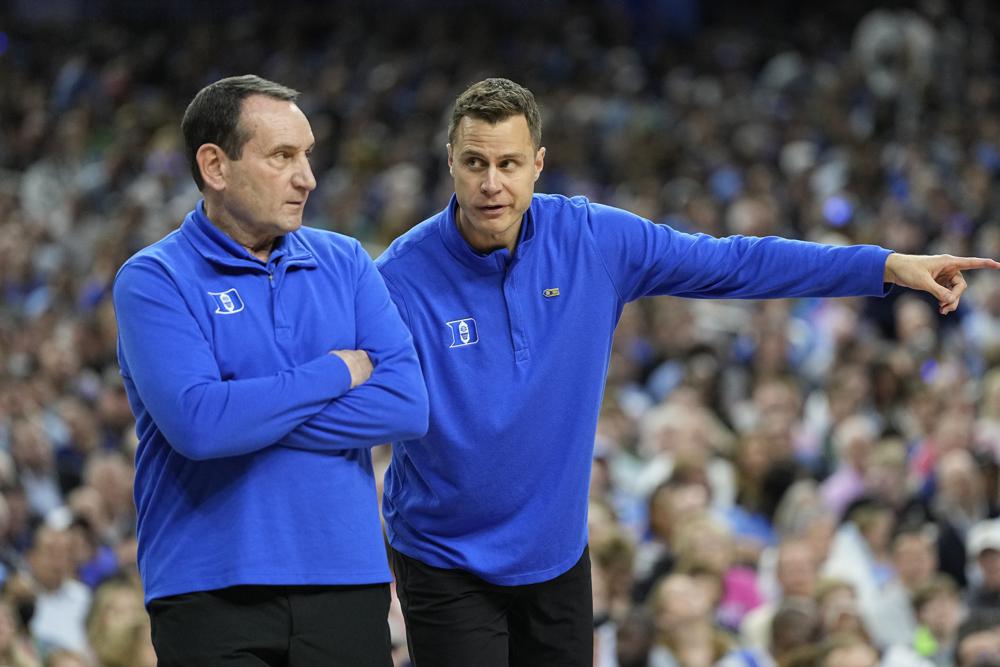 NEW ORLEANS (AP) — Jon Scheyer tried to soak up every possible nugget and detail he could as retiring Mike Krzyzewski’s designated successor in their final season together on the Duke sideline. Conversations on everything from game strategy to motivating players turned into an endless stream of notes and ideas, studiously documented on his iPad.

“He’s got his madness with all his papers everywhere,” Scheyer said with a chuckle. “And I’ve got my iPad. It’s all right there.”

Now it’s time for the former Blue Devils player to call on every bit of that knowledge and experience. As of late Saturday night, Scheyer is Duke’s new head coach after a Final Four loss to North Carolina ended Krzyzewski’s Hall of Fame career. And Scheyer, 34, knows he’s taking over at a crossover to sustain the Blue Devils’ perch near the top of college basketball.

“I’ve really just positioned it for (recruits) where it’s as pivotal of a moment in any program in the history of college basketball,” Scheyer told a small group of reporters before the UNC loss. “I really feel that if you look through, there have been different teams in different eras that have been the best. But to sustain it, this is Duke’s opportunity to continue to do that.”

The Blue Devils have been building to this moment since Krzyzewski’s announcement last June that he would coach one final season, representing a seismic change that comes along only generationally with greats like John Wooden, Phog Allen or Dean Smith.

Scheyer was tabbed as the coach-in-waiting, extending his long-running Duke ties dating to his 2006 campus arrival, including as the leading scorer on the 2010 NCAA title winner and Krzyzewski’s staff member since the 2013-14 season.

Scheyer has thrice stepped in for his mentor to guide Duke to wins, once last season due to COVID-19 protocols and twice this year against Wake Forest — the second coming after halftime — when Krzyzewski was ill.

“He’s better prepared to be the head coach after going through this year,” Krzyzewski said earlier this week, adding: “He’s not good. He’s like really, really good.”

That endorsement and belief means a lot to a former player like Arizona State coach Bobby Hurley, the point guard on Krzyzewski’s 1991 and 1992 NCAA championship teams.

“That carries a lot of weight to it, certainly,” Hurley said Sunday. “Not only does (Krzyzewski) know how to identify talented players, but he knows when someone has the right stuff to be prepared for that type of responsibility.

“There’s no one that loves Duke basketball more than Coach K, so everyone should just be on board to know that he wouldn’t really make a decision like that or be involved in it if he didn’t think it was in the best interest of the program.”

Scheyer aims to keep the conversations going with Krzyzewski, even though he expects the 75-year-old retiree will “try to never be around” to give Scheyer space to make this program fully his own.

“I just know him, and he’s going to be so sensitive to what his presence does,” Scheyer said of Krzyzewski. “For me, I guarantee this summer, I’m going to call him one day and say, ‘Can you please come to a practice and watch us, and see what you think?’

Besides, Scheyer and his staff had already taken over recruiting duties fully while Krzyzewski stayed with the team in his final season.

One look at his first recruiting class illustrates the perfect-case scenario for how things could go, and why the Blue Devils aren’t going anywhere anytime soon even as the sport’s winningest coach leaves the game.

Duke will be stacked again with the nation’s No. 1-ranked class according to 247sports. That includes the top overall prospect Dereck Lively II (7-foot-1 center from Bellefonte, Pennsylvania), No. 3 prospect Kyle Filipowski (6-11 center from Wilbraham, Massachusetts) and No. 5 prospect Dariq Whitehead (6-6 wing from Newark, New Jersey).

The first weeks on the job for Scheyer will include getting back to recruiting while also beginning work to hire an assistant coach to fill his own now-vacant position. He must also figure how many of the current players will return, with NBA prospects like Paolo Banchero and A.J. Griffin possibly taking the one-and-done route to the pros.

Change is coming. Scheyer is ready for it.

“In a lot of ways, I feel more prepared than any coach ever because I’ve known and I’ve been able to prepare for this specific job,” he said. “And in other ways, I don’t know what to expect a little bit.