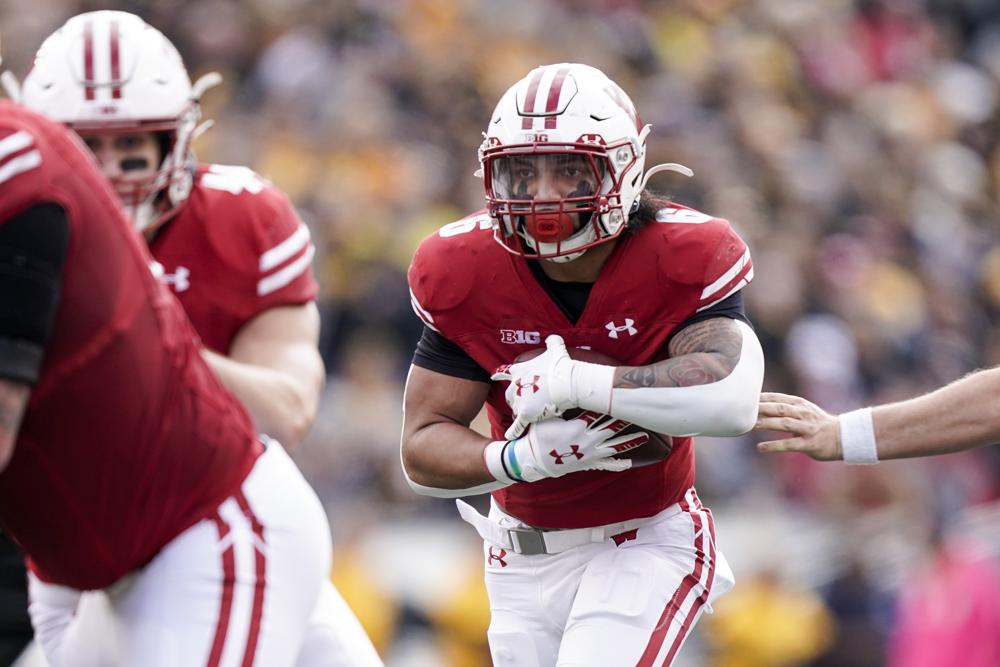 Badgers’ Mellusi hopeful he can be ready for start of season

Badgers’ Mellusi hopeful he can be ready for start of season

Rodgers tore the ACL in his right knee in March 2019 but was playing for Clemson less than six months after undergoing surgery. Mellusi is hoping to be ready for the start of the 2022 season after tearing his left ACL last November.

“I kind of wanted to know what he did, what his regimen was,” Mellusi said Monday. “He told me the things he did. I was really interested in learning from him about that.”

Mellusi, who played for Clemson from 2019-20, rushed for 815 yards and five touchdowns in nine games with the Badgers last year before getting hurt in a Nov. 6 victory at Rutgers. The injury knocked him out for the rest of the season and is sidelining him for spring practice, which began last week.

“My goal is to be available Sept. 3,” Mellusi said, referring to the date of Wisconsin’s season opener against Illinois State. “That’s the plan.”

While Mellusi expressed confidence about being ready for the start of the season, new Wisconsin running backs coach Al Johnson said there’s no specific timetable on a potential return date.

“There are signs that it’s coming along well,” Johnson said. “We’re hopeful that it’ll be here before too long. But the exact date, sometimes you just don’t know as you progress through on that. From everything I’ve heard, it’s normal schedule.”

Whenever Mellusi returns, he will look a bit different.

“I kind of channeled all that frustration and all the things I was kind of going through and just put it in the weight room, honestly,” Mellusi said.

Mellusi isn’t the only Wisconsin running back returning from a season-ending injury. Isaac Guerendo played just four games last year before an injured left foot shut him down for the rest of the season.

Guerendo also expects be ready for the start of the 2022 season.

“I’m running like three times a week,” said Guerendo, who had 23 carries for 160 yards last season. “Each time I run I feel a little bit better. It’s been reassuring that I’m making progress every day. Obviously there’s still soreness, but it’s been a good soreness.”

Wisconsin is hoping the return of Mellusi and Guerendo can take some of the pressure off Braelon Allen, who ran for 1,268 yards and 12 touchdowns as a freshman last season. Allen totaled 93 carries in the four games that Mellusi missed, including 29 in a Las Vegas Bowl victory over Arizona State.

“Honestly, it will make my job a whole lot easier,” Allen said. “Being able to put all three of us in different spots around the field, it’s going to be tough for defenses to stop.”

TOP PHOTO: FILE – Wisconsin running back Chez Mellusi (6) is pictured during the first half of an NCAA college football game against Iowa, Oct. 30, 2021, in Madison, Wis. Mellusi says he has reached out to former Clemson teammate and current Green Bay Packers wide receiver Amari Rodgers for advice on recovering from a torn anterior cruciate ligament. (AP Photo/Andy Manis, File)

0
0   0
previous Which QB will be the first taken in the NFL Draft?
next Cy Young Award winner Burnes to start Brewers’ season opener
Related Posts