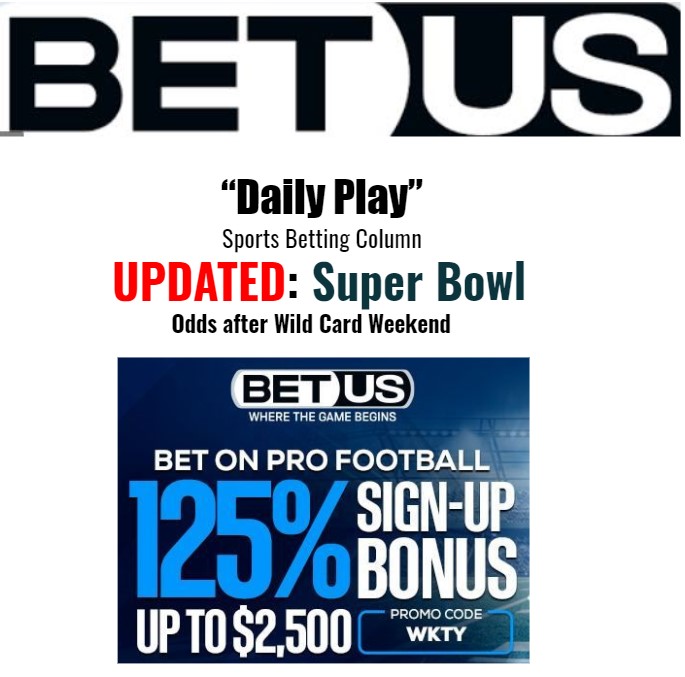 Ahh yes, and then there were eight! With the Divisional Round set to kick-off Saturday with the Titans hosting the Bengals and followed up with the Packers welcoming in the 49ers to the frozen tundra of Lambeau Field, it’s time to take a look at the UPDATED Super Bowl Odds courtesy of our sports betting partner BetUS.

The Packers and the Titans are both number one seeds heading into the divisional matchup, but from a betting perspective that’s about where the similarities end. The Packers enter the divisional round as the Super Bowl favorite at +350, while the Titans own the third-best odds in the conference and third-worst among the remaining playoff teams at +850. Green Bay is -230 on the moneyline to beat the San Francisco 49ers this weekend to advance to the NFC Championship, which are the most favorable odds of any matchup on the slate. Tennessee is -180 ML to beat Cincinnati.

According to BetUS (and most books around the world) the Kansas City Chiefs are in with the second lowest odds to win it all at +400. What will be fascinating to watch unfold over the weekend is the matchup between the Kansas City Chiefs and Buffalo Bills at Arrowhead Stadium. After the Packers, both of those AFC clubs are the biggest favorites to win the Super Bowl, so we will see one heavy hitter go down. Both Josh Allen and Patrick Mahomes threw five touchdowns during Super Wild Card Weekend, so this could be a high-flying offensive display on Sunday.

After a weekend of blowouts, which was not expected by most, the Divisional Round will most assuredly be filled with tighter contests, closer scores and tons of action. If you’re feeling strongly about one of the eight teams left in the race, sign up with the official sports betting partner of the WKTY Morning Show (BetUS) and use the promo code WKTY on sign-up. When you do you’ll receive a 125% deposit match up to $2,500.00. Good luck and have fun!