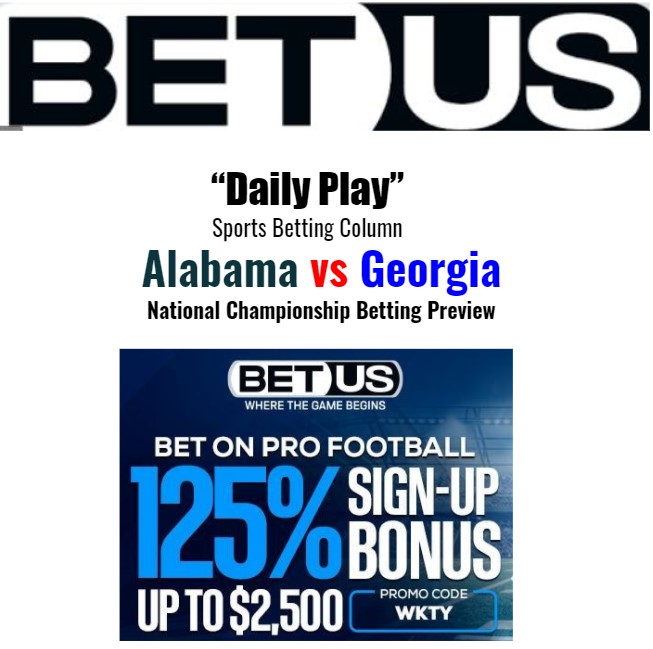 Tonight the culmination of the College Football season see’s the #3 Georgia Bulldogs (-2.5) take on the #1 Alabama Crimson Tide (+2.5) at Lucas Oil Stadium in Indianapolis.

The Bulldogs opened as (-2.5) favorites in Las Vegas and off-shore sites and has mostly held steady at that number, however, some sites are offering the Bulldogs (-3). The total on tonight’s game has likewise held pretty steady opening at 53 and moving down just a shade to 52 ½ (as of this writing).

In a preview from the Locker Room on BetUS the head to head matchup between Georgia and Alabama in the SEC Championship game was broken down:

Alabama has won seven straight meetings after its come-from-behind 41-24 triumph for the SEC championship on December 4. The Crimson Tide, who were a jaw-dropping six-point underdog in the college football spreads, trailed 10-0 after the first play of the second quarter before responding with a 38-7 run. The decisive burst was highlighted by Heisman Trophy winner Bryce Young’s three touchdown passes — two totaling 122 yards to junior wide receiver Jameson Williams — and capped by junior safety Jordan Battle’s 42-yard interception return for a score. Alabama’s run against Georgia includes three SEC title games and a 26-23 overtime triumph in the 2017 season CFP final. The last two meetings — both by 41-24 scores — have gone over.

Alabama’s advantage against Georgia in this rematch evolves from one of the same it had in the SEC Championship Game — not just at quarterback or head coach, but in the experience that this 2021 Crimson Tide team has had during the year. While Georgia steamrolled through its competition only lightly-tested, Alabama had to win in different ways all throughout the back half of the season. The Crimson Tide have won low-scoring grinders and high-scoring shootouts. They’ve needed a 97-yard game-tying touchdown drive just to keep their title hopes alive. There are very few game scripts where Alabama will find itself in new territory, and that confidence in being able to overcome any in-game setback is a mental edge that powers my pick. Pick: Alabama +2.5