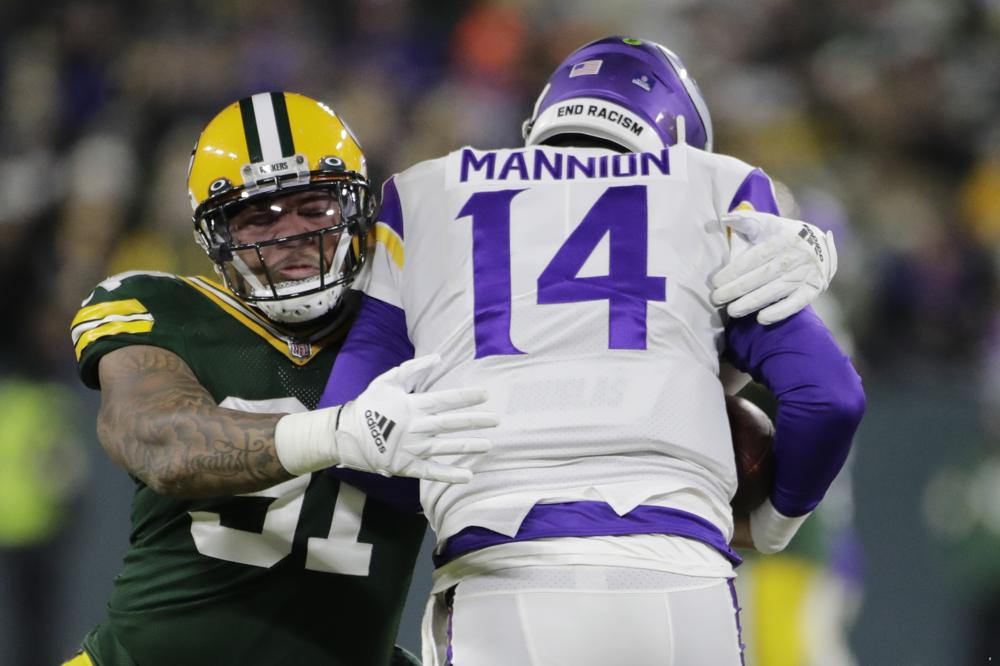 By the end of Sunday night, the Vikings’ playoff hopes were dead.

Two nights after their starting quarterback was placed on the reserve/COVID-19 list, the Vikings fell 37-10 to the NFC North champion Green Bay Packers. Minnesota’s loss, coupled with Philadelphia’s 20-16 victory at Washington earlier in the day, clinched a playoff berth for the Eagles and eliminated the Vikings from playoff contention.

“Disappointing because this team fights so hard,” said Sean Mannion, who started in place of Cousins. “All season long, we fight for all 60 minutes, so that’s what makes this so gut-wrenching.”

This marks the first time since coach Mike Zimmer’s arrival in 2014 that the Vikings (7-9) have missed the playoffs in back-to-back seasons.

The Vikings had won their last two matchups in this series, representing the Packers’ only losses to NFC North opponents in Matt LaFleur’s three-year coaching tenure. But they couldn’t come close this time as Green Bay clinched the No. 1 seed in the NFC playoffs.

Minnesota made a habit all season of playing close contests with 15 of its first 16 games being decided by eight points or fewer, the lone exception being a 30-17 victory over the Seattle Seahawks on Sept. 26. But the Vikings couldn’t keep this one competitive.

“Give them credit,” Zimmer said. “They’re a good team and they got after us tonight.”

Green Bay (13-3) scored the game’s first 20 points while the Vikings went three-and-out on five of their first seven possessions.

“There’s a lot of teams that have had to deal with similar situations in the last two years with COVID, and so that’s not really an excuse,” tight end Tyler Conklin said. “We really just couldn’t find our rhythm early as an offense and just struggled to get things going. Obviously, it’s hard not to have Kirk out there, but you’ve got to face adversity and overcome stuff sometimes.”

Cousins threw for 341 yards and three touchdowns in a 34-31 victory over the Packers on Nov. 21. Mannion went 22 of 36 for 189 yards with one touchdown pass in his third career start, and first since the final week of the 2019 regular season.

Mannion came out of the game in the fourth quarter for one series due to a cramp in his throwing hand.

“Certainly losing a guy like Kirk, he’s had an unbelievable year, an unbelievable career,” LaFleur said. “That’s not a knock against Sean. I’ve got a lot of respect for Sean. It’s just he doesn’t have the experience that Kirk has. It was unfortunate for them. It was definitely to our benefit.”

With Cousins on the COVID list and star receiver Adam Thielen on injured reserve, the Vikings’ other top playmakers couldn’t produce the way they had in prior matchups with the Packers.

Dalvin Cook ran for 163 yards, caught two passes for 63 yards and scored four touchdowns in the Vikings’ 28-22 triumph at Lambeau Field last season. Cook was limited to 13 yards on nine carries Sunday as the Packers outrushed the Vikings 174-27. The Vikings’ top rusher was Mannion, who ran for 14 yards on two attempts.

“I don’t think we stuck with it enough, to be honest with you,” Zimmer said about the running game. “We got away from it.”

Justin Jefferson caught 10 passes for 169 yards and two touchdowns when the Vikings beat the Packers in Minnesota this season. Jefferson had six receptions for 58 yards in the rematch.

One of the Vikings’ biggest plays of the night came from center Garrett Bradbury, who set up Minnesota’s lone touchdown by producing one of the season’s most unusual highlights. Mannion threw a pass to Conklin, who took a big hit from safety Adrian Amos that knocked the ball loose. Bradbury alertly grabbed the ball in the air and ran upfield to get credited with a 21-yard reception.

On the next play, Mannion threw a 14-yard touchdown pass to K.J. Osborn.

That’s the only time the Vikings would reach the end zone.