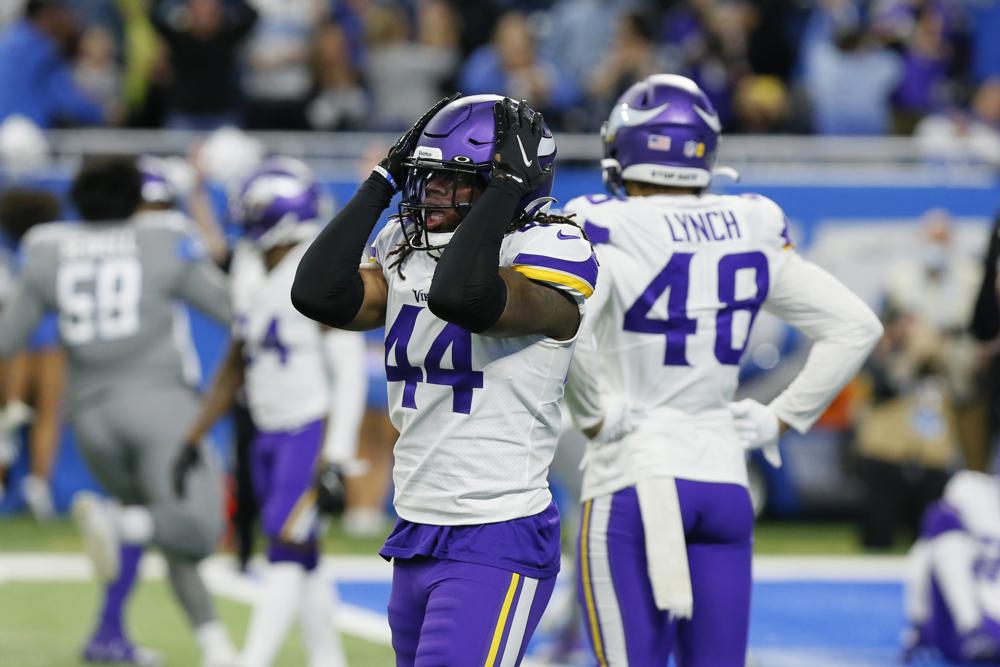 DETROIT (AP) — The Minnesota Vikings are perfectly aware of what they wasted on Sunday afternoon.

Needing a win to maintain a solid chance at an NFC playoff spot, they had things under control. With 1:50 to play and a 27-23 lead, all they had to do was stop the winless Detroit Lions from driving 75 yards with no timeouts.

They couldn’t do it.

“I know there’s supposed to be a 24-hour rule about thinking about games, but this one is going to bother me for years,” Vikings safety Harrison Smith said. “We have a short week with another game on Thursday, so we have to move ahead, but this hurts.”

The strategy for beating Goff this season has been fairly simple: Bring pressure and force him into small gains or big mistakes. Minnesota got three sacks and forced Goff into a pair of turnovers, but the Vikings changed up on the last drive.

Instead of trying to keep serious pressure on Goff, the Vikings rushed three and dropped eight defenders into a soft zone. As a result, he was able to keep Detroit moving with short passes over the middle – his one obvious strength.

“In hindsight, we would have loved to have gotten more pressure on him, but I didn’t think we were covering very well,” Vikings coach Mike Zimmer said. “I thought we needed more people in coverage than we did up front. Obviously, that didn’t work.”

Detroit’s longest play on the winning drive was 13 yards, and even that was a short pass that Godwin Igwebuike caught over the middle and broke down the sideline. After 11 frustrating weeks, Goff had finally found a team he could beat with a thousand paper cuts.

The Vikings were still in good shape with 23 seconds left, with the Lions facing third-and-6 at the 26, but T.J. Hockenson’s 10-yard catch got the first down. After a spike, Goff hit St. Brown, who got out of bounds at the 11 with 8 seconds left.

Goff missed Josh Reynolds on his first shot at the end zone, leaving :04, but the Vikings chose an odd coverage scheme on the final play. Despite eight defenders knowing the Lions had to get a touchdown, St. Brown was able to get into the end zone in front of Vikings cornerback Cameron Dantzler.

With only three rushers, the Vikings left Goff plenty of time to make the winning throw to St. Brown. In a fourth quarter that had seen him turn over the ball twice, the much-maligned quarterback managed to damage Minnesota’s postseason chances.

“We forced two takeaways in the fourth quarter and the offense went down and got us the lead,” Smith said. “All we had to do was execute for one more drive, but we didn’t do it.”

The loss leaves Minnesota at 5-7 with a home game against the Pittsburgh Steelers on Thursday night.

“This isn’t going to be a loss you forget about,” Vikings quarterback Kirk Cousins said. “But we’re all professionals here. We know we have to be ready on Thursday.