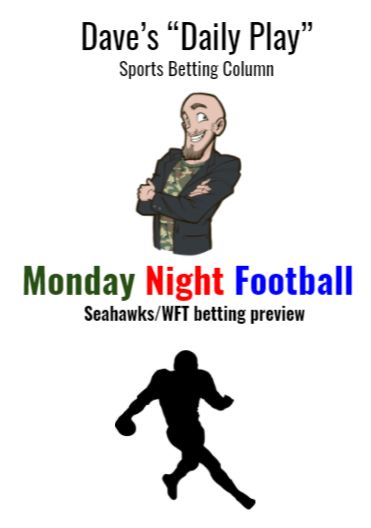 Week 12 in the NFL concludes tonight on Monday Night Football with the Seattle Seahawks going to Washington to face the “Football Team” as both clubs attempt to claw their way into a possible playoff spot.

For Washington, a season that was supposed to be spearheaded by Ryan Fitzpatrick at quarterback and a defense led by Chase Young at defensive end hasn’t gone according to script with Fitzpatrick out since the first half of Week 1 and Chase Young being lost to season ending ACL injury in Week 10 versus Tampa Bay. That Washington is still “in” the race for the NFC East with a record of 4-6, winners of two in a row, isn’t so much surprising as it is a tell on the NFC East and the very tenuous hold the Cowboys have on the division with a record of 7-4.

Seattle is coming into tonight’s matchup a bruised and battered team who’s seen Russell Wilson get shut out for the first time in his career against the Packers in Week 10, losing to division foe Arizona by 10 in Week 11 and face the real possibility of finishing below .500 for the first time in Wilson’s career with a record through 11 weeks of 3-7. If Seattle has any hope, any chance, or any prayer at being something other than a massive and wild disappointment it’s going to need to change tonight in Washington.

** For the season, the Seahawks are 27th in passing offense as they average 200.2 yards per game through the air while they are 23rd in the league in rushing offense with 98.4 yards per contest. Seattle is 24th in the league in scoring offense with an average of 19.4 points per game while they stand 7th in scoring defense by allowing 20.9 points per contest. Russell Wilson is 124 of 191 passing for 1,564 yards with 10 touchdowns and three interceptions. He is third on the team with 102 rushing yards plus a score though he has been sacked 20 times.** (winnersandwhiners.com)

A number of outlets including (VegasInsiders.com) (gamingtoday.com) feel like tonight should be a play on the Seahawks with most extolling the virtues of Pete Carroll’s coaching, Russell Wilson’s ability to still “get it done” and the thought that the Washington Football Team would be riding too high of a win over the Panthers in Week 11 as reasons to take SEA on what has now become a PICK ‘EM. My thoughts however don’t lead me to that conclusion, but rather to the TOTAL of tonight’s game at 46.5 (BetMGM) and to the UNDER play.

The UNDER for both the Seahawks and WFT have been a hit this season, but particularly with the Seahawks who according to (Covers.com) are in line for another low-scoring affair, and will ultimately see my play (UNDER the total of 46.5).

If tonight’s game does get to be higher in scoring, watch for the Washington Football team to prevail. If Seattle can keep the game lower scoring, control possession of the game clock, and have Russell find his groove, the Seahawks should win.

No matter who wins however, we’re getting to that part of the NFL season when we can really start to see which teams will rise, which will fall. The true contenders are beginning to emerge, and the true pretenders are also being figured out.