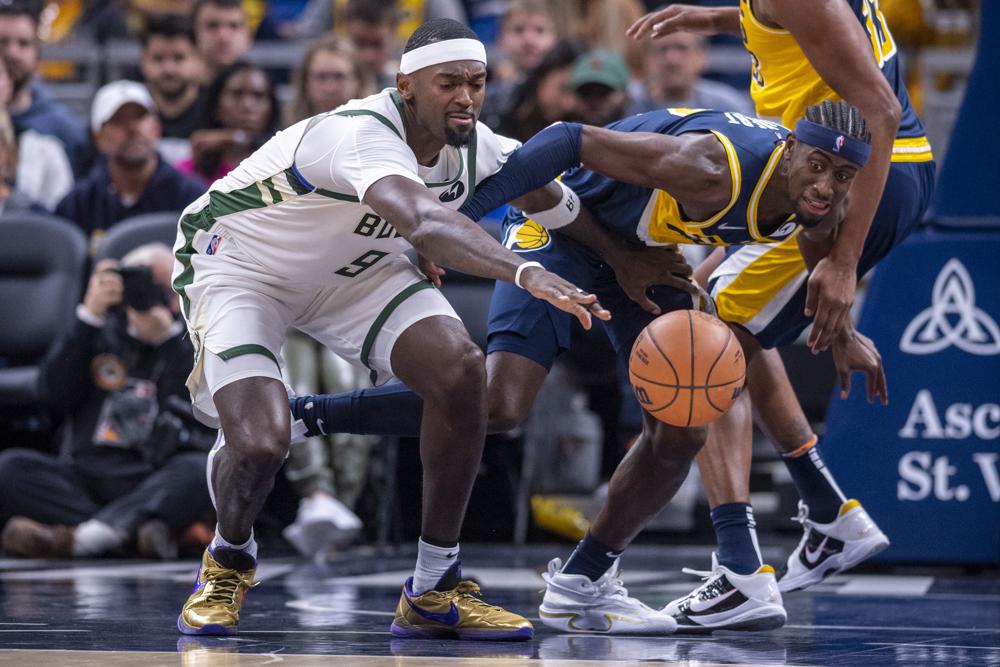 INDIANAPOLIS (AP) — Giannis Antetokounmpo had 26 points and 13 rebounds and the Milwaukee Bucks extended their winning streak to seven, routing the Indiana Pacers 118-100 on Sunday night.

The Bucks led by five at halftime and pulled away with a 39-27 third quarter. Guard Jrue Holiday scored 11 of his 23 points in the quarter.

“We’re playing together and everybody is contributing,” Holiday said. “It’s been fun.”

Much like the surging Bucks, who improved to 13-8, Holiday has been hot in averaging 19.7 points in the last four victories. He also had nine assists and seven rebounds against Indiana.

“Being able to go through the things we went through last year was huge,” Holiday said of winning the NBA title. “We know we can make a run at any time.”

Bobby Portis scored 15 points, Khris Middleton and Pat Connaughton each had 14, and Indianapolis native George Hill added 13 for the Bucks.

“We didn’t have enough in the tank tonight,” Pacers coach Rick Carlisle said. “We just had a very difficult night.”

Caris LeVert led the Pacers with a season-high 23 points. Malcolm Brogdon had 16.

“They’re the champions,” said the Pacers’ Justin Holiday. “It’s going to be a tough game against them every time.”

In reference to multiple reports that the Bucks have signed veteran center DeMarcus Cousins, coach Mike Budenholzer acknowledged a lack of depth at center because Brook Lopez has played only one game due to a back injury.

“When you look at the depth chart and look at how we’re subbing, depth at the big position is something that we could use,” Budenholzer said.

Bucks: Extended series winning streak against Pacers to six games … Antetokounmpo has led the team in scoring in 17 games and in rebounding in 16 games.

Pacers: After a season-high 12 assists Friday night in a home win over Toronto, Brogdon had just two. … Domantas Sabonis scored a season-low four points on 1-of-8 shooting.

Pacers: At Minnesota on Monday night.

0
0   0
previous RECAP: Minnesota chops down No. 18 Wisconsin 23-13 to take back Axe
next 4th-down miscommunication dooms Vikings in loss to 49ers
Related Posts