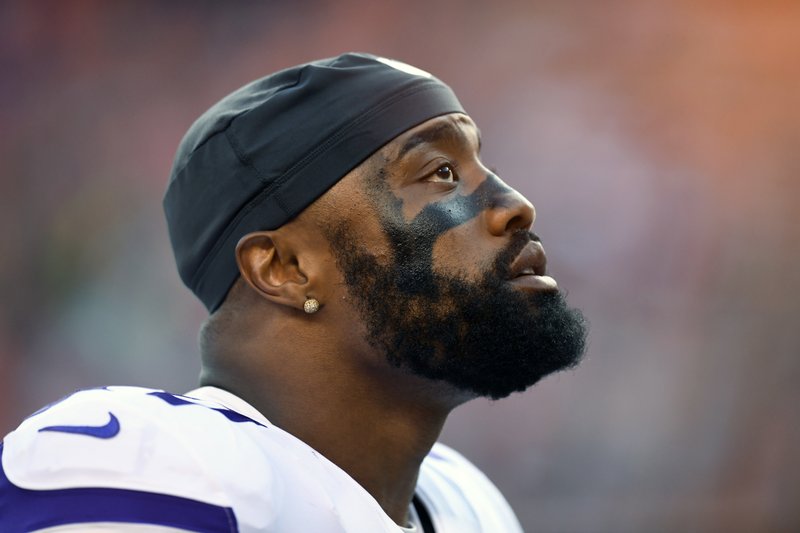 EAGAN, Minn. (AP) — The Minnesota Vikings have made mental health support an organizational priority, an investment that only became more important with Everson Griffen’s frightening experience three years ago.

The condition of mental illness never truly goes away, as the Vikings were reminded Wednesday. The team was relieved when Griffen emerged from his home without incident hours after he called 911 in a frenzy believing people were trying to kill him.

“We feel with the situation that we got him the necessary help he needs,” general manager Rick Spielman said. “He’s in the care of medical professionals.”

The Vikings have an emergency action plan they enhanced in 2018 after Griffen needed care in the aftermath of a similarly scary situation and took a five-game leave to recover. The plan came in handy after middle-of-the-night messages Griffen posted on Instagram made public his struggle.

Griffen posted screenshots of urgent text messages to his agent, Brian Murphy, that were pleas for help because he said people were trying to kill him. He also posted a video depicting him with a gun — he said it was purchased legally — as he moved around his house in Minnetrista, a lakeside suburb west of Minneapolis. Those posts were deleted.

“We have the resources necessary that, when there are issues that pop up, we’re able to support each other and we’re able to take care of each other,” Spielman said about two hours after Griffen was taken away by ambulance to a health care facility for treatment.

Minnetrista police, in a news release, said officers responded to a 911 call at 3 a.m. from Griffen at his residence. Griffen said on the 911 call that there were intruders in the home and that he fired a shot but no one was hurt. When police arrived, no intruder was located. Responding officers determined Griffen was alone in the house.

The Vikings sent psychologists to work with police on coaxing him out. The Vikings announced the situation “ended peacefully” with Griffen coming out nearly 11 hours after the 911 call. Spielman was camped outside, facilitating communication and praying for the best.

“I can’t tell you how fortunate we are to have the mental health team we have in place that was there with me and to watch the law enforcement groups and how they handled the situation,” Spielman said. “I was, I don’t want to say floored or surprised, but so impressed with how everybody worked together and handled a very difficult situation.”

Griffen, a three-time Pro Bowl pick, missed five games in 2018 as he dealt with his mental health.

According to police at the time, Griffen had made comments about people trying to kill him. He was involved in a disturbance the day before a game at a local hotel, then later showed up shirtless at teammate Trae Waynes’ house. Griffen was taken to a hospital, but he jumped out of the ambulance at one point before police talked him back in.

Griffen was never arrested or suspected of committing any crimes, but he underwent a mental health evaluation. He then went on a team-supported leave, returning later in the season and finishing with 5½ sacks in 11 games. In an interview two years later with the NFL Network, Griffen said he spent the last three months of that 2018 season living in a sober house.

Fresh off two straight wins that put the Vikings in control of a playoff spot, the mood was somber at the team facility. Running back Dalvin Cook and defensive tackle Sheldon Richardson both said they’d tried to reach Griffen on his phone, but had not heard back from him when they addressed reporters before practice.

“We’re just trying to make sure he’s OK,” Cook said. “That’s our brother first, and we want to make sure his family is OK and make sure he gets the proper treatment and love that he needs to get through the time that he’s going through right now.”

Said co-defensive coordinator Andre Patterson, who has coached Griffen on the defensive line for seven years: “Everson is like a little brother to me. I just want him to be safe.”

Griffen rejoined the Vikings this season after playing for Dallas and Detroit in 2020. He played for Minnesota from 2010-19 after being drafted in the fourth round out of USC. The 33-year-old has five sacks in nine games this season.

Griffen and his wife, Tiffany, have three children. He posted a moving tribute to her on Instagram on Tuesday, in honor of their youngest child’s birthday, 4-year-old Sebastian.

The Vikings were focused on Griffen’s well-being, not about his absence from the lineup, but their defensive line is already depleted. As for whether Griffen would play Sunday when the Vikings face the San Francisco 49ers, coach Mike Zimmer said: “No, that’s really not our concern right now. It’s really about him.”

Defensive tackle Dalvin Tomlinson was placed on the COVID-19 reserve list Tuesday and will not play the 49ers. Nose tackle Michael Pierce injured his elbow almost two months ago and will miss at least one more game. Defensive end Danielle Hunter is out for the season with a torn pectoral muscle.