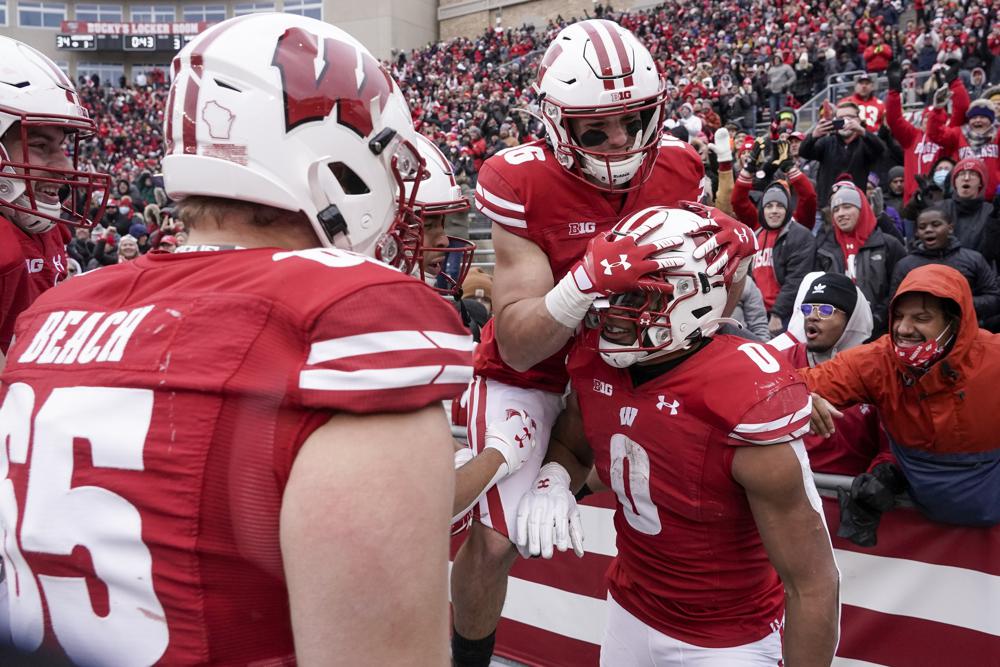 No. 19 Wisconsin seeks 7th straight win as it hosts Nebraska

No. 19 Wisconsin seeks 7th straight win as it hosts Nebraska

Line: Wisconsin by 7 ½, according to FanDuel Sportsbook

Wisconsin is chasing its seventh straight victory and aiming to remain in control of its destiny in the Big Ten West Division race. The Badgers clinch a spot in the Big Ten championship game if they beat Nebraska and then win at Minnesota on Nov. 27. Nebraska has lost its last seven meetings with Wisconsin and is trying to beat the Badgers for the first time since 2012. The Cornhuskers have lost four straight overall.

Nebraska quarterback Adrian Martinez vs. Wisconsin’s defense: Martinez has 10,418 career yards of total offense and is 272 yards shy of Tommy Armstrong Jr.’s school record. He has rushed for 502 yards and 12 touchdowns and thrown for 2,512 yards and 13 scores this season. Wisconsin has allowed the fewest yards per game (211.4), yards per play (3.72) and yards per carry (1.9) of any FBS team.

Nebraska: WR Samori Toure: In Nebraska’s last game, Toure caught four passes for 150 yards – including a 72-yard touchdown – as the Cornhuskers threw a scare into No. 5 Ohio State before falling 26-17. Toure has 33 catches for 718 yards this season. The closest thing Wisconsin’s top-ranked defense has to a weakness is the occasional tendency to allow a long pass play.

Wisconsin: LB Jack Sanborn. He and teammate Leo Chenal form arguably the nation’s top inside linebacker tandem. Chenal’s been the one producing more big plays this season, but Sanborn also is playing extremely well and had four tackles for loss last week in a 35-7 victory over Northwestern. He has seven tackles for loss over his last four games.

Nebraska had last week off and is playing its first game since head coach Scott Frost fired four offensive assistants and agreed to restructure his contract on Nov. 8. … Not only does Wisconsin lead the nation in run defense and total defense, it ranks second in scoring defense and pass defense. … Nebraska LBs Luke Reimer and Nick Henrich are aiming to become the first Cornhuskers teammates to post 100 tackles in the same season since Barrett Ruud had 149 and Demorrio Williams had 128 in 2003. Reimer has 96 tackles and Henrich has 87.

TOP PHOTO: Wisconsin’s Braelon Allen is congratulated by teammates after running for a touchdown during the second half of an NCAA college football game against Northwestern Saturday, Nov. 13, 2021, in Madison, Wis. (AP Photo/Morry Gash)