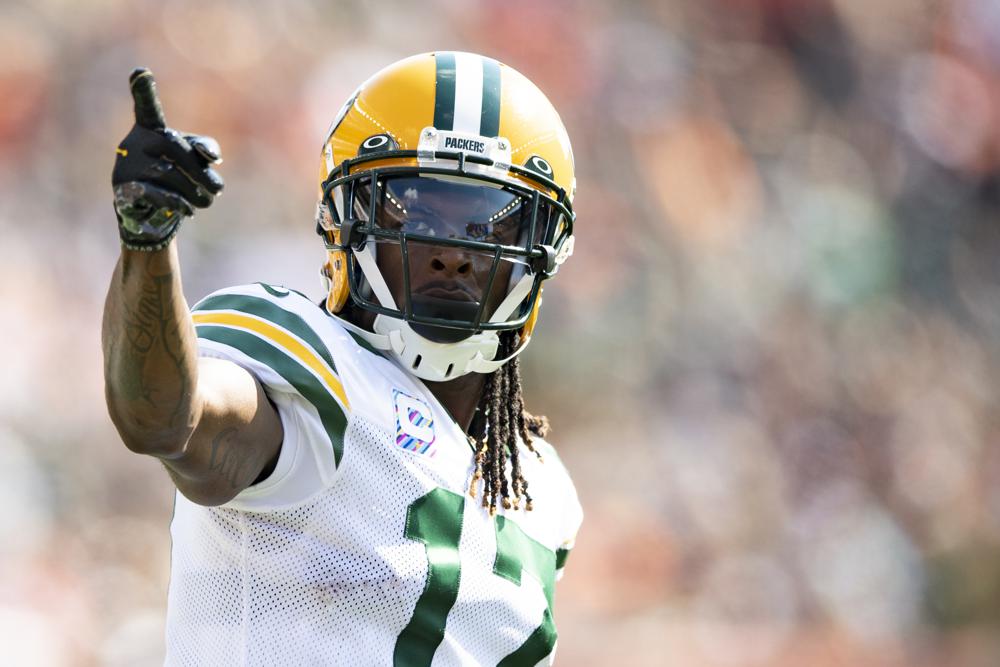 GREEN BAY, Wis. (AP) — Green Bay Packers wide receiver Davante Adams says he occasionally is in the process of making a catch when he flashes back to a similar play he made months or years earlier.

Two hours of Packers pregame begins at 10 a.m. Sunday with Wayne Larrivee and Larry McCarren. Kickoff at noon against the Bears. Tune in on 96.7 FM / 580 AM. Two more hours of postgame follows.

Packers opponents must be feeling a similar sense of déjà vu this season as Adams continues producing at a level that could earn him All-Pro honors for a second straight season.

Last year, Adams became the first player in NFL history to have at least 100 receptions and 18 touchdown catches in the same season. Although he has only reached the end zone twice this year, Adams is on pace to exceed last year’s totals in catches and yards receiving.

“He’s got people draped all over him and it doesn’t matter,” Packers coach Matt LaFleur said after Adams had a career-high 206 yards receiving Sunday in a 25-22 overtime victory at Cincinnati. “He finds a way to do it every time.”

Adams said after that game that he had told a few relatives beforehand he felt he might get a career high.

He also talked about how he sometimes catches a pass and subconsciously thinks back to plays he’s made before. Adams referred to it as “some weird ‘That’s So Raven’ (stuff)”, a reference to the Disney Channel sitcom from the early 2000s featuring a teenage girl with psychic abilities.

Adams went into more detail about that Wednesday. He said it happens maybe a few times a year, usually on long-developing plays like deep patterns.

“I’ll be running, the ball will be in the air and I’ll feel like I’ve been in that moment before,” Adams said. “It’s basically déjà vu, like an active déjà vu, I guess you could say.”

Sometimes the flashbacks aren’t about catches he has made. They also can be about hits he’s absorbed. He cited an example from his college career at Fresno State.

“Literally in the air, as I was flipping, (I was) thinking about how that same thing happened before against Nevada,” Adams said. “Same type of situation. I like it more when it happens on positive plays, but sometimes I’ll have it when I’m getting flipped in the air, too.”

Adams said he doesn’t recall this ever happening to him during his childhood. The flashbacks occurred as he got older.

“I think I had to kind of grow into that superpower,” Adams quipped.

This season also has revealed one of Adams’ other talents: his ability to stay focused.

Adams, who is in the final year of his contract, said at the start of training camp he wouldn’t let any concerns about his future distract him this season. Adams noted how he managed to avoid worrying about the draft his final season at Fresno State and responded by catching 24 touchdown passes that year.

He has lived up to those words while helping the Packers (4-1) win four in a row.

Adams heads into Sunday’s game at Chicago (3-1) with 42 catches for 579 yards to lead the NFL in both categories. Adams had a franchise-record 115 catches for 1,374 yards and 18 touchdowns last season.

“He’s just so talented,” quarterback Aaron Rodgers said after the Bengals game. “Even when you know that I’m probably going to him, he still finds a way to get open and makes a big catch and breaks a tackle. The guy is a special player.”

Adams still sees room for improvement. He wants to boost those touchdown totals.

“Every time I get an opportunity down there, whether I’m doubled or singled up, I’m going to try to come down with it,” Adams said. “Make sure we make them count.”